The case of Dioxins emitting municipal waste incinerator of Timarpur-Okhla Waste Management Co Pvt Ltd (TOWMCL) of M/s Jindal Urban Infrastructure Limited (JUIL), a company of M/s Jindal Saw Group Limited owned by Prithviraj Jindal was listed before the National Green Tribunal (NGT) for hearing on November 12, 2014 for the 17th time. After these 17 hearings in the NGT and 28 hearings in Delhi High Court, the Justice Swatanter Kumar, Chairperson led bench after hearing all the counsels issued the following, among other directions in the matter of NGT Application 22 of 2013 (THC)//SVRWA & Ors. V/s State of NCT of Delhi & Ors: 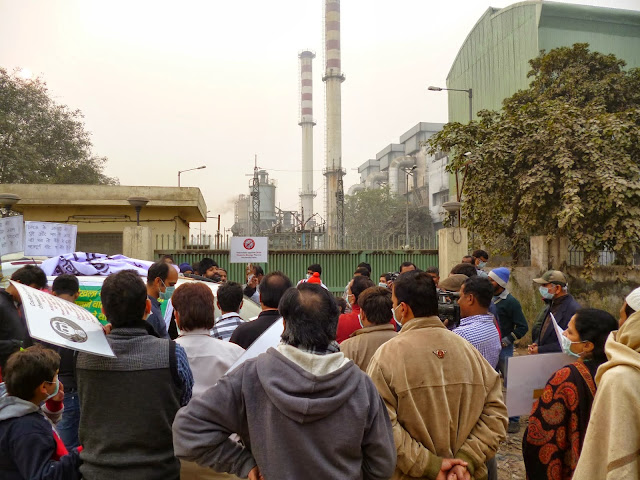 Rakesh Kumar Matwa, the Advocate for Applicants made the following submissions to the Tribunal:
(a) That the MSW plant has a design default due to which inspection of the same cannot be carried out during the night time.
(b) That the plant ceases to emit smoke after information in that regard is provided to the Central Pollution Control Board (“CPCB”) officials leading to a justifiable suspicion in the minds of the Applicants about the existence of collusion between the MSW plant proponent and the regulatory agency viz., CPCB.
(c) The attention of the Hon’ble court was also drawn to certain photographs (annexed hereto), which show excess smoke emitted by the MSW plant on 17/10/2014, 21/10/2014, 26/10/2014 and 12/11/2014. This was in stark contrast to the submission of the counsel for CPCB that there was no pollution.
(d) The counsel for the Applicants gave a suggestion to the Hon’ble court that the situation could be improved if segregation of MSW was ordered to be carried out at the point of source or origin i.e. at the level of households, offices, hotels, etc.

It was pointed out to the NGT that the segregation of MSW at source at the household level has already been introduced in Mumbai.

The Tribunal was informed that installed capacity of the plant is in the excess of 2000 tons of MSW consumption per day. The trucks loaded with MSW can be spotted on the Delhi Mathura Road carrying plastics and other waste which on incineration release toxic gases such as dioxins and furans. It was submitted before the Tribunal that the large quantity of MSW brought to the plant daily is not capable of segregation by deployment of any number of persons at the MSW plant. It is, therefore, essential that appropriate directions be issued for segregation of Municipal waste at source or origin.

K K Rohtagi, the lawyer for the residents who are the applicants raised the issue of location of the plant in the residential area which creates a compelling logic for closure of the plant.