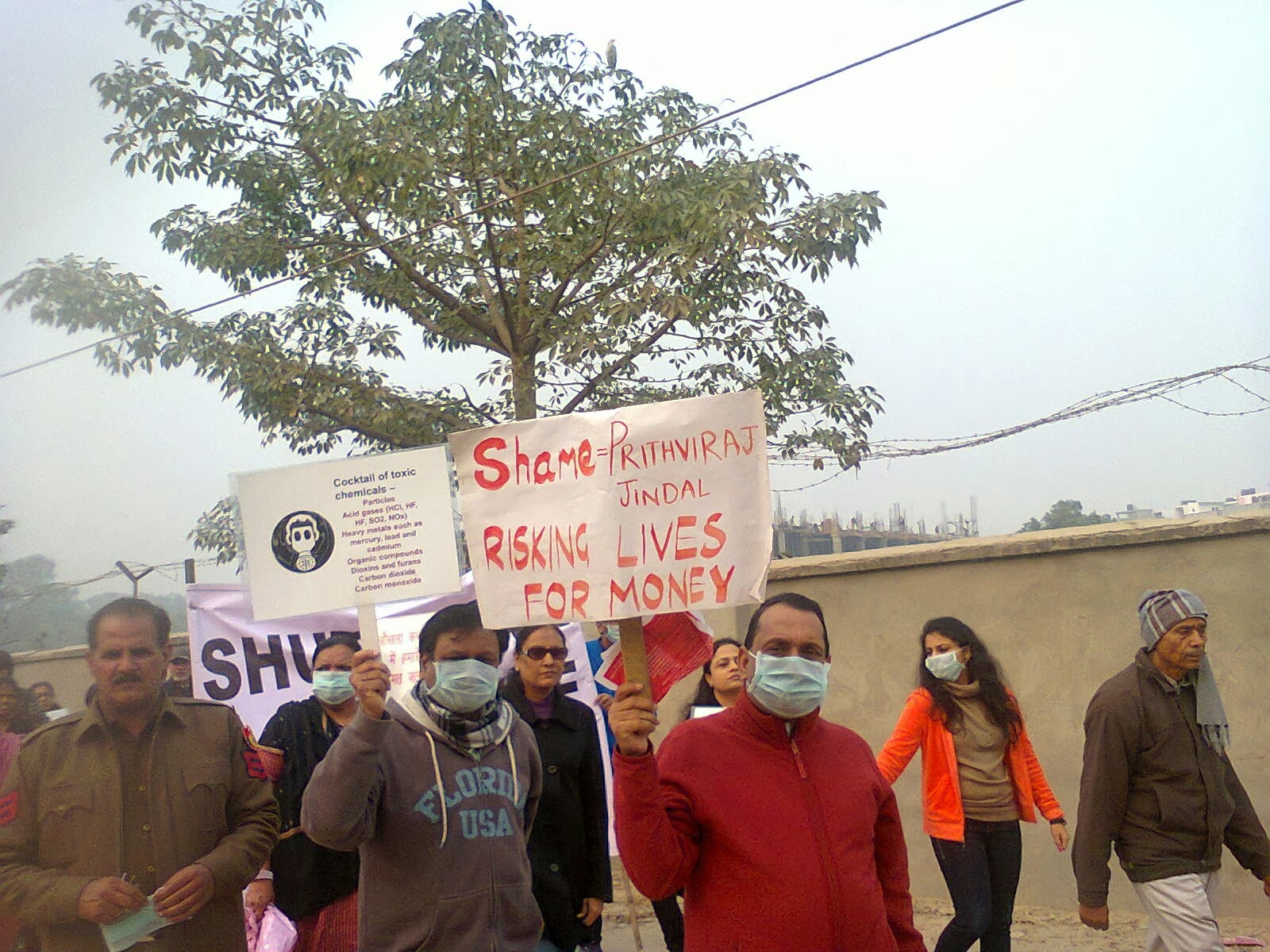 One of the main reasons for anxiety among residents and environmental groups is high dioxin levels around the plant. When CPCB monitored air quality there last October, dioxin level in stack 1 was 1.06ng TEQ/Nm3 (toxicity equivalent) and that in stack 2 was 0.93ng TEQ/Nm3 though safe level is 0.1ng TEQ/Nm3 only.

New Delhi: After 15 hearings in the National Green Tribunal (NGT) and 28 hearings in Delhi High Court, the matter of Dioxins emitting municipal waste incinerator of Timarpur-Okhla Waste Management Co Pvt Ltd (TOWMCL) of M/s Jindal Urban Infrastructure Limited (JUIL), a company of M/s Jindal Saw Group Limited owned by Prithviraj Jindal is listed for final disposal on 13th October, 2014 and 14th October, 2014. Environmental groups and residents have been demanding its stoppage and closure since March 2005. Admittedly, this plant has violated all the rules in the rule book with impunity. It is a classic case of environmental lawlessness in the heart of the national capital. The plant is operating without environmental clearance for its unapproved Chinese technology. The construction of the plant happened admittedly because of a fake public hearing.

On August 6, 2014, NGT heard the matter. CPCB submitted that it would file the report during the course of the day. It stated that the test in regard to Dioxineand Furan could not be conducted by the laboratory of the Board in as much as the laboratory was shut down for renovation etc.

NGT directed the CPCB to take the sample and get the same analyzed either from its own lab or any of its recognized laboratory and place the analysis Report before the Tribunal before the next date of hearing. Learned Counsel appearing for MoEF submits that he would take instruction s from the Ministry both in regard to the prescription of standard for PM as well as what is the fate of the Appeal preferred by the Project Proponent against the direction of the Board dated 3 rd July, 2014.

The pleadings in NGT are complete, even written submission on behalf of the Applicant have been filed.

It is noteworthy that there is a case pending in the National Human Rights Commission in this regard. The compliant pointed out that some 100 doctors wrote letters to the Prime Minister forewarning him of public health crisis in the Okhla residential areas and seeking protection from the war chemicals and other hazardous chemicals being emitted from the municipal waste incinerator plant located amidst Sukhdev Vihar, Hazi colony and other colonies. Prior to this Delhi High Court and Parliamentary Standing Committee on Urban Development has ruled against such hazardous incinerator/combustion technologies.  Such plants pose a grave threat to health and environment of the residential areas of Narela-Bawana and Ghazipur as well. This issue has been highlighted in an episode of Satyamewa Jayate.

Earlier, the Report of the Parliamentary Committee on Urban Development which has recommended that "Incinerator plants should be stopped in all residential areas in all metropolitan & Big cities across the country" in its latest report to the Parliament.

The report reads: "The Committee note that the Municipal Solid Waste is delivered by NDMC and MCD at the Okhla Power Plant site. Although it is claimed that "only non Hazardous Municipal Solid Waste will be treated at the facility", the fact is that Delhi's mixed municipal solid waste has characteristics of hazardous waste. MCD, Delhi government and Central Government have shown sheer callousness towards hazardous emissions from municipal incinerators that cause serious environmental and health problems to the people living not only near them but thousands of kilometers away from the source. The Committee feel anguished and dissatisfied with the reply of the Ministry that the soot in the atmosphere is reported to be within norms as it is monitored by Delhi Pollution Control Board. Therefore, the Committee recommend that these kinds of Waste Incinerator Plants should be stopped in all residential areas in all metropolitan & Big cities across the country."  It endorses the position of environmental groups and residents of Okhla.

The report states, "The Committee find that there are three major Sanitary Land Fill (SLF) sites in Delhi (Ghazipur, Okhla and Bhalaswa- Jahangirpuri,) which have turned into huge mountains of garbage and far exceeded their life span."

The fact is Okhla is not and has not been a landfill. There is some deep mischief at work in declaring it as landfill in papers.

The report states, "During the hearing held on 15th May, 2007 in the matter relating to the stay on Govt. subsidies for projects on recovery of energy from municipal solid waste, Hon'ble Supreme Court has permitted the Ministry of New and Renewable Energy to go ahead with setting up of 5 waste-to-energy projects to study the viability of such projects. Hon'ble Supreme Court also directed that no projects for waste-to-energy be taken up till 5 pilot projects are completed. As per the aforesaid direction, the Ministry of New and Renewable Energy formulated "Programme on Energy Recovery from Municipal Solid Waste for Setting-up of 5 Pilot Projects". The programme provides central financial assistance @ 2.00 crore per megawatt limited to Rs. 10.00 crore per project for 5 pilot set up by State Nodal Agencies, Urban Local Bodies/ Municipal Corporations or entrepreneurs. So far 5 projects have been approved in the cities Bengaluru, Hyderabad, New Delhi and Pune..."

More than 80 doctors from Holy Family Hospital in Okhla and some other hospitals across the city have written open letters to the Prime Minister's Office raising concerns about emissions from the Okhla waste-to-energy plant. In their letters, written on individual letterheads, doctors have said polluting emissions from the plant could lead to allergies, asthma, cancers and reproductive anomalies.  Many of these doctors also live close to the waste-to-energy plant. Central Pollution Control Board checks at the plant site have revealed dioxin emissions to be way higher than the permissible limit. Residents are extremely concerned about fly ash from the plant falling on their homes and vehicles. Delhi Pollution Control Committee issued a show cause notice to the plant in January for not meeting the air quality standard.

"An unusually large number of patients are coming in with respiratory ailments like asthma and bronchitis which can be attributable to the high levels of pollution in Okhla caused by the plant. The Holy Family Hospital has announced plans to launch a medical college. We would like it to function in an unpolluted environment," said Fr P A George, director of the hospital.

Neonatologist with Fortis La Femme Ashu Sawhney, who lives just behind the plant, said, "Based on my experience as a pediatrician as well as various studies, I can say such pollutants cannot just cause respiratory illnesses but also learning and behavioural problems. My daughter developed asthma last year".

Another pediatrician from AIIMS Shivani Randev said, "Most children from the area are suffering from respiratory illnesses. These pollutants can cause foetal anomalies, infertility, cancer and other health issues. This is a humble request from residents, especially doctors, from the area to please help us and shut down the plant."

The social cost of this technology as a large number of ragpickers stand to lose their jobs if waste-to-energy plants are widely adopted for waste management. Though they are common in the West, there is a raging debate even there about the suitability of waste-to-energy plants. In Delhi, the issue is even more relevant because there is no waste segregation at source which is why chances of non-biodegradable waste like plastics ending up in the incinerator is high.

This controversial killer plant is located in the vicinity of ecologically sensitive Okhla bird sanctuary and densely residential colonies in violation of all existing norms.