Subject- Request for judicial inquiry into the ongoing death and injury of migrant workers on Alang beach, Bhavnagar, Gujarat

Madam,
With reference to letter dated 15th July, 2014 Reference No. 5(2)/2012-MF, Union Ministry of Steel, Government of India (GOI) on the subject of “Migrant workers death and injury remains routine affair on Alang beach Bhavnagar, Gujarat” and the Minutes of the 17th meeting of the Inter-Ministerial Committee (IMC) on Ship breaking held on June 24, 2014, this is to draw your urgent attention towards the tragic deaths and injury of migrant workers on Alang beach, Bhavnagar, Gujarat on June 28, 2014 due to the accidents that took place at the Alang ship-breaking yard in plot number 140 while dismantling ship named PERIN and ship named MSC Socotra on Plot 41 respectively. This letter was sent to me in response to my letter dated 4.7.2014 addressed to Union Minister for Mines, Steel and Labour & Employment.

The GOI’s letter states “Police has filed criminal complaint under IPC Section 304 and 114 against occupiers, manager, safety officer and safety supervisor” in the matter of accident of June 28, 2014 in which several workers died and several were injured. On March 11, 2014 too, there were tragic deaths in Plot No. 20 at Gujarat's Alang beach in Bhavnagar.  It is high time guilty officials and ship breakers are made accountable.

I submit that the recent inspection Supreme Court constituted Inter-Ministerial Committee (IMC) on Shipbreaking team took note of non-existent environmental and occupational health infrastructure for the umpteenth time since 2004. It is sad that recommendations of IMC from 2004 to 2014 onwards have not been implemented. 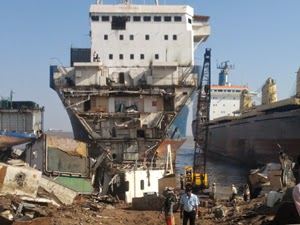 I submit that after each accident and death of workers, inquiry is ordered but their report remains classified and no action has been taken. It is not clear whether these migrant workers are adequately compensated in case of injury and death. Government should reveal how they have dealt with the death of these workers and how their families have been compensated and what steps have been taken to prevent loss of human lives due to inhuman lust of ship breakers and global shipping companies for profit.

I submit that GOI’s letter informs that “Ship breaking yards fall in the category of ‘factories’ covered under Factories Act 1948 which is administered by the Ministry of Labour/State Governments.  Therefore, ship-breaking yards being factories are not within the legal and administrative control of the Ministry of Steel.  Alang –Sosiya Shipbreaking yard  is under the control of Government of Gujarat. If the State Government considers it expedient, it can order inquiry by competent person  as per Section 90 of the Factories Act, 1948. Powers to order the judicial inquiry vests with the State Government.”

In view of the recent deaths and injury and ongoing deaths and accidents since 1984, I seek your immediate intervention to ensure a judicial inquiry into the matter. It has been officially admitted by the Office of the Director Industrial Safety & Health, Government of Gujarat that fatal accidents has been going on since 1984 without any legal remedy.

I submit that information on No. of deaths related to ship breaking activity at Alang-Sosiya Ship Breaking Yard, No. of prosecutions, status of prosecutions and no. of plots closed due to violation of the Factories Act since 1983 to 2013 provided by the Office of the Director Industrial Safety & Health, Government of Gujarat (No./DISH / E-Complaint /2014/ 219) reveals that such accidents have been going on since 1984 without any legal remedy. The information is as under:

I submit that “Fire Incident at Alang Ship Breaking Yard” reported by Director Industrial Safety and Health, Government of Gujarat available at http://www.dish.gujarat.gov.in/Portal/News/71_2_Alang-Accident.pdf and the deaths on June 28, 2014 underline that the accident and death on Alang beach is a regular phenomenon.

I submit that it is quite outrageous that Gujarat Maritime Board (Conditions and Procedures for Granting Permission for Utilising Ship Recycling Plots) Regulation, 2006 [referred to as "Ship Recycling Regulations, 2006] has not been revised in the light of Hon'ble Supreme Court's order and the recommendations of Hon'ble Court's Inter-Ministerial Committee and Hon'ble Court's Committee. This is required for compliance with the directions of the Hon’ble Court in writ petition no. 657 of year 1995, in which I was an applicant.

; coopted members of other organizations; discussed various issues pertaining to ship breaking industries and issued a large number of directions in line with the Hon’ble Court’s orders. It is noteworthy that GPCB and GMB and other concerned agencies have failed to comply with the directions of the IMC.

I submit that the dismantling of end-of-life ships from ship owning developed is underway in violation of the Hon'ble Court's order which had directed that no foreign end-of-life ship can Indian waters without prior decontamination by the country of export. The end-of-life ships have scrap steel, mechanical parts and other valuable equipment that are recycled or refurbished for use in other industries. These ships contain an array of hazardous materials, such as asbestos, polychlorinated biphenyls (PCBs) and waste oils, which, according to the Basel Convention, can have serious implications for the environment and human life in general and migrant workers in particular.  It is turning Bhavnagar into a landfill city of the world because landfill after landfill is getting filled with foreign hazardous waste.

I wish to submit that as per the Minutes of the 17th meeting of the Inter-Ministerial Committee (IMC) on Ship breaking held on June 24, 2014 under Chairmanship of Shri Vinod Kumar Thakral, Additional Secretary and Financial Adviser, Ministry of Steel & Chairman, IMC on Ship Breaking reveals that it dwelt on the issue of "Safety of workers." In the minutes it is recorded that “The representative of GMB stated that DISH has uploaded the report of the accident in their website. For ensuring the safety of shipbreaking workers at Alang GMB has identified a list of common hazards that are likely to cause work related injuries, ill health disease and deaths among the labours. The list has been circulated amongst DISH, DGFASLI, SRIA and GPCB. In this case, DISH will provide Standard Operating Procedure (SOP) to prevent accidents. However the SOP is still awaited from the DISH. Representative of D.G. Shipping suggested total quality management systems for safety of workers could be adopted and periodical safety audit will ensure strict compliance of the same.

It was decided that DISH will make available the SOP to GMB within one month’s time. GMB will issue necessary instructions for implementation of SOP in shipbreaking activities and conduct periodical third party audit of shipbreaking yards for ensuring compliance.” Similar stances of sincerity were expressed on earlier occasions since 1984 but to no avail.

I wish to submit that the Minutes of the 16th meeting of the Inter-Ministerial Committee (IMC) on Ship breaking held on 1-10-2013 at Gandhinagar, Gujarat convened by Chairman, IMC on Ship Breaking reveals that it also dwelt on the issue of "Safety of workers." The minutes states that “The IMC was informed that the accident at Plot No. 82, killing 7 persons occurred due to presence of oil and its vapour in the pipeline of the ship, while cutting the oil pipe flanged with LPG gas cutting equipment. DISH has revoked the competency certificate of the person who issued the certificate. The office of the Deputy Director Industrial Safety and Health, Alang has issued prohibitory order under Section 40 (2) of the Factories Act to prohibit ship breaking till oil in the pipe line is completely cleaned and a fresh the certificate is obtained from the competent person. The factory owner has complied with the conditions of the prohibitory order and therefore the prohibition was lifted by the Director, Industrial Safety and Health on 23.11.2012. Prosecution for the violation of Rule 68-H (13) (a) of Gujarat Factories Rules, 1963 (as amended in 1995) made under the Factories Act regarding allowing hot work on pipeline carrying oil and its vapour while ship breaking by the occupier is filed in the court of law against the occupier. Details of the PF related benefits paid to families of the deceased employees were also placed before the IMC need to be examined from adequacy angle. Chairman, IMC enquired whether criminal prosecution was launched against people who were responsible for loss of life in this accident. GMB may provide details in the next meeting. DISH was asked to place the report of action taken in respect of the accident on the website of GMB and prepare Standard Operating Procedures (SOP) for preventing such incident in future." In recent times such concerns have been raised at least since 2004 when IMC convened its first meeting.

I submit that as per Hon'ble Supreme Court judgment dated September 6, 2007 in Writ Petition (Civil) no. 657 of 1995, District Collector, Bhavnagar has to ensure that dismantling takes place as per a dismantling in keeping with its directions. Sources have revealed that in disregard to Court's order so far the District Collector has chosen not to be associated with the dismantling process. Such non-compliance is unpardonable but appears routine.

I submit that monitoring agencies like Gujarat Maritime Board, Gujarat Pollution Control Board, Department of Industry and Department of Labour ought to be made accountable with exemplary compensation to set matters right.

In the context of these deaths there is a need to ensure that no deaths happen in future by re-opening the old cases of occupational deaths on the Alang beach to set matters right. Those plots which are more accident prone than mines must be closed with immediate effect. The migrant workers deserve both medical and legal remedy besides just compensation.

I submit that it has not come to light as to what has Government done to ensure justice to the workers and what steps have been initiated to ensure that such accidents and deaths do not happen in future. These migrant casual workers live and work in a slave like condition.

I submit that the ongoing deaths of migrant workers from Uttar Pradesh, Bihar, Jharkhand and Odisha on Alang beach, Bhavnagar, Gujarat keep coming to light but nothing has been done to arrest these preventable deaths. This is part of a pattern since 1984 that is crying for your attention because Alang has become the graveyard of workers and toxic ships by externalizing human and environmental cost.

I submit that in its last order dated July 30, 2012, Supreme Court directed, "the concerned authorities shall strictly comply with the norms laid down in the (UN) Basel Convention (on the Control of Transboundary Movements of Hazardous Wastes and their Disposal) or any other subsequent provisions that may be adopted by the Central Government in aid of a clean and pollution-free maritime environment, before permitting entry of any vessel suspected to be carrying toxic and hazardous material into Indian territorial waters.”

I submit that these repeated accidents since the order of the Hon’ble Court illustrate that Court's order has not been violated with impunity.

It germane to submit that most of the end-of-life ships are entering Indians waters on fake documents and false declarations. This creates a compelling logic to get the papers of the end-of-life ships examined by the judicial commission to unearth the nexus between officials, the ship owners, cash buyers and ship breakers of dubious credentials to protect our maritime and security interest.

I submit that the fate of Alang coast which is the worst coastal beach in the world merits your attention.

In view of the above, I seek your urgent intervention to constitute a commission for judicial inquiry to examine why Alang beach has turned into the graveyard of migrant workers and one of the most environmentally destructive, dangerous and degrading places in the world to recommend measures to ensure environmental and occupational health justice to the migrants workers and to save the life and health of migrant workers and local communities from the hazardous industrial activities on the beach.