Indian agriculture is faced with a terrible crisis of sustainability and economic viability, the severity of which can be gauged from the spate of farm suicides over the years. In the past 17 years, close to 3 lakh farmers reeling under mounting pressure have taken their lives. Another 42 per cent would quit agriculture if given a choice.  These are stark signs of the grim crisis.
Even as the country was in the midst of elections, there was a spurt in farm suicides. In the past few weeks, on average, five farmers ended their lives in Vidarbha every day, another five in Telangana, and three in Bundelkhand. In Marathawada in Maharashtra, news reports say 101 farmers have taken their own lives in March-April. In progressive Punjab, 14 farmers have ended their lives in the past two months.
When Prime Minister Narendra Modi blames the UPA for the plight of the jawan and kisan during the past 10 years, he raises a lot of hope for the beleaguered farming community. During election campaigning, he had specifically talked of farmer suicides, farm prices, crisis in agricultural marketing and also touched upon local agricultural issues in different parts of the country. After all, even farmers should get a taste of the promised ‘good times’ - kisano ke bhi to aache din aane chahiye!
What should therefore be the agriculture agenda for the new government? What strategies and approaches should the Narendra Modi government adopt to pull farmers out of the deep morass? Knowing very well that India cannot compromise on food self-sufficiency, there has to be a number of short-term as well as long-term measures. I am being asked this question time and again. In response, here is my 11-point agenda:
1) Providing a guaranteed assured monthly income to farmers
According to the Arjun Sengupta Committee report, the average monthly income of a farm family is Rs 2,115. This includes Rs 900 from non-farm activities. About 60 per cent of farmers are dependent on MNREGA activities for survival, and an estimated 55 per cent farmers go to bed hungry. But these farmers produce economic wealth for the country in the form of agricultural, horticultural and dairy produce. It is high time they are adequately compensated for generating that massive economic wealth in the form of food.
My suggestion is that the new government should set up a National Farmers Income Commission which should have the mandate to compute the monthly income of a farm family depending upon its production and the geographical location of the farm.
2) The time for price policy is now over
Every time the Minimum Support Price (MSP) is raised, questions are asked about its impact on food inflation. Moreover, the Bali Ministerial of WTO has questioned India's subsidies to farmers by way of the MSP. It is therefore an appropriate time to move from Price policy to Income policy.
The income that a farmer earns should be de-linked from the price that his crops fetch in the market. That is why I have been asking for a guaranteed monthly income for farmers. Let us not forget, if inflation is rising, it is also rising for the farmers. While government employees get DA installments every six months to compensate for inflation, not to forget the pay-commission revisions every few years, farmers get only the MSP and that too is un-remunerative.
In an interesting study from Kerala, it was computed that if paddy price rise was to match the salary rise of government officials, paddy prices in 2005 would have been Rs 2669/quintal. It's Rs 1,310 today. In other words what paddy farmers are getting in 2014 as paddy price is 50 per cent of what they should have earned 9 years ago.
The burden of providing cheap food, therefore, to 1.25 billion people should not be on the shoulders of farmers alone. Society too must share the burden. Isn’t it tragic that while a chaprasi earns Rs 15,000 per month, the annadata of the country hovers on the poverty line?
3) Build a strong network of mandis
There is an immediate need to strengthen the network of mandis across the country which provides farmers with a platform to sell their produce. Leaving it to markets will result in distress sale.
To illustrate, let me take the example of rice farmers in Punjab and Bihar. In Punjab, which has a huge network of mandis linked with roads, farmers bring the produce to these mandis. Last harvest, Punjab farmers got an MSP of Rs 1,310 per quintal for paddy. In Bihar, where the APMC Act does not operate, farmers resorted to distress sale with prices not exceeding Rs 900 per quintal. The Commission for Costs and Prices (CACP) is now putting pressure on the Punjab Government to dismantle the mandis and let markets operate. Which means Punjab farmers will soon go the Bihar way. 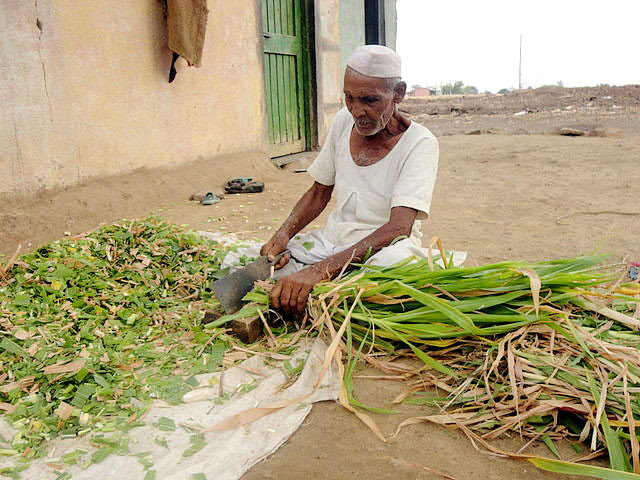 An Indian farmer prepares food for fodder. Credit: Azhar Feder via Wikimedia
4) Marketing fruits and vegetables
For a country which was able to build up an excellent marketing network for one of the most perishable commodities -- milk -- I see no reason why a similar approach cannot be adopted in providing a viable marketing network for fruits and vegetables.
If the National Dairy Development Programme could ensure that milk is procured from each and every village, and then finally delivered to the consumers in the cities through a cooperative chain, I see no reason why India cannot carve out a similar marketing chain for fruits, vegetables and other farm commodities. This has to be accompanied by a skill development programme, imparting improved technology and practices for the young farmers as well as women.
5) Co-operative farming
Co-operative farming needs to be encouraged. Appropriate laws must be framed to make cooperatives more independent and effective. Drawing from the experience of the Amul co-operative in dairy farming, a similar system needs to be adopted for vegetables/fruit farming. I know of small co-operatives of organic farmers which have done wonders. Why can't it be replicated for the rest of the crops?
6) Promoting self-sufficiency
Aim at making villages self-reliant in agriculture and food security. Feeding the population has to be linked with farming.
Chhatisgarh has held up an excellent model of self-reliance in agriculture and food security. It has shifted the focus to local production, local procurement and local distribution. This is exactly what needs to be done throughout the country, for which the National Food Security Act needs an amendment.
Instead of providing 5 kg of wheat/rice/millets every month, the focus should be on making the villages take care of their own food security needs. This will help reduce the huge subsidy bill on food security that is required every year and thereby reduce the fiscal deficit. Such a programme will also help in removing hunger in the long term.
7) Rethink the Green Revolution
The Green Revolution areas of the country are facing a crisis of sustainability. With soil fertility devastated, water table plummeting and the environment contaminated with chemical pesticides and fertilisers, the resulting impact on the entire food chain and human health is being increasingly felt. The new Government should launch a nation-wide campaign to shift farming to non-pesticides management techniques.

In Andhra Pradesh, no chemical pesticides are used in 35 lakh acres. Farmers have even stopped using chemical fertilisers in some 20 lakh hectares. Production has gone up, pesticides pollution has come down, and insect attacks have also come down; more importantly, farm incomes have gone up by 45 per cent because of reduced health expenses. There have been no farm suicides in these areas. The same system now needs to be extrapolated to the entire country with local modifications/adaptation.
8) Integration
Agriculture, dairy and forestry should be integrated. Agricultural growth should not only be measured in terms of an increase in foodgrain production but should be seen in the context of the village eco-system as a whole. This will also shift the focus to low external input sustainable agriculture (LEISA) practices. At the same time such an approach will limit the ecological footprint.
9) Restrict imports
Importing food is importing unemployment. Recently, apple growers in Himachal Pradesh have been protesting against the low import tariffs for imported apples as a result of which the local produce goes a-begging. There are no buyers for Himachal apples, and the prices have plummeted .
Many other crops, too, face a similar crisis. The government must raise import duties on agriculture, horticulture and dairy products and refuse to buckle under the pressure being exerted through the Free Trade Agreements. It should not accept the European Union's demand for opening up for dairy products and fruits/vegetables by reducing the import duties.
Studies have now shown that indiscriminate signing of FTAs and bilateral agreements has been disadvantageous to the country. It is time to revisit the trade treaties and protect domestic agriculture, and thereby millions of livelihoods.
10) Greening the green further
Climate change is certainly going to affect agriculture. But instead of looking at strategies only aimed at lessening the impact on agriculture and making farmers cope with changing weather patterns, the focus should also be on limiting greenhouse gas emissions from agriculture. Considering that the share of agriculture in greenhouse gas emissions is about 25 per cent, the thrust must shift to reducing the application of chemical fertilisers/pesticides in farming.
Following the AP model of non-pesticides management, the cropping pattern too needs a revision. In many dry land regions of the country, for instance, hybrid crops which require almost twice the amount of water as normal crop varieties, are grown. Common sense tells us that in rain-fed regions, which occupy 65 per cent of the cultivable area, crops requiring less water should be grown. But it is just the opposite in reality, accentuating the water crisis at times of rainfall delay.

I see no reason why Rajasthan, a semi-arid region, should be cultivating water guzzling sugarcane, cotton and rice crops. Similarly, I see no reason why Bundelkhand should be cultivating mentha crops, which require 1.25 lakh litres of water to produce enough for just 1 kg of mentha oil. Why can't the cropping pattern in Rajasthan and Madhya Pradesh shift to pulses, oilseeds (like mustard) and millets? Why can't the government provide special incentives by way of a higher price for these crops, so that farmers can willingly shift to more sustainable cropping patterns?
11) Upgrade storage facilities
Lack of storage for foodgrains is appalling. It was in 1979 that under the Save Food Campaign, the government had promised to set up grain silos at 50 places in the country. This should be the top agenda for the new government. Not even a single grain should be allowed to go to waste.

Devinder Sharma
Devinder Sharma is a food and trade policy analyst and chairs the New Delhi-based Forum for Biotechnology & Food Security. His blog, "Ground Reality" can be read at devinder-sharma.blogspot.com