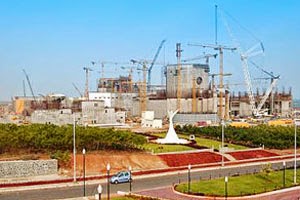 Note: The construction of Tamil Nadu's Kudankulam Nuclear Power Plant (KKNPP) remains engulfed in fear of nuclear accident since its inception. Kudankulam is a town in the Tirunelveli district in Tamil Nadu, India. It is situated 24 km north-east of Kanyakumari, 36 km from Nagercoil and about 106 km from Thiruvananthapuram, Kerala and around 650 km from Chennai. The accident of May 14, 2014 in which 6 workers were injured vindicates the position of the People’s Movement Against Nuclear Energy (PMANE) that had embarked upon an indefinite hunger strike from January 31, 2014 after 900 days of struggle with five specific demands:
[1] Abandon the KKNPP 3 & 4 projects all together.
[2] Order an independent and impartial scientific inquiry into the KKNPP 1 & 2 projects that are steeped in serious problems, corruption allegations and are said to have been built with shoddy equipment and parts. If and when our accusations are proved to be right, shut down the plants permanently.
[3] Share the Site Evaluation Report, Safety Analysis Report, Emergency Preparedness Report, VVER Reactors Performance Report etc. with the local people as per the orders of the Central Information Commissioner, New Delhi.
[4] Share the full and complete details about the liability arrangements that have been made for the fisherfolks’ and the farmers’ loss of livelihood, and security issues.
[5] Withdraw all the 360 false cases that have been foisted on 227,000 men and women.

The fact is that nuclear energy itself is deeply crisis ridden because:
According to a KKNP official, the injured workers have been admitted to the Nuclear Power Corporation of India Ltd (NPCIL) hospital in Koodankulam town.

G. Sundarrajan, who had moved the Supreme Court against the commissioning of the plant, said: "Today's accident at the KNPP is an indication of the status of the project. The parts are third-rate and it is a warning message for the people of Tamil Nadu." The NPCIL is setting up two 1,000 MW atomic power plants with Russian technology in Koodankulam. Prime Minister headed Department of Atomic Energy owes an explanation for such unavoidable and unpreventable accidents.
ToxicsWatch Alliance (TWA) has been demanding that scrapping of the nuclear energy  programme and Atomic Energy Act, 1962 in the aftermath of Fukushima disaster. TWA demands a time bound inquiry by an independent mulch-disciplinary committee and moratorium on all nuclear projects till its report is examined.  TWA demands a white paper on nuclear accidents in the country and seeks publication of the inquiries conducted in such accidents.
Gopal Krishna
ToxicsWatch Alliance (TWA)

Accident at Koodankulam Nuclear Reactor
May 14, 2014. 2 p.m.
Less than a week after the Hon'ble Supreme Court of India ruled that it is satisfied with the safety measures put in place in Koodankulam nuclear reactor, an accident -- reportedly in or around the boiler section of the recently commissioned Unit 1 -- has injured at least six people. As is usual with news regarding NPCIL's installations, no confirmed information is available. NPCIL predictably denied the incident, and then began downplaying it, said a PMANE activist. Radiation accidents -- including the ingestion of tritiated water by NPCIL staff in Kaiga, and injuries in Rawatbhatta -- took months and even years to surface.
NEWS ALERT: Accident at Koodankulam Nuclear Reactor; At least 6 people injured
14 May, 2014. 2.00 p.m.

Shopkeepers from Anjugramam, a village about 15 km from Koodankulam nuclear complex, reported seeing at least 6 ambulances rushing by at around 1.15 p.m. today (14 May). Anjugramam lies near a fork in the road, where one fork leads to Kanyakumari town and the other to Nagercoil. Another Idinthakarai resident, Mildred, who was at Myladi (25 km from Koodankulam) reported seeing 3 ambulances rush by at around1.45 p.m. Myladi is en route Nagercoil. Nagercoil and Kanyakumari are two major towns within 30 km of the nuclear plant, with large hospitals. Predictably, the nuclear establishment denied the occurrence of any accident first. Later they admitted to a minor incident and are reported to have said that the injured were taken to the hospital in the NPCIL township, where they were well enough to walk on their own. Sources from inside the plant report that at least three of the injured were contract workers and the other three were NPCIL staff. Reports also suggest that the accident happened in or around the boiler section of Unit 1, which reportedly attained criticality mid-year last year.

After initially flashing news about the incident, the media is now reportedly playing NPCIL's statements denying and downplaying the incident. If NPCIL's past record is anything to go by, truth will be a while in coming. Dr. APJ Abdul Kalam was unavailable for comment.

I sporadically check back on the Nuclear Power debates and have to say, this is a great time to come back at it. Between some new studies, anecdotal evidence and news streams (a personal favourite here http://www.pressreader.com/profile/Spotlight/bookmarks/nuclear_power), the turn in opinion is remarkable. I agree in that we should take all given with a touch of skepticism, but from 4-5 years ago, the attitude has definitely shifted to the less optimistic, I believe. Though I bet Japan is missing their nukes right about now as peak energy demand leaves many in want of cheap, reliable power.