Who all are colluding to overprice the gas?

April 19, 2014: In a classic case of commencing a strategic lawsuit against public participation (SLAPP), legal notice has been served on the authors, publisher and distributor of the book "Gas Wars: Crony Capitalism and the Ambanis" by Reliance Industries Limited (RIL) and Mukesh D Ambani, the Chairman and Managing Director of RIL. This exercise is an assault on democratic rights. SLAPP is a lawsuit that is intended to censor, intimidate, and silence critics by burdening them with the cost of a legal defense until they abandon their criticism or opposition. This book which captures a historic moment of Indian economy has been authored by Paranjoy Guha Thakurta with co-authors.

The following excerpts from the 588 page book in question have been quoted in the legal notice:
·       …Sections within the government of India, including the Office of the Comptroller and Auditor General (CAG) of India, a Constitutional authority mandated to oversee public finances, have been sharply crtical of the manner in which another wing of the government, the ministry of petroleum and natural gas (MoPNG), designed contracts and tailored rules to favour the country’s largest privately owned corporate conglomerate, Reliance Industries Limited (RIL), headed by India’s richest man Mukesh Ambani.  (Preface page ix)

·       Prime Minister Manmohan Singh has been accused of changing ministerial portfolios at the behest of the same corporate group, an allegation that RIL predictably denies. There have been claims that the group deliberately “squatted” on reserves of natural gas and curtailed production in anticipation of higher prices that are administered by the government, to the detriment of the interests of the country’s people…(Preface page ix)

·       In October 2012, when Sudini Jaipal Reddy was removed from the post of Union minister of petroleum and natural gas and made minister for science and technology, opposition politicians alleged that he had been ‘kicked upstairs’ because he had refused to knowtow to the Ambanis. His ministry had claimed that RIL was ‘deliberately’ reducing gas output and exerting pressure on the government to increase the administered price of gas, charges the company denied. The ministry alleged that the fall in gas production had resulted in an estimated loss of $ 6.3 billion (or over 32, 000 crore at that time) to the country and sought to levy a penalty on the company. In June 2013, another Left MP Gurudas Dasgupta went hammer and tongs at Jaipal Reddy’s successor M. Veerappa Moily for over-ruling his own ministry’s bureaucrats as well as those of other ministries to prepare the ground for a hike in the government administered price of gas, describing the episode as a gigantic scam. Unfazed, later that month, a deeply divided Cabinet Committee on Economic Affairs decided to double the price of gas with effect from April 2014. This raised a hue and cry amid allegations that the government had gone out of its way to favour RIL. (Preface page xi) 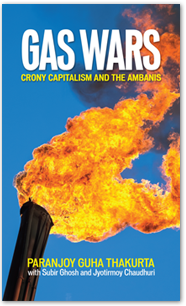 ·       …The CAG report, tabled in Parliament in September 2011, did not quantify the losses to the state exchequer caused by RIL, but its insinuations were clear: the company had reaped huge profits thanks to the acts of commission and omission of a number of influential ministers and bureaucrats. The exchequer had been cheated because the government had failed to act as an impartial custodian of resources that belong to the people of India. (Preface page xi)

The authors of the book ‘GAS WARS’ have responded saying, the book "has been more than fair providing versions of events, circumstances and controversies based on research made from various public documents, opinion of individuals available in the public domain, including media reports etc. The authors, being journalists, are exercising their right to free expression enshrined in Article 19(1)(a) of the Constitution of India."
The core issue that this scholarly and rigorously referenced book seems to be raising is: who all are colluding with RIL to deprive present and future generations of Indians of their claims of the natural resources of the country?
The collusion of political parties came to light in the unopposed re-election of Parimal Nathwani, Group President of Corporate Affairs at RIL to Rajya Sabha. Nathwani is a native of Gujarat, has been re-elected to the Rajya Sabha from Jharkhand. Four AJSU party MLAs and six BJP legislators proposed Nathwani’s name. He was elected to Rajya Sabha for the first time in March, 2008.
Take the case of pricing of the natural gas which has been made an electoral issue by AAP on which BJP, Congress and the regional parties are maintaining a deafening silence.

If gas price is low as per correct production rate then, why should Indians pay higher price of gas? Who wants Indians to pay price of Indian natural resource as per US price rate?
All mining resources belong to the people of India. In the case of oil and gas sector, government enters into contractual relationship with the private player through a Production Sharing Contract that specifies the cost recovery and profit sharing. Government’s Directorate General of Hydrocarbon monitors the execution of the contract. The production sharing contract reads, “By virtue of article 297 of the Constitution of India, Petroleum is a natural state in the territorial waters and the continental shelf of India is vested with the Union of India.” The Supreme Court has ruled, ‘the government owns the gas till it reaches its ultimate consumer and parties must restrict their negotiation within the conditions of the government policy.’
A letter dated January 20, 2014 written by Tapan Ray, Managing Director, Gujarat State Petroleum Corporation Ltd (GSPCL), a Government of Gujarat Undertaking to Vivek Rae, Secretary, Union Ministry of Petroleum and Natural Gas, Government of India has come to light suggesting a formula which will make the cost price of gas reach $14, which is quite higher than what the Indian National Congress led Government at the center has recommended. The letter seeks “approval of Gas price formula for gas to be produced from Deen Dayal West (DDW) Gas Field.”  The letter dated April 02, 2013 reads, “As per bids received during E-auction, the clearing value of the biddable component was discovered as 0 (Zero). The equivalent gas price at V=0 and Brent Cride Oil Price of 110 US $/bbl is 14.20 US $/mmbtu (on GCV basis).” mmbtu stands for million British thermal unit. The letter dated January 20, 2014 reads, “GSPCL requests the Government to accord its approval for the sale of DDW Gas as per the Gas Price Formula proposed in the referred letter dated April 02, 2013.” Tapan Ray’s letter refers to his earlier letters dated April 02, 2013, June 10, 2013 and November 20, 2013 in this regard.
The April 02, 2013 letter states, State Petroleum Corporation Ltd (GSPCL), Jubilant Offshore Drilling Pvt Ltd (JODPL) and GeoGlobal Resources (India) Inc (GGR) signed a Production Sharing Contract (PSC) on February 4, 2003 with Government of India under NELP-III for Block KG-OSN-2001/3 located on East Coast of India. As per PSC signed with Government of India, GSPCL is designated as the Operator to carry out all exploration and development activities in KG-OSN-2001/3 block. GSPCL has achieved significant progress in development of Deen Dayal West (DDW) field in the KG-OSN-2001/3 block.”
This letter states that a process of price discovery through E-auction was carried out for which Expression of Interest was published in The Times of India-All India Edition, Business Standards- All India Edition, Hindustan Times-North India Edition, Business Line-South India Edition) for the price discovery of DDW gas through E-auction.
The letter reveals that “the e-aution was developed by Pandit Deendayal Petroleum University (PDPU) and M/s Guj Info Petro Ltd (GIPL).” The entire process of the E-auction was verified by the Independent Auditor (KPMG).
To get a grasp of what is going on in simple words, let us say one has a oil well at one’s backyard and one hires a contractor to pump the water out of it and there is a broker in between.  The contractor agrees that they will charge 10 paisa on every 100 litres (as it was long term contract so this was the price negotiated). After some years (not even completed 20% of the contract duration, contractor came back and said increase the price, the broker involved said refused to dos so. The contractor bribed the broker and his associates following which the broker agreed to increase the price of the oil. After few years, the contractor again wanted an increase in the price and again broker agreed. After couple of years, the contractor proposed that he wants the price to be made as per the international price of oil. The broker agreed to revise the price.  But being the election season, such dictates of the contractor is embroiled in a deep controversy.