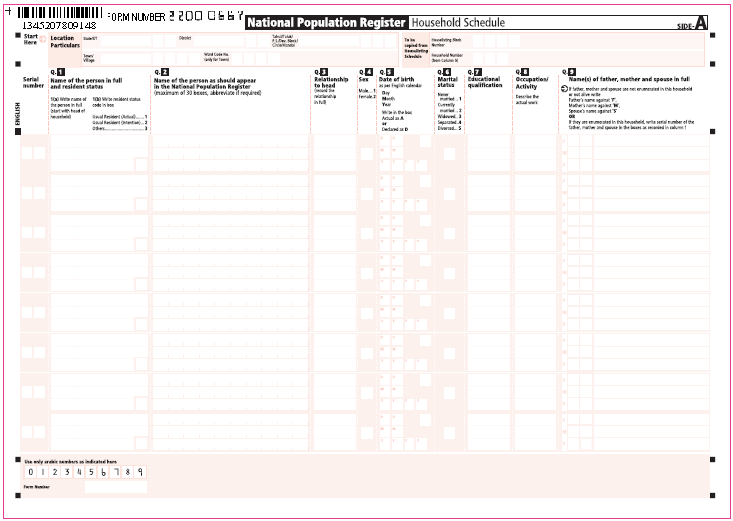 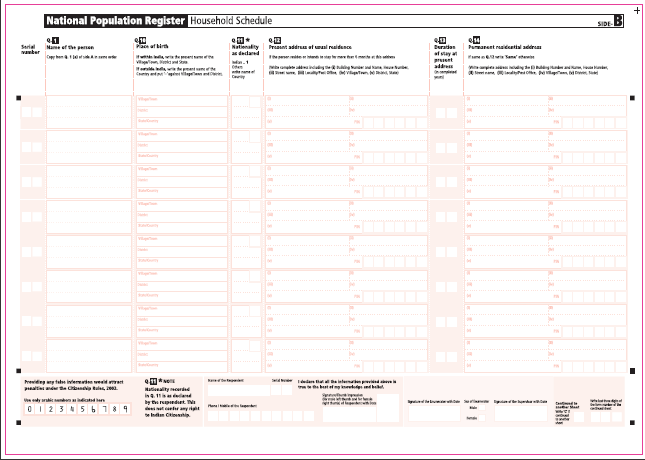 BJP seems to have accepted Aadhaar as irreversible and as a face saving stance, it will have citizens believe that it will not accept the UID number but will gladly do so if it is mentioned as national population register or NPR
In the animal kingdom, the rule is, eat or be eaten; in the human kingdom, define or be defined.

When Yashwant Sinha headed Parliamentary Standing Committee on Finance (PSCF) inconsistently and insincerely recommended handing over of the data collected by Planning Commission’s Unique Identification Authority of India (UIDAI) for biometric number branded as Aadhaar to Home Ministry’s Registrar General of India (RGI) for biometric National Population Register (NPR), it appeared inadvertent and a result of lack of imagination.

Now Sinha’s support for it reveals that it was by a questionable design, which is inconsistent and insincere because the same parliamentary panel had categorically raised question about the absence of legal mandate for biometric data collection. The parliamentary committee’s report observes, “The collection of biometric information and its linkage with personal information of individuals without amendment to the Citizenship Act, 1955 as well as the Citizenship (Registration of Citizens and Issue of National Identity Cards) Rules, 2003, appears to be beyond the scope of subordinate legislation, which needs to be examined in detail by Parliament.”

Notably, the Committee’s report revealed that “Bharatiya - Automated Finger Print Identification System (AFSI), was launched in January 2009, being funded by the Department of Information Technology, Ministry of Communications and Information Technology, for collection of biometric information of the people of the country.” But admittedly the same is not being used by UIDAI because according to the Government, “The quality, nature and manner of collection of biometric data by other biometric projects may not be of the nature that can be used for the purpose of the Aadhaar scheme and hence it may not be possible to use the fingerprints captured under the Bhartiya-AFSI project.” It is bizarre as why the Parliamentary Committee did not question AFSI program of Ministry of Communications and Information Technology headed by A Raja. How can this program be allowed to continue without “amendment to the Citizenship Act, 1955”?

Despite such observation of the Parliamentary Committee that Sinha heads, his support for NPR brings to mind his failure to defend himself during the debate in the Lok Sabha on Black Money, when he faced factual attack on his person and integrity in his role as Union Finance Minister from Manish Tewari. His questionable defence exposed him to the core. Tewari’s name calling exposed Congress as well. The link between black money and three sectors—real estate, the gold-bullion and the Mauritius round tripping of black money route has been underlined. Tewari contended, “Interesting thing about the Mauritius route that there was a Circular called 789, issued on 13 April 2000, by the National Democratic Alliance (NDA) government-led by Bharatiya Janata Party (BJP). It prevented the assessing officers from finding out whether a person was a bona fide resident of Mauritius or not. This exempted anyone who claim to be Mauritius resident from tax.”

Tewari added, “I can give you far more examples to show the manner in which the NDA, during those six years, actually diluted the provisions of the law help, to generate black money.” Responding to it Sinha, the then finance minister said, “The Double Taxation Avoidance Agreement (DTAA) with Mauritius was signed in 1982 when Indira Gandhi was the Prime Minister and foreign direct investment (FDI) and other investments were opened in 1993 when Manmohan Singh was the finance minister. We did nothing except continuing the policy. Sinha added, “Facts can be twisted by ignoring facts and that is what Manish Tewari has done.”

On Hasan Ali issue, Tewari submitted that between 1997 and 2006, money in Ali's bank account rose to $8 billion. “Out of those nine years, who was ruling for six years? The NDA. Was it not its responsibility to find out how money was siphoned off and went abroad?” he questioned. These exchanges of allegations and counter allegations, which is now part of parliamentary record has revealed beyond any reasonable doubt that both BJP-led NDA and Congress-led United Progressive Alliance (UPA) are neck deep in patronising generation of black money.

Now Sinha’s dubious advocacy for NPR exposes him once again. His advocacy of NPR is an exercise in sophistry akin to his defence of his role in issuing circulars that facilitated and nourished black money. Similar stances are being taken in the case of illegitimate and illegal biometric data collection. Sinha and the Parliamentary Committee’s silence on illegality of AFSI program undertaken during A Raja’s tenure appear to be either an act of grave omission or complicity. Sinha’s role in promotion of corporate funding of political parties to the tune of 7.5% of company’s annual profit also merits rigorous attention. The complicit silence of non-NDA and non-UPA parties is quite inexcusable as well.

This Parliamentary Committee had recommended, “The data already collected by the UIDAI may be transferred to the National Population Register (NPR), if the Government so chooses.” The Committee’s report itself recorded, “Registrar General of India was engaged in the creation of the National Population Register (NPR) and issuance of Multi-purpose National Identity Cards to citizens of India, it was decided with the approval of the Prime Minister, to constitute an Empowered Group of Ministers (EGoM) to collate the two schemes – the NPR under the Citizenship Act, 1955 and the UID scheme. The EGoM was also empowered to look into the methodology and specific milestones for early and effective completion of the scheme and take a final view on these. The EGoM was constituted on 4 December, 2006.”

When convergence of biometric NPR and Aadhaar/UID scheme was part of the conceptual design, it had left not even an iota of doubt that both the schemes were in fact one.

Besides the Ministry of Planning in their written reply stated, “UIDAI is adopting a multiple registrar approach and the Registrar General of India (RGI) will be one of the Registrars of the UIDAI. To synergize the two exercises, an Inter-Ministerial Coordination Committee has been set up to minimize duplication. The UIDAI is making all efforts to synergise with National Population Register (NPR) exercise.” This recorded reply illustrates that BJP’s proposal for NPR and Congress’s Aadhaar is simply the same rose with different names.

A seasoned politician and an ex-bureaucrat like Sinha cannot be so naïve as to fail to understand that Aadhaar and NPR are one and the same. This feigned ignorance seems to demonstrate the collusion between BJP and Congress on biometrically profiling Indians.  Admittedly, biometric data is a property. It is not surprising that property dealers of all shapes and shades are visible on the horizon.

Let us revisit the terms of reference of UIDAI. The entire political class and citizenry was taken for a ride regarding a so called turf war between the Ministry of Home Affairs (MHA) and UIDAI, which media was made to understand that got resolved by diving the Indian population in two parts of 60 crore for coverage under Aadhaar and the rest under National Population Register or NPR, which also generates Aadhaar number. The fact is the terms of reference of the UIDAI mandated it "take necessary steps to ensure collation of National Population Register (NPR) with UID (as per approved strategy)", to "identify new partner/user agencies", to "issue necessary instructions to agencies that undertake creation of databases… (to) enable collation and correlation with UID and its partner databases" and UIDAI “shall own and operate the database". The executive notification dated 28 January 2009 that set up UIDAI mentions this. The entire exercise has been staged to hoodwink unsuspecting Indians.

If there was still any doubt about the oneness of NPR and Aadhaar, the report of Press Trust of India of 30 January 2014 revealed the proposal of the Planning Commission to allow UIDAI to start enrolments in areas other than 18 states and Union Territories allocated to it. The Commission's proposal is based on the view that this is required to speed up collection of biometrics details of residents and for issuing them Aadhaar numbers as well as a National Multi-purpose Identity Cards (NMIC) based on NPR. It was reported, "The Commission discussed the proposal with Registrar General of India (RGI) under the Ministry of Home Affairs. They have agreed that UIDAI can be allowed to enroll in some states where they are collecting biometrics details of resident, to speed up enrolments."

In such a situation Sinha’s proposal of replacing biometric Aadhaar with biometric NPR is reminiscent of Danish King Cnut who commanded the crest and trough of tidal wave to obey him and lived in a make believe world thinking that the waves become go up or down in order to obey his command! It indicates that BJP has accepted Aadhaar as irreversible and as a face saving stance it will have citizens believe that it will not accept Aadhaar but will gladly do so if it is mentioned as NPR.

Both NPR and Aadhaar are online databases by design.

James Ball, Julian Borger and Glenn Greenwald reported for the Guardian referring to revelations of earth wide surveillance by Edward Snowden have stated that the leaked files show that the US’ National Security Agency and its UK counterpart Government Communication Headquarters (GCHQ) have broadly compromised the guarantees that Internet companies have given consumers to reassure them that their communications, online banking and medical records would be indecipherable to criminals or governments.

According to media reports, the MHA accused telecom operator Vodafone of secretly sharing subscriber data with a British GHCQ, a charge denied by the company. According to documents of the Internal Security Division of the Home Ministry, Vodafone is alleged to have given the GCHQ, "secret unlimited access to their network of undersea cables, which carry much of world's phone calls and Internet traffic".

"GCHQ's mass tapping operations has been built up over the past five years by attaching intercept probes to the transatlantic cables where they land on British shores," the home ministry documents claimed. "Intercept partners are paid for logistical assistance," it added.

The drive to mastery over men is not merely a by-product of a faulty political economy but also of a world view, which believes in the absolute superiority. It has become more and more apparent that genocides, Eco disasters and ethnocide are but the underside of corrupt sciences and psychopathic technologies wedded to new secular hierarchies, which have reduced major civilisation to the status of a set of empty rituals, observes Ashish Nandy in his book The Intimate Enemy: Loss and Recovery of Self under Colonialism.  The lessons from database based genocides are part of recent world history and should not be forgotten in the face of a large section of complicit and partisan corporate media.

Now that it has been established that surveillance agencies of the US, UK and their allies have dismantled firewalls created for online privacy and encrypted Internet communications, the alliance of political parties who get the electoral verdict post 2014 parliamentary elections must promise in writing in their manifestoes their resolve to dismantle the illegitimate biometric database to undo the damage to done to Indians. The political parties must be made to promise creation of a mandatory decentralised, secure and offline communication structure. The new regime will have to unequivocally reject the proposal of Aadhaar based GST, GST Network and the intricately linked solutions architecture of World Bank Group, NATO, Interpol and WTO.

You may also want to read…

Is Nandan Nilekani acting as an agent of non-state actors? –Part XI

Why Kejriwal govt in Delhi should abandon biometric Aadhaar?—Part XXI

Is our political class trapped by economic hit men from database empires? -Part XXVII
Do political patrons of the UID have their own Aadhaar number? –Part XXVIII
Aadhaar & database risks: Will India evaporate to become nobody in our life time? –Part XXIX

(Gopal Krishna is member of Citizens Forum for Civil Liberties (CFCL), which is campaigning against surveillance technologies since 2010)
Share this article :
Labels: Big Data