skip to main | skip to sidebar
Home » Conflict of Interest » Full disclosure: Regulatory agencies must demand conflict-of-interest statements for the research they use

Full disclosure: Regulatory agencies must demand conflict-of-interest statements for the research they use 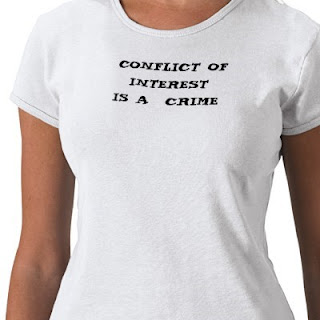 It was the 1976 film All the President’s Men, about the uncovering of the Watergate political scandal by two Washington Post reporters, that popularized the phrase: “Follow the money.” He who pays the piper calls the tune. Science combats the undue influence of commercial interests — or at least tries to — by using a different guideline, illustrated by a popular catchphrase from another film: “Show me the money.” Give us transparency.

The selective promotion of scientific research to steer policy-making is a murkier business altogether — particularly in environmental policy-making, in which the battle for the ear of the piper between big business and the ‘little guy’, who is often affected by pollution or hazardous substances, is so asymmetric. The problem is not limited to climate change, which is only the most high-profile example at present.

It has been more than a decade, for example, since David Michaels, previously a public-health researcher at George Washington University in Washington DC, and Wendy Wagner, an environmental-law specialist, broached the issue in the pages of Science (D. Michaels and W. Wagner Science 302, 2073; 2003). They warned that the evidence base of important regulatory standards is undermined by the limited scrutiny of private research submitted to regulatory bodies, and by the fact that these bodies often do not require disclosure of researchers’ funding sources.

Michaels is now in a position to do something about this. In 2009, he was appointed to lead the Occupational Safety and Health Administration (OSHA), one of the US agencies he criticized in that 2003 piece.

OSHA’s remit is health-and-safety standards, and the test bed for Michaels’ stance is a 40-year effort to regulate exposure to silica dust. Crystalline silica dust is produced by processes such as concrete grinding and sandblasting in construction and other industries. If inhaled, it can cause silicosis — an incurable condition involving inflammation of the lungs — and lung cancer.

As part of a consultation on tougher regulation of silica exposure, OSHA asked that people submitting scientific comments to the agency should declare financial conflicts of interest. According to Michaels, this might be the first time that any federal agency has made such a request.

“There is a broad consensus in favour of transparency about funding sources.”

But even though this is a request and not a requirement, it has not gone down well in all quarters. In particular, a group of powerful US senators has come out against the idea that such a declaration should be part of federal rule-making (see page 18). They suggest that OSHA might “prejudge the substance” of comments on the basis of such disclosures.

Nature — like many journals — has required such disclosures for years, and considers such opposition to be misguided. In controversial areas, these conflict statements pre-empt allegations of secrecy and bias that could distract from the central issues. And past failure to be transparent about such interests has led to scandals involving concealed or distorted evidence and ghostwriting, as has been well documented in areas from tobacco control to drug development.

The medical profession and the pharmaceutical industry, to their credit, have taken major steps towards openness. Some researchers think that conflict-of-interest disclosures should go even further than they currently do, and should detail the contractual arrangements involved, such as whether the funder had a veto on publication. In science more generally, there is a broad consensus in favour of transparency about funding sources.

Transparency is the best defence against the purchase of undue influence by those with the most financial clout. In areas where tough standards are needed to protect public health, and powerful and wealthy interests have a financial incentive to water down these standards, such transparency is more than desirable — it is essential, and history demonstrates that. Rather than challenging OSHA for requesting conflict-of-interest disclosures, US politicians should be asking why all federal agencies do not require them. After all, it is easier to the follow the money, and to make the proper decision, when all details are on full show.
Nature 507, 8 (06 March 2014) doi:10.1038/507008a
http://www.nature.com/news/full-disclosure-1.14817
Photo credit:http://startelegraph.blogspot.in
Share this article :
Labels: Conflict of Interest