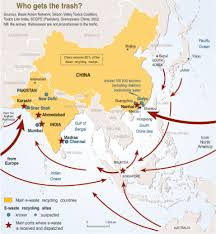 By 2017, all of that year’s end-of-life refrigerators, TVs, mobile phones, computers, monitors, e-toys and other products with a battery or electrical cord worldwide could fill a line of 40-ton trucks end-to-end on a highway straddling three quarters of the Equator.

That startling forecast, based on data compiled by the Solving the E-Waste Problem (StEP) Initiative — a partnership of UN organizations, industry, governments, non-government and science organizations — represents a global jump of 33 percent in just five years.

While most of these used e-products are destined for disposal, gradually improving efforts in some regions are diverting some of it to recycling and reuse.

The escalating global e-waste problem is graphically portrayed in a first-of-its-kind online StEP E-Waste World Map. The map was launched along with a complementary new StEP report characterizing US domestic and transboundary flows of used electronics no longer residing in households.

The interactive map resource, presenting comparable annual data from 184 countries, shows the estimated amount of electrical and electronic equipment (EEE — anything with a battery or a cord) put on the market and how much resulting e-waste is eventually generated (i.e. comes out of use or post-use storage destined for collection by a recycling company or for disposal).

By providing a better sense of anticipated e-waste quantities, the initiative is expected to help governments and companies plan e-waste management.

The map shows, for example, that almost 48.9 million metric tons of used electrical and electronic products were produced last year — an average of 7 kg (43 pounds — comparable to eight red clay bricks) for each of the world’s 7 billion people.

And the flood of e-waste is growing. Based on current trends, StEP experts predict that, by 2017, the total annual volume will be 33 percent higher at 65.4 million tons, the weight equivalent of almost 200 Empire State Buildings or 11 Great Pyramids of Giza.

“Although there is ample information about the negative environmental and health impacts of primitive e-waste recycling methods, the lack of comprehensive data has made it hard to grasp the full magnitude of the problem,” says Ruediger Kuehr of the United Nations University, and Executive Secretary of the StEP Initiative, “We believe that this constantly updated, map-linked database showing e-waste volume by country, together with legal texts, will help lead to better awareness and policy making at the public and private levels.”

The StEP e-waste world map database shows that in 2012 China and the United States topped the world’s totals in market volume of EEE and e-waste. China put the highest volume of EEE on the market in 2012 — 11.1 million tons, followed by the US at 10 million tons.

Those positions were reversed when it came to the total volume of e-waste generated per year. The US had the world’s highest figure of 9.4 million tons and China generated the second highest e-waste total of 7.3 million tons.

However, the world’s two biggest economies were far apart when it came to the amount of annual e-waste per person. The US was highest among major countries (and seventh overall) with each American responsible for an average 29.8 kg of hi-tech trash. That was almost six times higher than China’s per capita figure of 5.4 kg.

Information covering e-waste rules, regulations, policies and guidance is also available via the StEP e-waste map. This is obtained substantially from StEP member Compliance & Risks’ knowledge management platform, C2P, and highlights the huge variety of requirements and lack of consistency in tackling the e-waste issue throughout the world.

Report offers detailed US analysis
A report released in tandem with the map was developed by the Massachusetts Institute of Technology (MIT) Materials Systems Laboratory and the US National Center for Electronics Recycling (NCER), and funded by the US Environmental Protection Agency in support of the US government’s National Strategy for Electronics Stewardship.

The detailed analysis of the United States’ generation, collection and export of some types of used electronics shows that about 258.2 million used, whole unit computers, monitors, TVs and mobile phones were generated in 2010.

The study, Quantitative Characterization of Domestic and Transboundary Flows of Used Electronics, found that mobile phones constitute the biggest component in units — with an estimated 120 million collected — while TVs and computer monitors made up a major proportion of the total weight.

Despite growing interest and concern surrounding transboundary movements of used electronics around the world, there is a dearth of data on their movements. Although a multitude of different data sources exist, coherent sets of information on used electronics leaving households and their movement are lacking because of inherent challenges in obtaining such information. both the StEP e-waste world map and the MIT/NCER study are addressing these points.

These challenges include limited mechanisms for data collection, undifferentiated trade codes, lack of consistent definitions for categorizing and labelling used electronics as well as their components, minimal regulatory oversight, and limited agreement on the definitions of end uses (i.e., reuse vs. recycling and shipments for repair vs. recycling).

Two-thirds of the used units (56 percent of total weight) were collected for reuse or recycling and 8.5 percent of the collected units (3.1 percent of total weight) were exported as whole units. This export figure, based on trade data, likely represents the low end of the range as not all whole units may be shipped using appropriate trade codes. Researchers say disassembled products could have been shipped separately but were not tracked (adding that dissembled products are of less international concern than products likely to be disassembled in developing countries).

The research shows that most larger electronic items, especially TVs and monitors, were exported overland or by sea to destinations such as Mexico, Venezuela, Paraguay and China, while used computers, especially laptops, were more likely to go top Asian countries such as Hong Kong, United Arab Emirates and Lebanon.

The main destinations for mobile phones were Hong Kong and countries in Latin America and the Caribbean such as Paraguay, Guatemala, Panama, Peru and Colombia.

“If it is a stopping point before re-export, the final destination is likely in the same region.”

The report underlines great ongoing challenges in related intelligence gathering worldwide, such as a lack of consistent definitions for categorizing and labelling used electronics and their components, minimal regulatory oversight, and limited agreement on the definitions of end uses (i.e., reuse vs. recycling).  The report offers recommendations including:
Solving the E-waste Problem fosters inclusive solutions-oriented dialogue, cooperation and consensus by providing a global platform for sharing information, knowledge and recommendations founded on expert scientific research and members’ experiences.
The initiative works internationally with receptive external partners to develop fair and objective policies to stimulate and demonstrate practical, measured and effective responses to e-waste prevention, management and processes and leads the e-waste management discussion worldwide by providing a scientific basis from which to inform and actively change the awareness, knowledge, attitudes and behavior of the international business and consumer public.