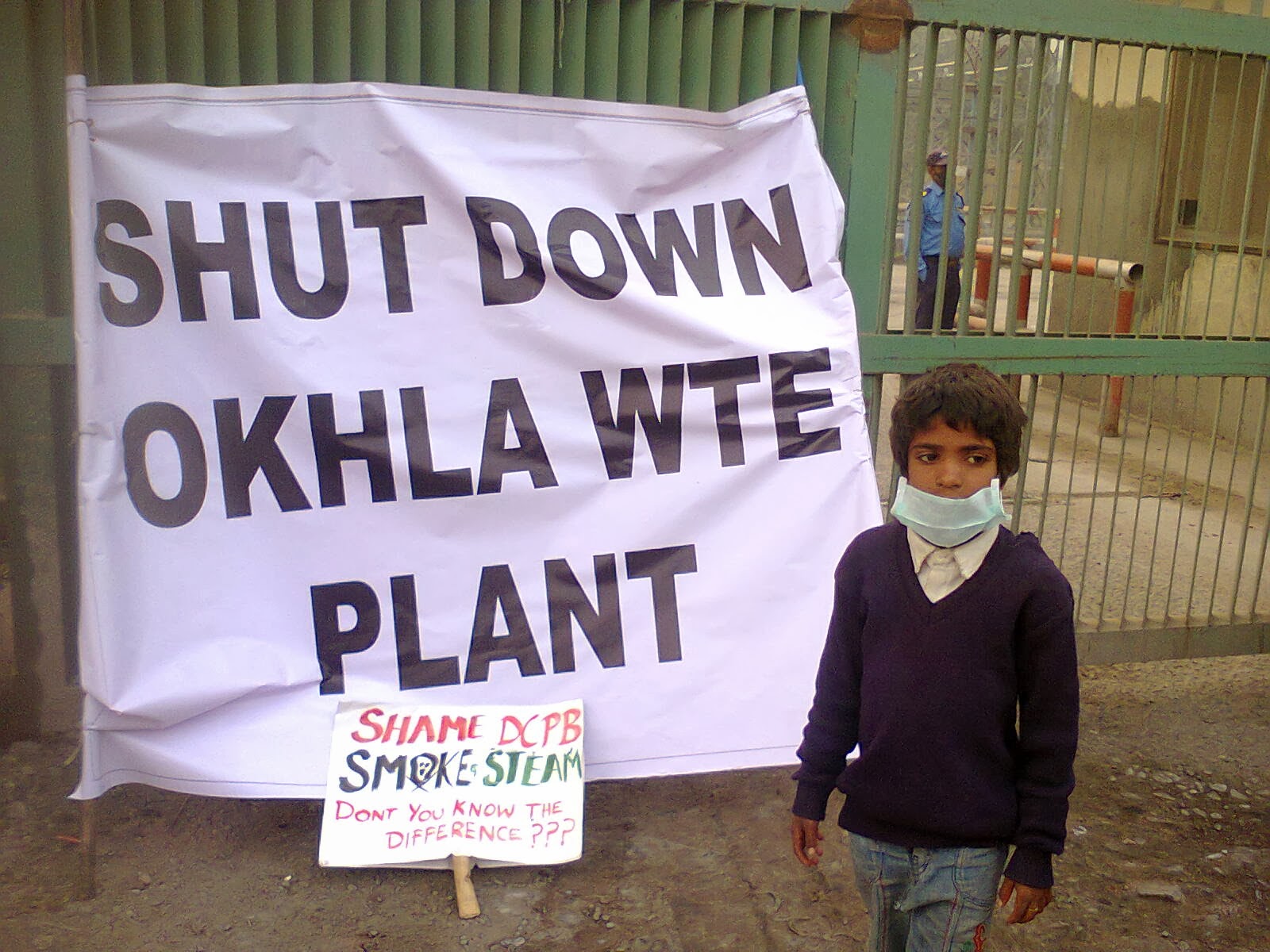 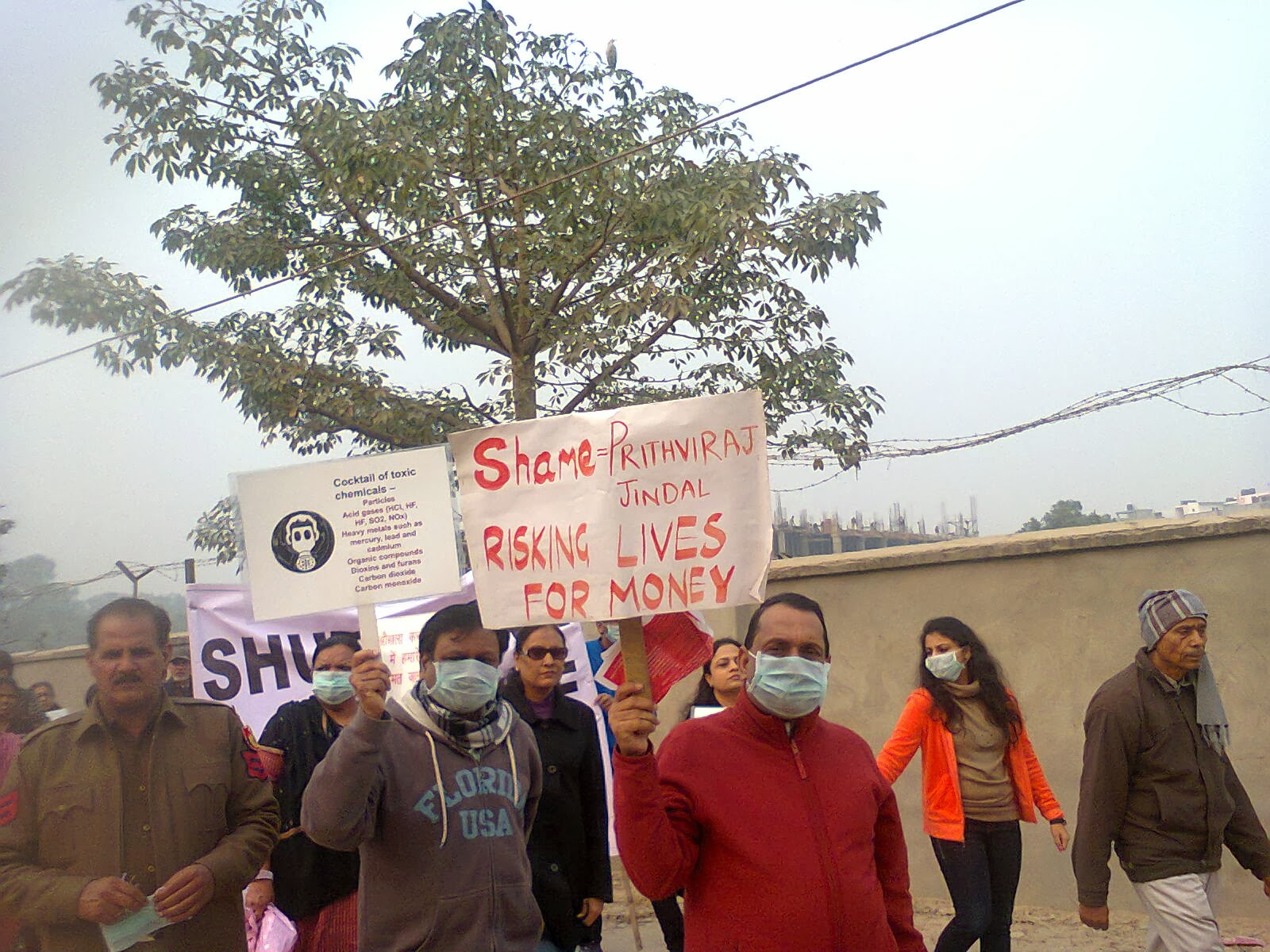 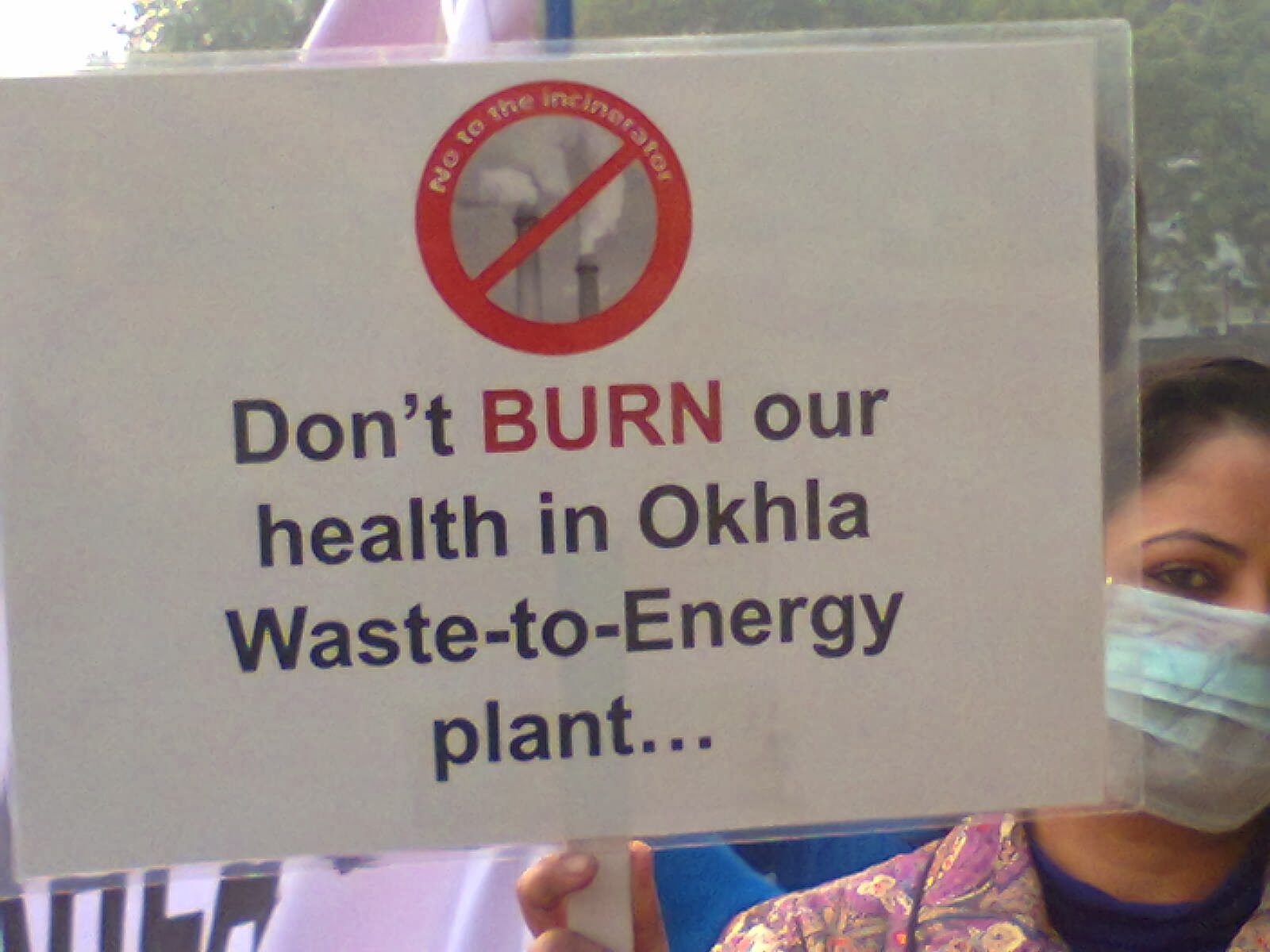 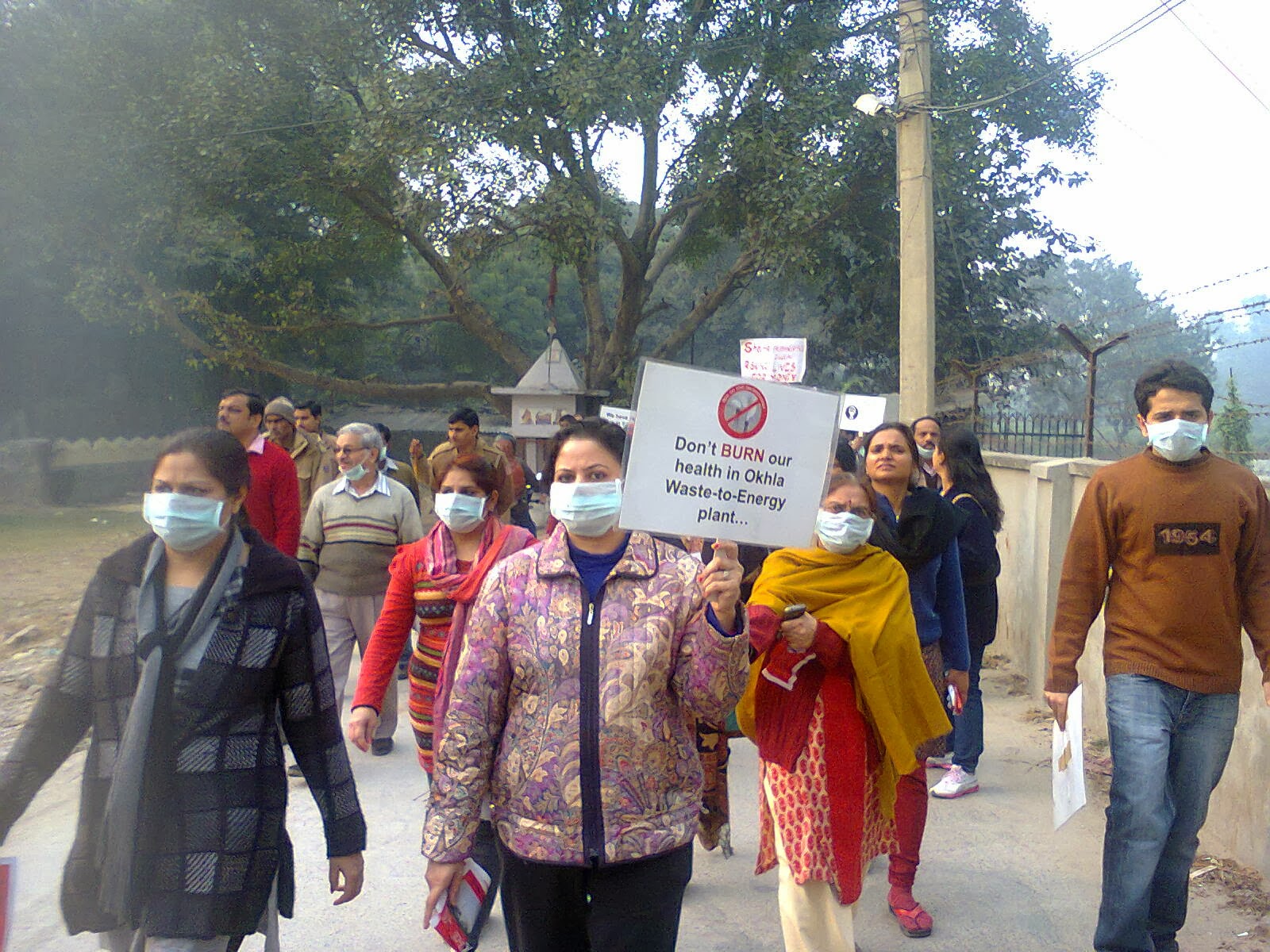 AAP led Government should cancel the consent to establish given to the illegal and illegitimate plant, demands ToxicsWatch Alliance (TWA)

New Delhi, Jan 10, 2014: Alarmed at the public health consequences of the toxic ash fall from Jindal’s Waste Incinerator plant in Okhla today, residents of Okhla visited, residents are to meet Arvind Kejriwal Govt at Delhi Secretariat tomorrow in this regard.

Aam Aadmi Party (AAP) led Government should adopt zero waste philosophy of decentralized waste management instead of carrying on with the legacy of building landfills in the sky. The campaign against the plant has been going on since March 2005. The National Green Tribunal which threatened to close the plant is to hear the matter on January 15, 2014. On January 5, 2014, there was a peoples’ march against the plant in Okhla. The pictures are attached.

Earlier, following the letter of residents dated January 10, 2014 to the Delhi Pollution Control Committee (DPCC) and Central Pollution Control Board, the officials visited the site to take photographs and collect the samples.

Residents recalled election promises made by the ruling Aam Aadmi Party (AAP) to deal with the environmental crisis caused by this municipal waste incinerator based power plant. Dharamvir Singh, the local candidate of AAP during the assembly elections who participated in the people’s protest march said that action would be taken against the plants at the earliest. A delegation of residents, environmental and waste picker groups is likely to meet Delhi Government to apprise him of the emerging situation due to these hazardous commercial and industrial establishments in residential areas which appears to be an act of environmental lawlessness in the heart of the national capital. AAP representatives Dharmavir Singh, Gaurav Katiyar and Kapil Dhondhi are facilitating the same.
Meanwhile, at team of 4 persons from DPCC and CPCB visited the colony to examine the dust fall. They took photographs of a few vehicles and collected samples of dust. Residents apprehended that the “frequency of accidents being very high”, the plant may be closed in public interest.

The plant in question is situated not only in the proximity of New Friends Colony, Maharani Bagh, Sukhdev Vihar and the business district Nehru Place - but also several prominent
institutions, including hospitals like Apollo, Escorts and Holy Family. But disregarding these, as also a number of binding guidelines from multiple state agencies and at least one Supreme Court directive, the plant has come up, under the shade of slack regulation, at one-tenth the cost of a world-class waste-to-energy facility, deploying China-made equipment and inadequately provisioning for toxic by-products of incineration. It is strange that the Delhi government
is backing the project as a technology solution to the city's two enduring, and worsening, problems - excess of waste and shortage of power. But while contributing to the solution of two problems, the plant kindles a number of new ones, with potentially serious health
and environment implications for the residents of Delhi.

Unmindful of such concerns, this controversial plant is using a technology which is absolutely unsafe. The polluting potential of a plant using municipal solid waste as fuel is serious. Emissions include suspended particulate matter (SPM), sulphur oxides (SOx), nitrogen oxides (NOx), hydrogen chloride (HCl), and dioxins and furans, which are among the most toxic substances known to science.

Residents had brought this to the notice of DPCC and CPCB in the morning hours when they noticed dust falling all around the colony just after 10.00 am.  There was excessive smoke from the chimneys of the Jindal’s municipal waste incinerator. All cars of DDA Flats, Sukhdev Vihar covered with dust falling from the emissions of the MSW WtE Plant, Okhla. The dust from the balcony has been collected. It weighs about 18 gms / sq. mtr.

Residents met Sandip Dutt, General Manager of the incinerator plant who explained that there was disturbance in the synchronization of the turbines. In view of the fact one of the boiler of the waste burning based power plant had to be closed. One of the boiler was still closed.

Residents were astounded to notice that the Display Board of the pollution level which is installed at the entrance of the incinerator plant to show the live emission levels was still showing the emission within the prescribed limits despite admitted disturbance in the synchronization of the turbines. It was noted that the company official could not show or clarify as to why the Display Board did not show excessive Particulate Matter level, which was visible with naked eye. This demonstrates that the LED Display Board is an eye wash.

In a detailed letter dated January 6, 2014 to Dr Veerappa Moily, Union Minister of Environment & Forests, ToxicsWatch Alliance (TWA) has drawn his attention towards peoples’ protest against waste to energy based on hazardous unapproved Chinese technology held in Okhla on January 5, 2014 and the letter of Shri Jairam Ramesh as the Union Minister of Environment & Forests to the Chief Minister of National Capital Region of Delhi underlining the violation of environmental regulations in the matter of unapproved and hazardous Chinese technology based waste to energy plant in Okhla, Delhi. The letter of Ramesh was sent following his site visit on March 30, 2011 and meeting with residents on 31st March, 2011.

The plant in question does not have clearance under the Wildlife Act although the plant is situated within 1.7 km of the Okhla Bird Sanctuary, administered by Uttar Pradesh Government. It is not surprising that bird count in the sanctuary is going down at an alarming rate. If immediate steps are not taken the sanctuary might become a ghost sanctuary and Okhla may become a ghost colony.

TWA has demanded an inquiry into the circumstances under which this plant was given clearance based on fake public hearing and misleading facts presented in the plant’s Environment Impact Assessment (EIA) report. The clearance was for RDF technology but the plant is operating admittedly based on an experimental technology turning residents and birds of Okhla into guinea pigs. This came to light in a 31 page report submitted by a committee headed by Central Pollution Control Board on orders from Shri Ramesh. The deafening silence on the 31 page report of the Technical Experts Evaluation Committee of Central Pollution Control Board (CPCB) on the Timarpur-Okhla Waste to Energy Incinerator Plant constituted by Union Environment & Forests Minister condemned the Timarpur-Okhla Waste to Energy Incinerator Plant by JITF Urban Infrastructure Limited (Jindal Ecopolis) which has violated every rule in the rule book including environmental clearance conditions is intriguing. It revealed to the Experts Committee in September 2011 that it is using untested and unapproved Chinese incinerator technology in complete violation all laws and environmental clearance of 2007 including its own project design document and environment impact assessment report. Chinese technology provider is from Hangzhou New Century Company Ltd of Hangzhou Boiler Group. Its findings merit attention.

The power plant in question has been set up by M/s Jindal Urban Infrastructure Limited (JUIL), a company of M/s Jindal Saw Group Limited owned by Prithviraj Jindal. This plant is facing bitter opposition from residents, environmental groups and waste pickers. It is facing a case from Sukhdev Vihar Residents Welfare Association in the National Green Tribunal (NGT). The next date of hearing is on January 15, 2014. Earlier, the Delhi High Court listed this very case 28 times till January 2013. Even in NGT one year has passed without any relief to the residents of Okhla. Even Uttar Pradesh Government has joined the case objecting to the controversial
plant.

This grave situation has emerged due to evidently flawed waste to energy policy of Union Ministry of New & Renewable Energy (MNRE) which is providing fiscal incentives to hazardous incinerator and co-incineration incineration technologies like Refuse Derived Fuel (RDF). The MNRE must be persuaded to give this aspect of the policy to save irreparable damage to sustainable and sane municipal solid waste management practices. The Ministry of Power can vouch for the fact that the energy from municipal is inconsequential compared to the colossal public health and environmental concerns.

It is clear from Environmental Ministry's White Paper and the Technical Report prepared with assistance from Ministry of Science and Technology that MCD's “waste load” and its mishandling by the aforementioned contractors will distort the municipal solid waste management beyond repair. Indian National Congress led Government and BJP led municipal corporation in question has been insensitive towards the plight of the residents, the new Government in Delhi can take a pro-environment and pro-public health decision to save the residents of Delhi in general and Okhla in particular from the ongoing poisoning of their food chain. Even residents of Okhla bird sanctuary which is under the control of Government of UP will be benefited. This issue is a litmus test for the new Government. It should cancel the consent to establish given to the illegal and illegitimate plant.