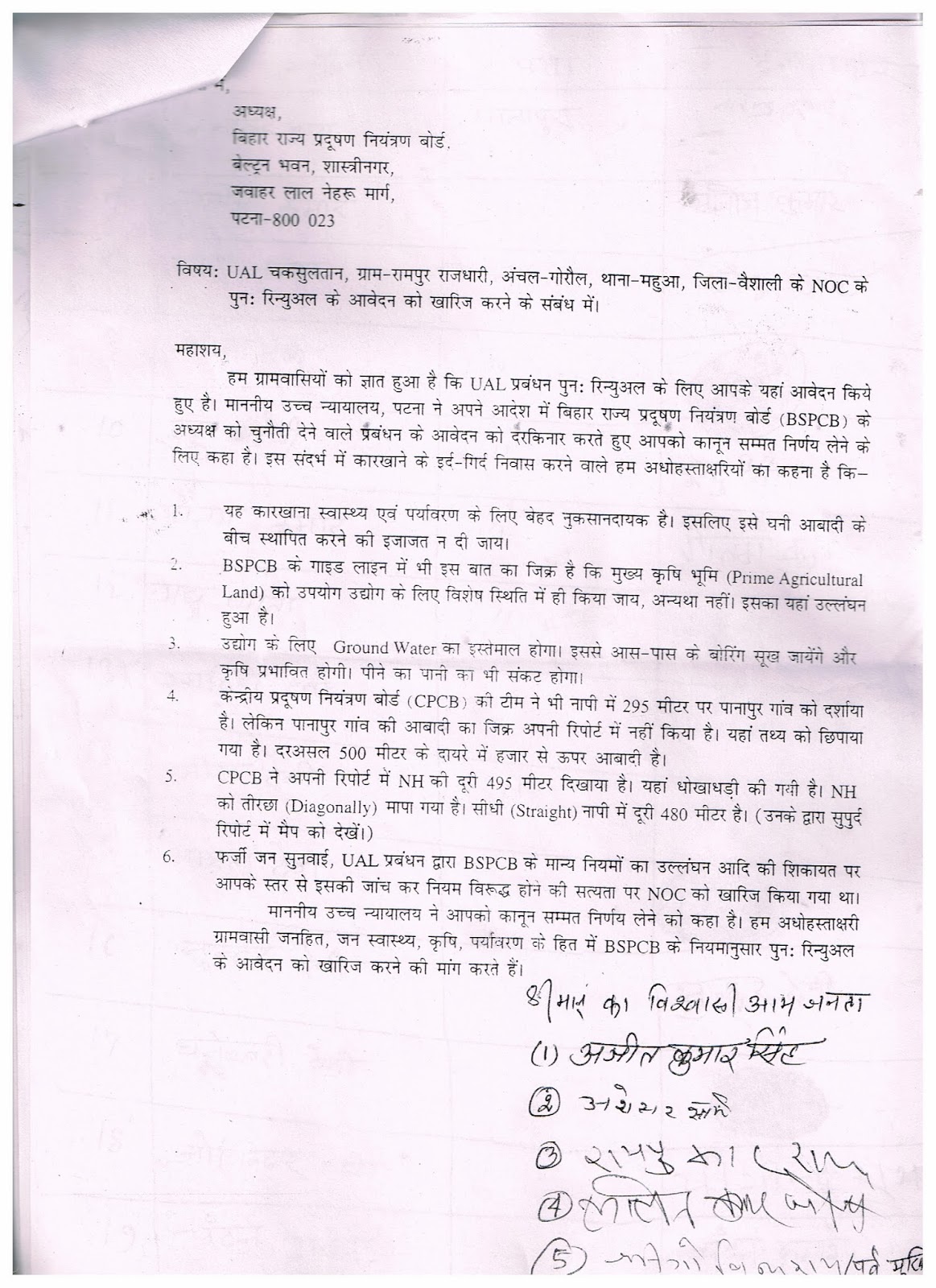 Notably, the central government has technically banned mining of asbestos and trade in asbestos waste (dust & fibers). By the letter from Union Ministry of Steel, Mines & Coal, Government of India with reference no. 7/23/84-AM-III/AM-VI dated 09.07.1986, there is a stay on grant of new mining lease for asbestos mineral and renewal of the leases. As a result at present no permission is being given for new mining lease of asbestos mineral and no lease is being renewed. At present no lease of asbestos mineral is approved/or in force. The Hazardous Waste (Management, Handling and Transboundary Movement) Rules, 2010 has retained the ban on import/export of waste asbestos (dust & fibers).

The Supreme Court orders of 1995 and 2011 categorically refer to studies that have established proven relation between asbestos exposure and incurable lung cancer.

Even World Bank and Asian Development Bank documents underline the carcinogenic risks of asbestos fibers besides WHO and ILO.

Bihari migrant workers who are involved in the shipbreaking industrial activity on Alang beach, Bhavnagar, Gujarat are routinely exposed to asbestos fibers. Alang is a graveyard for ships and workers.

State Government can express its sensitivity towards migrant workers who work in hazardous industries in other States by creating a database of such workers so that when they are found to be suffering from occupational diseases, the Government can demand from the concerned companies and the relevant States.

In violation of BSPCB's Guidelines for siting of industries, the Experts Appraisal Committee, Union Ministry of Environment & Forests granted environmental clearance to Utkal Asbestos Limited (UAL) for its construction of asbestos based factory at Chaksultan, Rampur, Rajdhari near Panapur in Kanhauli Dhanraj Panchayat, Goraul, Mahuwa, Vaishali due to fraudulent misrepresentation by the company and the complicity of the local officials.

TWA demands that since public health is a State subject under the Constitution. Bihar Government can teach is a lesson to the Union Ministry of Environment & Forests which pretends ignorance about its own Vision Statement on Environment and Health on its website and continues to grant environmental clearance to such hazardous asbestos
based factories which are banned in over 50 countries. The Vision Statement reads: "Alternatives to asbestos may be used to the extent possible and use of asbestos may be phased out." The central ministry’s document says so at page no. 12. It is
available at http://moef.nic.in/divisions/cpoll/envhealth/visenvhealth.pdf

Earlier, Nitish Kumar, Chief Minister, Bihar promised that he would puncture all hazardous asbestos based factories which were approved when Sushil Modi was the environment minister and which were allowed due to compulsions of coalition although he did not favour it in the cabinet.

Concerned authorities in Bihar should note that Union Ministry of Labour has revealed that that the “Government of India is considering the ban on use of chrysotile asbestos in India to
protect the workers and the general population against primary and secondary exposure to Chrysotile form of Asbestos" at page no. 28 of its concept paper at the two-day 5th India-EU Joint Seminar on “Occupational Safety and Health” during 19-20 September, 2011.

Meanwhile, the anti-asbestos struggle is continuing in Bihar despite fake cases being pursued by the asbestos company in question.

It is noteworthy that according to the notification of Bihar State Pollution Control Board (BSPCB), the battery limit of the industrial site must be at a distance from human habitation, railway line, river, national or state highway. It is also submitted that as per the
guideline of BSPCB contains the list of major polluting industries like Asbestos and asbestos-based industries are in the RED Category. Battery limit of categories of hazardous industries like Asbestos and asbestos-based industries the battery limit of this industry is 500 metres minimum from the national/ state highways, railway line, river and habitation.

The asbestos based plant in Vaishali and Bhojpur is within 200-300 metres battery limit from national/state highway, railway line, river and human habitation.

ToxicsWatch Alliance (TWA) seeks creation a database of the workers who handle
asbestos so that Government of Bihar can pursue the case of legal and medical remedy for these workers who are bound to suffer from asbestos related incurable diseases.

It must be noted that Bihar Government is yet to comply with the Supreme Court's order of January 27, 1995 and January 21, 2011. Its directions were reiterated in Jan 21, 2011 order.
The attached Labor Ministry's Advisory Committee for compliance merits urgent attention. State Government has to comply in a similar format.

Hon’ble Supreme Court’s directions in its judgement dated January 21, 2011 is contained in paragraph no.s 14. The paragraph 14 of the Hon’ble Supreme Court’s order reads as under:
“14. In the matter relating to secondary exposure of workers to asbestos, though the grounds have been taken in the Writ Petition without any factual basis, again in the Rejoinder filed to the counter affidavit of respondent No.37, this issue has been raised by the petitioner in detail. In the earlier judgment of this Court in the case of Consumer Education and Research Centre (supra), hazards arising out of primary use of asbestos were primarily dealt with, but certainly secondary exposure also needs to be examined
by the Court. In that judgment, the Court had noticed that it would, thus, be clear that diseases occurred wherever the exposure to the toxic or carcinogenic agent occurs, regardless of the country, type of industry, job title, job assignment or location of exposure. The diseases will follow the trail of the exposure and extend the chain of the carcinogenic risk beyond the work place. In that judgment, the Court had also directed that a review by the Union and the States shall be made after every ten years and also as and when the ILO gives directions in this behalf consistent with its recommendations or conventions. Admittedly, 15 years has expired since the issuance of the directions by this Court. The ILO also made certain specific directions vide its resolution of 2006 adopted in the 95th session of the International Labour Conference. It introduced a ban on all mining, manufacture, recycling and use of all forms of asbestos. As already noticed, serious doubts have been raised as to whether `controlled use' can be effectively implemented even with regard to
secondary exposure. These are circumstances which fully require the concerned quarters/authorities in the Government of India as well as the State Governments to examine/review the matter in accordance with law, objectively, to achieve the greater health care of the poor strata of the country who are directly or indirectly engaged in mining
or manufacturing activities of asbestos and/or allied products. "

The reply on behalf of Secretary, Medical Education & Research, Chandigarh Administration has categorically submitted the following to the National Human Rights Commission, New Delhi in the Case No.2951/30/0/2011:“a. White Asbestos (Chrysotile Asbestos) is implicated in so many studies with the following diseases:-Mesothelioma (Cancer of Pleura),
Lung Cancer, Peritoneal Cancer, Asbestosis, And also consider as cause of following cancers:-Ovarian Cancer, Laryngeal Cancer, Other Cancer b. Diseases are produced in the person involved in Asbestos Industry.”

The reply dated May 29, 2012, Shri Piyush Singh, Joint Secretary, Government of Uttarakhand in Case No.2951/30/0/2011, has submitted to the NHRC a document Medline Plus Trusted Health Information for You, U.S. National Library of Medicine and the prescription of National Institutes of Health (NIH) highlighting the Treatment stating: “There
is no cure. Stopping exposure to asbestos is essential.”

A 14 page joint document of WHO and ILO titled “Outline for the Development of National Programmes for Elimination of Asbestos-Related Diseases” reads: The 58th World Health Assembly urged Member States to pay special attention to cancers for which avoidable exposure is a factor, particularly exposure to chemicals at the workplace and the environment. Asbestos is one of the most important occupational carcinogens causing about half of the deaths from occupational cancer.

In May 2007, the 60th World Health Assembly endorsed a global plan of action on workers' health 2008-2017 in which Member States requested the WHO Secretariat to include in its activities "a global campaign for elimination of asbestos-related diseases - bearing in mind a
differentiated approach to regulating its various forms - in line with the relevant international legal instruments and the latest evidence for effective interventions…" WHO's assistance to countries to eliminate asbestos-related diseases will therefore be particularly targeted to those Member States that still use chrysotile asbestos, in addition to assistance in relation to exposures arising from historical use of all forms of asbestos. WHO, in collaboration with
ILO and with other intergovernmental organizations and civil society, will work with countries towards elimination of asbestos-related diseases in the following strategic directions:
- by recognizing that the most efficient way to eliminate asbestos-related diseases is to stop the use of all types of asbestos;
- by providing information about solutions for replacing asbestos with safer substitutes and developing economic and technological mechanisms to stimulate its replacement;
- by taking measures to prevent exposure to asbestos in place and during asbestos removal (abatement);
- by improving early diagnosis, treatment, social and medical rehabilitation of asbestos-related diseases and by establishing registries of people with past and/or current exposures to asbestos.”

In view of the above, it is quite clear that there is a compelling logic for the central government and the Bihar’s Ministry of Environment & Forests to initiate elimination of asbestos based products and to decontaminate building of asbestos fibers.

Asbestos fibers are forms of silicates which belong to the serpentine and amphibious groups of minerals http://www.amacinc.com/asbestos_surveys.html

Thanks a lot for sharing this : Newcastle Asbestos