Note:On the morning of December 15, "Reporting of excessive dust fall from the Plant" to Central Pollution Control Board and Delhi Pollution Control Committee was done by Vimal Monga, former President of Sukhdev Vihar RWA. He wrote, "This is to bring to your notice that today morning we noticed all cars of DDA Flats, Sukhdev Vihar covered with dust falling from the emissions of the MSW WtE Plant, Okhla. The dust fall continued till 9.00 am. A sample of the dust from the balcony has been collected. It weighs about 100 gms from an area of 3 sq mtr. 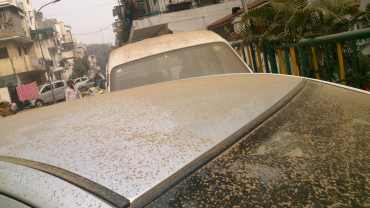 At about 8.00 am I called Mr. Tomar of the plant to inform about the incident. He said he is no more in the plant. He has been transferred to Head Office,I called Mr mandal- Vice President who informed of having left the job.I along with other resident went to plant and wanted to meet the on duty incharge. No body came to meet and discuss. Later on insistance the gate keeper gave me mobile number of HR Mgr Mr Chaturvedi Who in turn told that he cant help. He refused to give contact number of any senior responsible person. I asked him to inform to the concerned person and ask him to contact me. No body contacted me in this regard.I talked to Mr. BL Chawla Sr Env Engr. and appraised him of the situation. I wanted him to come and varify the quantum of the dust fall (Particulate Matter- Pollution Level). He Wanted me to inform Mr Sandeep Mishra-MS DPCC. I tried his mobile number but there was no response. I would request you to kindly visit the colony / plant  ASAP to assess the pollution level."

He addressed another SOS message to Shri Sanjiv Kumar- IAS, Chairman, DPCC,
Shri Sandeep K Mishra, Member Secretary, DPCC,Shri B.L. Chawla, Ms Ajeeta D Aggaewal & Mr Satinder Kumar-Sr. Env. Engrs., DPCC, Shri Ajay Tyagi-IAS, Chairman, CPCB, Shri J.S.Kamyotra-Member Secretary, CPCB, Shri B.Vinod Babu-Sr Scientist 'D' & Incharge. CPCB and Shri Bharat K Sharma, Sr. Env. Engr, CPCB. He wrote, " In continuation to the attached email informing about the excessive dust (fly ash) fall in our  DDA Flats,Sukhdev Vihar observed today morning (15/12/2013). The dust was emissions from the chimneys of the MSW WtE Plant, Okhla,
We approached the plant to inform about the incedent so as corrective measure could be taken. Mr Tomar informed to have been transferred to head office, Mr. Mandal Vice president informed have left the plant. Mr. Chakarbory-HR Manager informed not the concerned person and refused to give number of any responsible person. Security persons refused to give contact number of any responsible person. There is no display board informing about the name of company, address, responsible person and contact number in case of an emergency.The matter informed to the Sr. Env. Engineers- Ajeeta D. Aggarwal, Mr Satinder Kumar and Mr. BL Chawla of DPCC. Mr. BL Chawla noted the problem but asked me to contact Member Secretary. I kept trying MS number it was responding. Mr BL Chawla at 11 am informed that he is not able to contact Member Secretary, DPCC for directions in this regard for the spot check.The matter was brought to the knowledge of Shri J.S.Kamyotra-MS, CPCB and Shri B. Vinod Babu- Scientist 'D' & Incharge, CPCB who in turn agreed to coordinate spot check. Till 2.30 pm they could not arrange any team for spot.check /verification.Hundred of disturbed residents assembled at the gate the waste plant to talk to the management. No body from the plant came out to witness the pollution level. The Police remained present to ensure no untoward incident / law and order disturbance takes place. Shri Dharambir-MLA, AAP and Shri Manpreet-MLA, BJP Kalkaji joined and witnessed the alarming pollution level going on til 2 pm. They were surprised to see the callous attetude of the plant management not responding to the assembled civilized residents.Dust had covered the cars and open areas. A dust sample collected from the open area was about 100 gm/ 3 sq mtr.A display board installed inside the plant was showing SPM level of 127 and NOx 250. An expert from the Environment Enginnering said, the SPM level has to be above 1000 . The display is just factitious to befool public. Further, he said this real time data has to be made available online for public information.The Environment Expert informed the plant management had agreed to conform/ ensure / guarantee the EU emission standards. But why the MSW rules are being talked. This is a conspiracy between the Plant Management and regulatory authorities. They are misguiding the public and courts, which is a criminal act.The matter was informed to SHO of Sarita Vihar and New Friends Colony by the RWA Pocket A, Sukhdev Vihar. The copy is attached herewith for your reference.The residents of Sukhdev vihar want you to depute a team to look into the causes of the excessive pollution and submit report to the court. There should be a mechanism of spot checks on receipt of the complaint." Response of the authorties is awaited even as residents face yet another crisis.
Gopal Krishna

Delhi residents happy with defeat of Sheila Dikshit who supported waste incinerators in national capital
In a related development, an incineration based waste to energy plant in the suburban Jiading district, China exploded at 3.00pm on December 5, 2013 killing at least one person and injuring at least 5 persons. Coincidentally, National Green Tribunal (NGT) heard the case against the Chinese incinerator based waste to energy of Delhi’s Okhla on December 5, 2013, the day of the explosion at the Chinese waste incinerator. Explosion in Chinese incinerator shows that the claim made at page no. 102 of Rapid Environment Impact Assessment report of the Jindal’s Okhla plant that "....no likely adverse impact on people's health is predicted"   (i.e. during the operation phase) is totally incorrect.

It must be noted that Delhi’s Okhla also has a Chinese incinerator based waste to energy plant located in Sukhdev Vihar amidst residential colonies and in the vicinity of a bird sanctuary, vegetable market, hospitals and educational institutions, which faces bitter resistance from the residents, environmental groups and waste recycling workers. They have been demanding closure of the power plant by Delhi’s Timarpur-Okhla Waste Management Co Pvt Ltd (TOWMCL) of M/s Jindal Urban Infrastructure Limited (JUIL), a company of M/s Jindal Saw Group Limited. The Jindal's plant is meant only for 2050 tons of municipal waste but has a capacity for 10, 000 tons. After 28 dates of hearing at Delhi High Court and about a dozen hearing at the National Green Tribunal (NGT), the matter is listed for hearing yet again on January 15, 2014.

Chinese incinerator explosion buried an unknown number of people after part of the 400-square-meter plant building collapsed according to, Xinhua news agency. Even as the search and rescue is on, the city government set up an accident investigation team and environmental safety assessment team was established.

A team of environmental activists visited the site of the Jiangqiao incinerator based waste to energy plant on December 10 who “were stopped to go to the factory.”  The team plans “to write an open letter to request Shanghai Municipal government to release the information they should do, such as the basic information of reasons leading to explosion and fines to the operator. We also request there should be experts on incineration from the environmental group joining the accident investigation.”  The impact of incinerator explosion on public health and environmental health must be disclosed. Jiangqiao is a town of Jiading District, Shanghai.

The explosion happened at an incineration based waste to energy plant with a capacity of 1,500 tons per day which is 10% of Shanghai's total amount of waste. It is located at 800 Suide Road, Jiading District. This Shanghai Hongqiao incineration plant of Shanghai World Renewable Energy Co., Ltd. Shanghai Ring Renewable Energy Co., Ltd. covers an area of 13.6 hectares.  The injured were rushed to the Putuo District Central Hospital for treatment. Surrounding residents also said that when the explosion occurred just 100 meters away from the factory felt the vibration. After the incident, the nearby residents were not required to evacuate. Preliminary investigation noted that the accident occurred in the leachate treatment plant. The cause of the accident is under further investigation.

In 2010, it was reported that Beijing is attempting to combat stench and stink of garbage crisis by installing some 100 giant deodorant guns, high-pressure fragrance sprays.  After adopting tried, tested and failed Chinese incinerator technology, which faces relentless opposition, Delhi Government should resist the temptation of falling for fake solutions like deodorant guns. Waste incinerator technology is also a fake solution as it takes governments for a ride by making them adopt proposals for building landfills in the sky.

Ministry of Environment & Forests had granted environment clearance on March 21, 2007 to the Okhla waste toe nergy plant while the matter was being heard at the Delhi High Court and without waiting for final hearing.  The plant started operating on January 2012, again while the hearing was on and pending final order. The original clearances were granted for refuse derived fuel (RDF) technology but the proponents deviated from it and adopted the Chinese technology. This came to light during appraisal ordered by Jairam Ramesh as the Environment Minister who had written to Sheila Dikshit, Delhi Chief Minister confirming violations of environmental regulations. Meanwhile, Delhi residents expressed happiness with the electoral defeat of Sheila Dikshit who vociferously supported the waste incinerator based power plant in Okhla, Narela Bawana and Ghazipur.

In a related development, an incineration based waste to energy plant in the suburban Jiading district, China exploded at 3.00pm on December 5, 2013 killing at least one person and injuring at least 5 persons. Coincidentally, National Green Tribunal (NGT) heard the case against the Chinese incinerator based waste to energy of Delhi’s Okhla on December 5, 2013, the day of the explosion at the Chinese waste incinerator. Explosion in Chinese incinerator shows that the claim made at page no. 102 of Rapid Environment Impact Assessment report of the Jindal’s Okhla plant that "....no likely adverse impact on people's health is predicted"   (i.e. during the operation phase) is totally incorrect.
(Protest against Toxic emission from Jindal's Chinese incinerator in Delhi)
Environmental, resident and labour groups demand that all governments to start eliminating all Persistent Organic Pollutants (POPs) and incinerators which emit POPs. This means stopping all existing POPs sources, including dioxins. The explosions of toxics ashes from incinerator plants are always imminent and slow but sure emissions are routine. The plants like the Okhla incinerator based power plant must be closed and investment made into other, safer methods of waste disposal.
For Details: Gopal Krishna, ToxicsWatch Alliance (TWA), Mb: 09818089660, E-mail:gopalkrishna1715@gmail.com, Web: www.toxicswatch.com
Mr Liwen Chen, Phone: 1521 034 7427, E-mail: liwenchen9230@gmail.com, Web: http://www.nu.ngo.cn