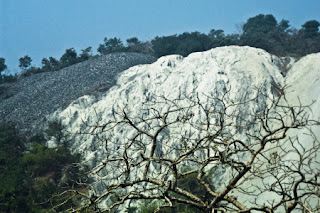 This is with reference to the presentation which I had made before you at the Jaipur conference co-organised by Australian University and MLPC. Subsequent to that I met Dy. Director general, DGMS Ghaziabad on September 4, 2013 with regard to relief from the abandoned asbestos mines in Roro, Chaibasa, Jharkhand. I submitted a letter to him but he asked me to contact you in this matter.
This is to draw your kind attention towards the asbestos related incurable occupational and non-occupational diseases caused by the exposure to lung cancer causing fibers from the abandoned asbestos mines in Roro.
It may be noted that the liability for asbestos related diseases remain a huge issue in the entire developed world leading to bankruptcy of hundreds of companies due to compensation money they have to pay to victims of asbestos related deaths and ailments. Dow Chemicals Company has set up an asbestos compensation fund of 2.2 billion US Dollars for the asbestos related liability of Union Carbide Corporation which is now its subsidiary in the aftermath of the Industrial Disaster of Bhopal.  I submit that human biology of people in Jharkhand isn’t any different.

It is important to prepare a Health Management Plan for Mesothelioma, Lung cancer and Asbestosis related problems emerging for these abandoned mines Jharkhand.

I submit that it is relevant to recollect the sad legacy of undivided Bihar, the unpardonable act of vanishing hazardous companies and the asbestos mines in places like Roro Hills in Chaibasa, West Singhbhum. The death toll and the disease burden that has emerged due to this abandoned asbestos mine must be ascertained because it would provide valuable lessons in preventive medicine. The Roro hills is infamous for an abandoned asbestos mine.  It is estimated that nearly 0.7 million tons of asbestos waste mixed with chromite-bearing host rock lies scattered here and in 25 years no study has been conducted to assess the fate of this hazardous waste dumped improperly on top of Roro hills. The waste material extends several meters down slope spreading into the paddy fields on the foothills of Roro. About 40 centimeters of thick silty waste of crushed rocks is spread over the paddy fields and poisoning the local residents.

I submit that there is a need for an official health survey of 14 villages around the Roro hills and the former workers of the Roro asbestos mines. There is a link between the asbestos exposures and several adverse health effects such as shortness of breath indicating respiratory ailments.

I wish to inform you that local newspaper clippings from Singbhumi Ekta, a weekly from Chaibasa, published between January and August 1981, include a press release from the late P. Mazumdar, the leader of the United Mine Workers Union, affiliated to All India Trade Union Congress (AITUC) states that 30 workers from Roro mines had died of asbestosis. You may ascertain the fate of ex-workers from the Roro mines from Roro and Tilaisud villages. The Roro mines were closed down in 1983 after Hyderabad Asbestos Cement Products Ltd. (now known as Hyderabad Industries Limited) decided that they were no longer profitable even at the cost of human health in general and workers health in particular.

Dumbi Boipai, an ex-miner who feels recurring pain in his chest remembers his fellow miners who all are dead, he mumbles first to himself and then aloud, “Pooliya Sondi, Rohto Gop, Vijay Singh Sondi, Rahto Samadh,” and he suddenly refuses to speak as he takes a gasp. Some like Mukund Sundi are barely alive. His young wife is helpless, resigned, refusing to talk.  “I worked in the crusher, where they produced asbestos,” says Mukund Sundi. They use to pay us Rs 7 a day.” Some of his symptoms match TB, but doctors can't pinpoint his illness and so they offer no cure.

There has been no assistance for Mangal Sundi from his former employers. “Koi nahi aya madad ke liye. Koi mera ilaj bhi nahi karwata.” (No one ever has come up for help. No one got me treated.), Sundi in a whisper.

There are many victims of Roro and the 14 surrounding villages who recall days of reckless mining operations and deplorable conditions of miners. Persistent cough, haemoptysis, pain in chest while breathing is common health complaints. As per Jun Sunwai reports of a public hearing by Jharkhand Organisation for Human Rights (JOHAR) conducted in 2003, the testimonials of villagers say:

Jeevan Tubid, 50, is an ex underground mine worker who lost his leg while working in the underground mines of Roro as a loader. He has almost lost his eye sight and has intense pain in his lower back. No compensation has been paid yet to him by the mining company.

Pandu Pradhan, 45, almost lost his eye sight while working as a Timber man in the underground mines of Roro. The company gave him spectacles but no compensation.

Lakhan Doraiburu, 70, heavy equipment fell on his leg while working in the plant. No proper treatment was given to him for his injury. He still has lot of pain in his legs. He recalls workers in milling plant were given jaggery to eat. Many of his co-workers in the plant died while working or after the closure of the mines. Workers died of chest pain and spitting blood. No count of how many workers died and of what disease. No medical tests were done on workers while they were employed. No information was divulged on the medical conditions of the workers who were examined by the company doctors.

Indeed if there is one example of sheer corporate and Government negligence, it is this.

I submit that workers who are exposed to asbestos and they are suffering from asbestos-related diseases like asbestosis and mesothalamia. Doctors call them TB patients, as they want to save their employers from giving any compensation.

I submit that as per section 22 of the Air (Prevention and Control of Pollution) Act 1981, all asbestos mines have to be closed. The Hyderabad Industry Limited of the CK Birla Group did not close their mines at Roro village at Chaibasa, Jharkhand. The asbestos fibres that are blown into the wind, that seep into the fields and rivers, still exist 30 years after the mines shut down.

I submit that at present there is a moratorium on grant/renewal of asbestos mines as per a letter of Government of India dated July 9, 1986. What led do this continuing moratorium? In the pre-moratorium era workers were knowingly exposed to carcinogenic fibers of asbestos by a company which had engaged them in the mining of asbestos.
I submit that the consistent failure of several institutions both at the state and the national level is quite stark. None of the institutions including Union Ministry of Mines, Government of India seem to have heard about public health crisis that has engulfed Roro.

I submit that there a case for complete ban on all kinds mining of asbestos and ensuring legal and medical remedy for the victims of occupational and non-occupational exposure to asbestos. It must be noted that unless the company which abandoned the asbestos mines is made accountable and liable for its acts of omission and commission, the victims of asbestos related diseases will not get justice in Roro and even in manufacturing and other allied activities of the asbestos industry.

In view of the above I urge you to undertake remedial measures for present and future generations can be taken before these victims of Jharkhand State get engulfed in the epidemic of incurable but preventable asbestos related diseases. To begin with a compensation fund and a remediation cell for abandoned mines of Roro may be set up as it is of seminal importance to prevent at least preventable diseases and deaths.
Your reply and considered advice in this matter will be eagerly awaited.
Thanking You
Yours Sincerely
Gopal Krishna
Occupational Health India (OHI)
ToxicsWatch Alliance (TWA)
Share this article :
Labels: Environment and Occupational Health