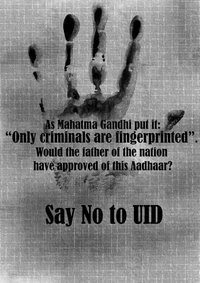 The Interim Order of Central Information Commission (CIC) has fixed September 10, 2013 to hear the matter of refusal by Planning Commission’s Unique Identification Authority of India (UIDAI) to share copy of all contracts given to French and US biometric companies, namely, L1 Identity Solutions and Accenture respectively. The Case No. is. CIC/SS/A/2012/003157.

In CIC’s 3 page Interim Order dated 26.7.2013 it is recorded that “The appellant’s representative (Gopal Krishna, Member, Citizens Forum for Civil Liberties) filed written submissions before the Commission which inter-alia states that denial of information is not in public interest. The people of India have a right to know details of the contracts issued by an Authority set up under an order of the Executive and the Authority claiming to act on behalf of the Government of India, entering into contracts with private firms, both foreign and India. Since the contracts have been given pertained to the collection and processing of personal information of every person  resident in India, including citizens, the people have a right to the said information.”

It is also recorded that “The third parties (namely L1 Identity Solutions and Accenture) requested not to disclose the information to appellant (Col. Mathew Thomas, former defence scientist), as these should be considered as information provided under strict commercial confidence and includes trade secret, propriety information of the third parties.”

The Interim Order reads: “The Commission considers it appropriate that the custodian of information i.e. senior level official of Technology Division of UDAI attends the hearing along with written submissions, justifying non-disclosure of the information sought by the appellant under the provisions of Section 8 (1) (d) of the RTI Act.” The order was issued by Sushma Singh, the Information Commissioner.

Earlier, on June 24, 2013, there was a hearing before the Central Information Commission (CIC), August Kranti Bhawan, New Delhi in the matter of denial of copies of the contracts awarded by UIDAI to foreign companies like L1 Identities Solution and Accenture. The former has been a US company that admittedly worked with intelligence agencies of USA. It has since been bought over by French corporate conglomerate, Safran Group after the US Committee on Foreign Investment in the United States (CFIUS) was convinced that there are no unresolved national security concerns with respect to the transaction. The latter is a US company that works with security agencies of USA. The next hearing will be after a month since junior UIDAI officials could not respond to questions raised by Mrs. Sushma Singh, the Information Commissioner at CIC. The UIDAI is citing Section 8 (1) d of the Right to Information Act to deny the copies of the contract given to these foreign intelligence companies.

The relevant section of the Act reads: “Notwithstanding anything contained in this Act, there shall be no obligation to give any citizen— information including commercial confidence, trade secrets or intellectual property, the disclosure of which would harm the competitive position of a third party, unless the competent authority is satisfied that larger public interest warrants the disclosure of such information”.

The above interim order was passed after this hearing.  CIC had asked UIDAI to file written submissions explaining the sensitive content of the text of the contract beyond merely quoting the Act.

It may be noted that CIC in its order dated July 27, 2009 has already given its verdict in the matter saying, “Any agreement entered into by the government is an agreement deemed to have been entered into on behalf of the and in the interest of ‘We the people’. Hence if any citizen wants to know the contents of such an agreement he is in the position of a principal asking his agent to disclose to him the terms of the agreement entered into by the agent on behalf of the principal. No agent can refuse to disclose any such information to his principal”. By withholding the information, it is clear that UIDAI is safeguarding the interest of foreign interest and not the public interest and the national interest. Gopal Krishna, Member, Citizens Forum for Civil Liberties (CFCL) has been represented Col. Mathew Thomas, former defence scientist and the applicant at the CIC hearing. The CIC order dated 26.7.2013 underlines it.

It must be noted that as a consequence of Safran’s purchase of L-1 Identity Solutions, the de-duplication contracts of UIDAI’s Centralized Identities Data Repository (CIDR) and Home Ministry’s National Population Register (NPR) which was given to foreign companies on July 30, 2010 to three companies now lies with two companies of French and US origin.  When Nandan Nilekani, the UIDAI Chief was asked about the sensitivity of de-duplicating firms which are working for the US intelligence agencies having been shortlisted, he replied, “These guys are just there for the de-duplication. We just give them the data, they compare and answer back. The data is going to their engineer. It's going inside our software. It's inside our firewall”.

Will UIDAI and its chief explain whether or not Pentagon’s data leaked by Wikileaks and data leaked by Edward Snowden inside their software and their firewall?