Why govt should scrap Adani's Mundra plan for shipbreaking


By refusing permission for the proposed ship-breaking facility, India can send a categorical message to the foreign ship owning countries that they should keep their own waste and recycle it, feels Gopal Krishna.

On July 30, 2013 there will be a public hearing for a new ship-breaking facility near Mundra West Port in Gujarat’s Kachchhh (Kutch)  district proposed by Gautam Adani led Adani Ports and Special Economic Zone Limited (APSEZL). It was formerly known as Mundra Port and Special Economic Zone Limited. The public hearing will happen on the basis of the Draft Environmental Impact Assessment (EIA) prepared in May 2013 by Mecon Limited, a Government of India Undertaking under the Union ministry of steel for their proposed ship-breaking/recycling facility. 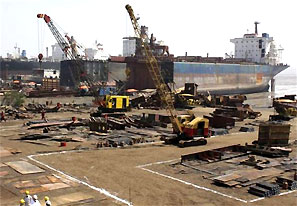 Adani group had entered into an agreement with the Gujarat Maritime Board (GMB) for developing port and related activities at Mundra but its plan to enter the ship-building business by setting up a shipyard at Mundra appears to have been derailed. But in a new development it has proposed to re-enter the ship-breaking business. It maybe noted that the Adani-led group has been in the ship-breaking business in the US till recently.
As per its Draft EIA report, this new ship-breaking/recycling facility has been envisaged adjacent the existing Mundra West Port, which is being expanded. The proposed ship recycling facility will handle ships to recover about 300,000 tons per year of various materials.
Mundra West Port is located near Vandh Village in Mundra Taluk of Kachchhh District in Gujarat about 16 km south-west of Mundra. The project is within the port limits notified as Special Economic Zone (SEZ). The proposed ship recycling facility measures 40.7432 hectare adjacent to the existing Mundra West Port.
It is germane to note that citing massive pollution as a reason, Sachana shipbreaking plots in Jamnagar has been closed as per the order dated November 22, 2011 from the Office of Chief Forest Conservator, Gujarat government. The order is specifically meant “to cancel the plots allotted to Sachana ship braking yard. These plots are in the land of Forest / Marine Sanctuary”.
The order reads: “Because of ship-breaking, harmful objects like arsenic, mercury, asbestos, oil, etc could harm marine life in the long time. This leads to complex problems for protecting and conserving the Marine National Park and Marine sanctuary.”
These observations are quite relevant for the proposed ship-breaking operations in the coastal environment ofMundra West Port given the fact that, “at present most of the land is still submerged and only a minor portion is located in the inter-tidal zone.” 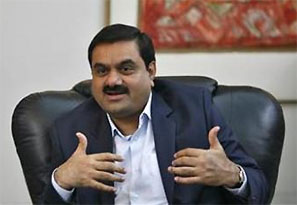 EIA report also revealed that, “the land for the project is being created by dumping dredge spoils, generated due to expansion of Mundra West Port, up to 7.0 m above the chart datum.”
Earlier, Kheti Vikas Sewa Trust and Machimar Adhikar Sangharsh Sangathan (MASS) had complained to the union ministry of environment & forests regarding the severe impact of Mundra Port and SEZ Limited area on environment safety and integrity.
The ministry constituted a committee whose terms of reference is relevant in this case since by implication it underlines why Adani’s proposed ship-breaking facility too should not come up in this ecologically fragile zone. The committee examined the allegations regarding bunding/diversion/blocking of creeks and reclamation etc., and distortion of original High Tide Line (HTL).
Destruction of mangroves and leveling of sand dunes, the likely impacts on agriculture due to ingress of salinity resulting from creation of huge water body of sea water for Adani power plant and the issues related to earthquake, tsunami and other natural calamities are pertinent to the proposed ship-breaking facility.
It is clear that in a tactical and clever manner the company has taken environmental clearance for its various projects in the proposed region in installments by outwitting the regulatory agencies. This ploy is apparent when one reads in its claim in the Draft EIA report that “APSEZL had received Environmental and CRZ Clearance for Water Front Development Clearance from the Ministry of Environment and Forests, Govt. of India, vide letter no.10-47 / 2008 – IA-III dated 12th January, 2009 and addendum dated 19th January, 2009.”
Such truncated approach in grant of environmental clearances “has led to massive ecological changes with adverse impacts” the committee observed.  The proposed ship-breaking facility is bound to aggravate the situation if cumulative and induced impact is taken into consideration.
Technical EIA Guidance Manual for Ship-breaking prepared for the Union Ministry of Environment & Forests myopically states, “The economics of the system was very straightforward - the owner receives money for his ship; the breaker receives enough money for his scrap to pay his expenses and make a profit.” This straightforward economics does not include the human and environmental cost of the hazardous ship-breaking activity.

Adani has been in the shipbreaking business in the US, which is a non-party to Basel Convention unlike India and has adopted a policy to transfer its obsolete ships to countries like India. Its attempts faced legal challenge in the case of SS Norway, SS Independence and Exxon Valdez.
It admits that in Indian waters, “the ships are scrapped directly on the beaches or the vast inter-tidal mudflats exposed daily by about 10m tidal gauge. The beaching method of the Indian sub-continent relies heavily on low labour cost, since it involves very little mechanisation.” This beaching method which Adani’s company proposes in Mundra is fatally flawed.
The four fatal flaws of the beaching method for ship-breaking include: cranes cannot be placed alongside ship, lack of access by emergency vehicles and equipment, no possibility for containment and coastal zone, intertidal zone is environmentally sensitive and managing hazardous wastes in the intertidal zone can never be environmentally sound.
Unmindful of these ecologically destructive practices in an exercise of sophistry, Nikos Mikelis, Head of the Marine Pollution Prevention and Ship Recycling Section of International Maritime Organisation (IMO) argues that it was "neither logical nor ethical to stop sending ships to South Asia" at the behest of European and Japanese ship owners demonstrating complete disregard to the fragile coastal environment which has been heavily contaminated and is crying for remediation.
The way Alang beach has been colonised by the foreign ship owners Mundra too, it seems will be handed over to shipping companies from the industrialised countries for dumping their end-of-life ships against the cardinal principal of hazardous waste management.
In the post Environment Protection Act, 1986 era, there is a compelling logic for the conditional environmental clearance given to ship-breaking operations in the coastal environment to be revoked. The first ship, called ‘Kota Tenjong’ was beached in Alang coast on February13, 1983 when the adverse consequences of ship-breaking was not known and there was no rule to protect coastal environment.
IMO’s Marine Environment Protection Committee (MEPC) contrary to its name and mandate is evidently colluding with countries like Japan and USA which opposed Basel Convention that regulates and prohibits hazardous wastes trade from the outset. 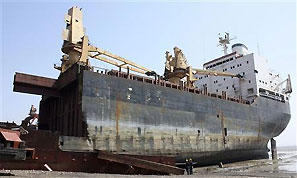 If the embargo on both national and international media which stops journalists and researchers from entering the Alang yards to ascertain for themselves as to whether or not there is any improvement in the “graveyards” (of Alang) is lifted then they can reveal the disastrous impact of ship-breaking activity which has polluted the beach beyond remedy.
Permitting free trade in hazardous wastes like end-of-life ships is anti-national, anti-nature and anti-worker. It is well known that waste follows the path of least resistance. Indian regulatory agencies have either failed to see through the corruption being indulged in by foreign ship owning countries and companies to bulldoze hazardous wastes in the name of recycling or they are colluding with IMO which is undermining UN’s Basel Convention on Transboundary Movement of Hazardous Wastes and Their Disposal hard earned by developing countries like India at the behest of the traditional enemies of this convention.
The steel scrap generated from ship recycling contributes to around one per cent of India’s domestic steel demand and is primarily a source of raw material for the re-rolling mills which convert this scrap to mainly produce rods and bars which find application in construction industry. Ship-breaking activities contribute to total scrap steel supply and a significant number of re-rolling mills are increasingly dependent on them.
This has also given birth to the issue of radioactive steel because of which the secondary steel products from India are globally under scrutiny. It may be noted that the steel ministry is the focal point for the ship-breaking activity although proposed Shipbreaking Code 2013 reveals that foreign ship owners seem to have prevailed on the government to hand over its jurisdiction to the ministry of shipping.
Govrenment attitude makes ship-breaking in India fall under a WIMBY (Welcome Into My Backyard) logic wherein waste is welcomed or application of Lawrence Summers' Principle wherein it was argued that it makes impeccable economic logic to transfer hazardous industries to developing countries.
By refusing permission for the proposed ship-breaking facility, India can send a categorical message to the foreign ship owning countries that they should keep their own waste and ‘recycle’ them ad infinitum.
P.S: Is it coincidence that the sinking of Panama flagged MV Rak Carrier carrying on board 60,000 tonnes of coal for Adani Enterprise Limited reportedly drifted about 20 miles off Mumbai on August 4, 2011 amidst an apprehension that it may have been staged to claim insurance money for its cargo of coal on board/ The ship sank and caused oil spill. Was it an exercise meant to test waters and the regulatory strength of agencies involved?
Gopal Krishna
http://www.rediff.com/business/special/why-govt-should-scrap-adanis-mundra-plan/20130722.htm
Share this article :
Labels: Hazardous Industries