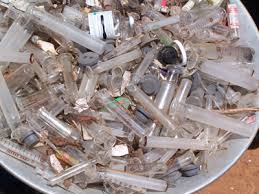 Okhla medical waste incinerator was supposed to be shut down by 15 July, 2013 as per the order of the Delhi High Court. In order to escape contempt of court, the Synergy company, the biomedical waste incinerator operator has filed a review application and has chosen not to comply with the Court's order with no consequence so far. It appears to be a ploy to get the matter shifted to National Green Tribunal. The same ploy may have been used in the residents' case against Okhla municipal waste incinerator being operated by Jindal company.

Delhi High Court bench of Chief Justice and Justice V K Jain came to the rescue of residents of Okhla’s Sukhdev Vihar who made representations against operation of the biomedical waste incinerator due to adverse effect on their health. The judgment was pronounced on 15.01.2013.
The Court held that “We, therefore, direct respondent No. 2 Government of NCT of Delhi and respondent No. 7 M/s. Synergy Waste Management Pvt. Ltd. to shift the bio-medical waste disposal facility, being operated near Sukhdev Vihar, to a suitable site. The site suitable for shifting of the said facility in terms of this order would be identified by the Chief Secretary, Government of NCT of Delhi, within three months from today in consultation with DDA and DPCC and the facility in question would be shifted within three months thereafter, i.e., within 06 months from today. M/s Synergy is permitted to continue to operate the facility at the present site till it is shifted to a new site in terms of this order, or 06 months from today, whichever is earlier. If necessary, any further direction with respect to the shifting of the said facility, in terms of this order, will be sought from this Court. Both the petitions stand disposed of in terms of this order.”

The writ petition filed by the residents of Sukhdev Vihar and adjoining area had sought closure of the biomedical waste incinerator facility primarily on the ground that being very close to densely populated residential colonies, it was creating poisonous and hazardous environment for the residents of those colonies, thereby adversely affecting their health and degrading environment for all times to come.

The judgment records, “As per the guidelines of Central Pollution Control Board (CPCB), the Common Bio-Medical Waste Treatment Facility (CBWTF) should be located at a place reasonably far away from residential and sensitive areas so that it has minimal impact on these areas. It was noted in the guidelines that such a facility will require minimum of one acre area and, therefore, preferably should be set up on a plot size of not less than one acre.”

The order observes, “10. In Master Plan for Delhi, 2021, notified on 07.02.2007, hazardous waste processing viz. hospital/medical/industrial waste is amongst the industries, manufacturing of which shall be prohibited within National Capital Territory of Delhi.”

It further holds that “It is not in dispute that bio-medical waste is a hazardous waste which can be highly injurious to human life. That precisely appears to be the reason for its being included in the list of prohibited/negative list of industries. Admittedly, incinerators are used in the facility meant for disposal bio-medical waste. This has also been noted in the guidelines issued by Central Pollution Control Board (CPCB) on treatment of common bio-medical waste and installation of incinerator is a mandatory requirement for such plants. Incineration is a controlled combustion from where waste is completely oxidized and harmful microorganisms present in it are destroyed/denatured under high temperature.”

The judgment refers to ‘The summary of “Epidemiological Studies on Adverse Health Effects Associated with Incineration” would show that medical waste incinerators are a leading source of dioxins and mercury in the environment and there is link between incinerator emissions and adverse health impacts on incinerator workers and residents living around the incinerators.’

The observations made in the judgment will have far reaching implications. It reads: “Both older and more modern incinerators can contribute to the contamination of local soil and vegetation with dioxins and heavy metals. In several European countries, cow‟s milk from farms located in the vicinity of incinerators has been found to contain elevated levels of dioxin, in some cases above regulatory limits. Increased levels of dioxins have been found in the tissues of residents near to incinerators in the UK, Spain and Japan. At an incinerator in Finland, mercury was increased in hair of residents living in the vicinity. Children living near a modern incinerator in Spain were found to have elevated levels of urinary thioethers, a biomarker of toxic exposure. “ It notes that “After 2 years of operation of incinerator, dioxins levels were found increased by about 25% in both groups living between 0.5 to 1.5 and 3.5 to 4.0 km away (201 people) of people. In the repeat analysis, the increase was in the range of 10-15%”.

The High Court dismissed the contention of M/s Synergy Pvt Ltd is far away from residential localities such as Sukhdev Vihar. On inquiry it was found that the distance between the said facility and their colony is less than 30 metres.

The bench observed that “This is a mandatory requirement of the guidelines issued by CPCB, that such facility should be far away from residential and sensitive areas. This requirement needs to be strictly complied while identifying a suitable site for shifting the facility of M/s Synergy.”

The judgment is quite relevant for the upcoming hearing in the National Green Tribunal of the case filed by the resident’s welfare association (RWA) of Sukhdev Vihar, Okhla against the municipal waste incineration power plant is being operated by Delhi's Timarpur-Okhla Waste Management Co Pvt Ltd (TOWMCL) of M/s Jindal Urban Infrastructure Limited (JUIL), a company of M/s Jindal Saw Group Limited.

For reasons I don't completely understand, Pharmacy in our town periodically dumps all their gauze packages into a big bin and sells them for practically nothing. Same with cotton. I usually buy some when I see that to keep us up to speed. Medical waste disposal Washington DC

Hello,
Nice post. Biomedical waste must be properly managed to protect the general public, specifically healthcare and sanitation workers who are regularly exposed to biomedical waste as an occupational hazard. In hospitals, medical waste, otherwise known as clinical waste from healthcare premises, such as hospitals, clinics. Thanks for sharing it..