Patna: Proving Sushil Kumar Modi's defence of anti-environment hazardous asbestos plants in his role as Bihar Environment Minister as an indefensible and wrong act, the Bihar State Pollution Control Board (BSPCB) has cancelled the ‘No Objection Certificate’ given to company in response to Bihar Chief Minister’s promise of ‘puncturing’ hazardous asbestos factories in the fertile State. 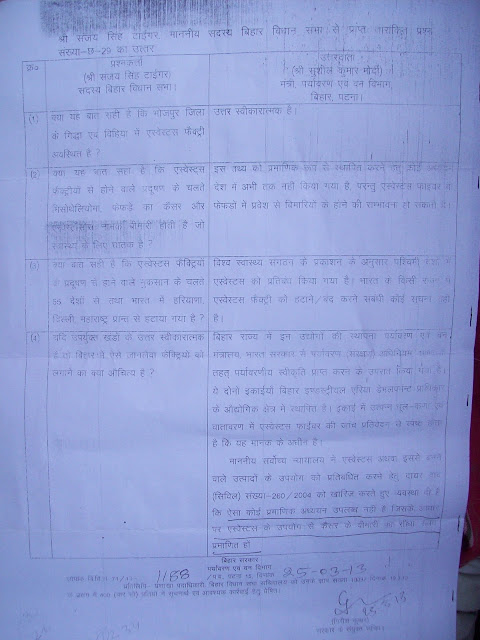 Sushil Modi's misleading reply in the State Assembly and the cancellation order of BSPCB is attached. BSPCB's order has been filed in the Patna High Court which heard the matter today following a case filed by the Utkal Asbestos Limited (UAL) Industries Ltd.

Meanwhile, Bhojpur District Magistrate has sent his report on the illegalities and irregularities committed by Utkal's Asbestos plant in Giddha, which commenced without ant public hearing. Paryawaran Swasthya Suraksha Samiti, Koilwar has been campaigning against the asbestos plants of Bhojpur in Bihiya and Giddha.

In his reply in the State Assembly, Sushil Kumar Modi, Bihar Minister of Environment & Forests has been misled into saying “Hon’ble Supreme Court while dismissingthe Writ Petition (Civil) No. 260/2004 filed to get asbestos and products made from it, held that there is no available credible study on the basis of which direct relationship of cancer disease with use of asbestos can be proved.”

Contrary to what the Bihar Environment Minister said, Supreme Court in its judgment in the above mentioned case, dated January 21, 2011at paragraph 14 reads as under:
“14. In the matter relating to secondary exposure of workers to asbestos, though the grounds have been taken in the Writ Petition without any factual basis, again in the Rejoinder filed to the counter affidavit of respondent No.37, this issue has been raised by the petitioner in detail. In the earlier judgment of this Court in the case of Consumer Education and Research Centre (supra), hazards arising out of primary use of asbestos were primarily dealt with, but certainly secondary exposure also needs to be examined by the Court. In that judgment, the Court had noticed that it would, thus, be clear that diseases occurred wherever the exposure to the toxic or carcinogenic agent occurs, regardless of the country, type of industry, job title, job assignment or location of exposure. The diseases will follow the trail of the exposure and extend the chain of the carcinogenic risk beyond the work place. In that judgment, the Court had also directed that a review by the Union and the States shall be made after every ten years and also as and when the ILO gives directions in this behalf consistent with its recommendations or conventions. Admittedly, 15 years has expired since the issuance of the directions by this Court. The ILO also made certain specific directions vide its resolution of 2006 adopted in the 95th session of the International Labour Conference. It introduced a ban on all mining, manufacture, recycling and use of all forms of asbestos. As already noticed, serious doubts have been raised as to whether `controlled use' can be effectively implemented even with regard to secondary exposure. These are circumstances which fully require the concerned quarters/authorities in the Government of India as well as the State Governments to examine/review the matter in accordance with law, objectively, to achieve the greater health care of the poor strata of the country who are directly or indirectly engaged in mining or manufacturing activities of asbestos and/or allied products.”

It is clear that both the Supreme Court and Court have taken note of the resolution of WHO and ILO which seek elimination of all forms of asbestos.

The then Bihar Environment Minister was asked: Is it true that due to pollution happening due to asbestos factories, diseases like Mesothelioma, Asbestosis, lung cancer occur which is hazardous to health?

He replied, “So far there has been no study in the country to establish this fact in a credible manner.”

The then Bihar Environment Minister should note that Smt Sushma Swaraj has informed the Parliament, “…the Indian Council of Medical Research (ICMR) is of the view that long term exposure to any type of asbestos can lead to development of asbestosis, lung cancer and Mesothelioma” and referred to the need for complying with “ILO directions” as per Supreme Court order on August 13, 2003.

As Bihar Environment Minister Modi failed to note that Environment Impact Assessment (EIA) reports also categorically admits to the relationship between exposure to asbestos and diseases like mesothelioma, asbestosis and lung cancer.

He remained blissfully unaware that Union Minister of Health and Family Welfare, Dr. C.P. Thakur had informed the Parliament that “Some of the countries in the world like France, U.K., Sweden, Norway, Denmark, Netherland, Finland, Germany, Italy, Belgium, Austria, Poland and Saudi Arabia have banned the use of Asbestos” on August 22, 2001.

He remained unaware although he is a member of Bihar Legislative Council (BLC) he feigned ignorance about the views of Chairman, BLC, Dr Thakur and Smt Sushma Swaraj regarding asbestos hazards.

It must be noted that Secretary (Labour), Bihar was a member of a 11 member Working Group of a Planning Commission to prepare the Xth Five Year Plan on Occupational Safety and Health at the workplace under the Chairmanship of Vinod  Vaish, Secretary, Ministry of Labour, Government of India vide their order no. M-13015/9/2000-LEM/LP dated 27.04.2001. In its 159 page report dated September 2001, the Working Group noted that “The workers are also exposed to a host of hazardous substances, which have a potential to cause serious occupational diseases such as asbestosis…” It has recorded that various studies conducted by the Central Labour Institute have revealed substantial prevalence of occupational health disorders amongst the workers such as Asbestosis. The prevalence rate for Asbestosis was reported to be 7.25%. It has been acknowledged that “At the same time the number of occupational diseases reported is very meager…This makes it evident that early identification of occupational diseases is required. It has recommended that “To meet these requirements, measures are needed for diagnostic facilities and appropriate training in the field of occupational health. Occupational health hazards and diseases to the workmen employed in asbestos industries are of great concern to the industries, Govt. and the public. The Honorable Supreme Court of India in its judgement dated 27th January, 1995 relating to the Public Interest Litigation No.206 of 1986 had given several directions concerning the protective measures to be taken against the hazards of exposure to asbestos at workplaces such as mining and manufacturing activities. In the light of Supreme Court directives, it is proposed to launch a comprehensive programme for the protection of the health of the workers engaged in hazardous industries with adequate mechanisms for monitoring of work environment and diagnosis and control of disease.”

It is noteworthy that Bihar Chief Minister Nitish Kumar met the leaders of ban asbestos movement met the leaders at his residence at 1, Anne Marg in Patna on February 13, 2013. The Chief Minister expressed outrage at the granting of ‘No Objection Certificate’ by Bihar State Pollution Control Board (BSPCB) to hazardous asbestos based factories in fertile agricultural lands. In a remarkable move Bihar Chief Minister had phoned Chairman, BSPCB and fixed an appointment for the villagers of Vaishali for February 14, 2013 and expressed his disapproval for asbestos based factories to him in front of the leaders of the left parties and the villagers’ committee.

Struggle of villagers of Vaishali’s Chaksultan Rampur Rajdhari near Panapur in Kanhauli Dhanraj Panchayat in Goraul block against asbestos based factory has reached a decisive phase. Villagers have been protesting against this lung cancer causing hazardous plant under the banner of KBJBJC for more than 2 years.

After the villagers Mahadharna of June 14, 2012, the district administration had put a stay on the construction of the factory. When the construction started again on December 16, 2012, the villagers blocked the Mahua-Samastipur road for 9 hours to express their protest against the proposed white asbestos plant of UAL company in their village on June 14.
Cancer causing white asbestos also called chrysotile asbestos is banned in 55 countries.

It is noteworthy that "The Government of India is considering the ban on use of chrysotile asbestos in India to protect the workers and the general population against primary and secondary exposure to Chrysotile form of Asbestos." This has been revealed in a concept paper by Union Ministry of Labour revealed during 19-20th September, 2011. The resolutions of WHO and ILO in 2005 and 2006 have called for the elimination of asbestos.

In India, mining of asbestos is technically banned but its import from other countries is yet to be banned. Trade in asbestos (dust & fibers) is also banned.

The dubious designs of the UAL company against the villagers and protesters to protect its hazardous plant at the cost of villagers’ health was condemned by the speakers who spoke at the demonstration. In a dubious move, the UAL has filed case no. 252/2012, 509/2012 and 510/2012 to silence the voice of public interest persons. This appears to be done to trap villagers into concocted cases as part of company’s design to malign the movement of the KBJBJC. The memorandum sought the withdrawal of three fake cases lodged in Mahua Thana, Vaihsali.

Asbestos Virodhi Nagrik Manch, Patna and left and socialist parties participated in the demonstration on January 16, 2012 to express solidarity with the villagers struggle against the asbestos based factory of Utka Asbestos Limited.

Now that the construction of asbestos based factory in Vaishali is all set to be permanently stopped, the issue of three asbestos plants in Bhojpur’s Giddha and Bihiya has come to the forefront where protest has been going onfor more than 2 years. Notably, the Giddha plant is situated behind a B Ed College. The villagers are protesting against this plant. In Bihiya, Tamil Nadu based Ramco Industries is operating two asbestos plants amidst protests from villagers although it has permission for only one. Memorandum has been submitted to the District administration and BSPCB in this regard.

The memorandum to the Chief Minister had demanded white asbestos based plants should be closed in public interest keeping public health in mind and dismissal of fake case registered by Utkal Management.

ToxicsWatch Alliance (TWA) demands that when the State Assembly should be informed of how it was misled by the then Environment Minister. TWA appeals to the Government to stop the hazardous asbestos based plants in Bhojpur as well as it has done in Muzaffarpur and Vaishali.