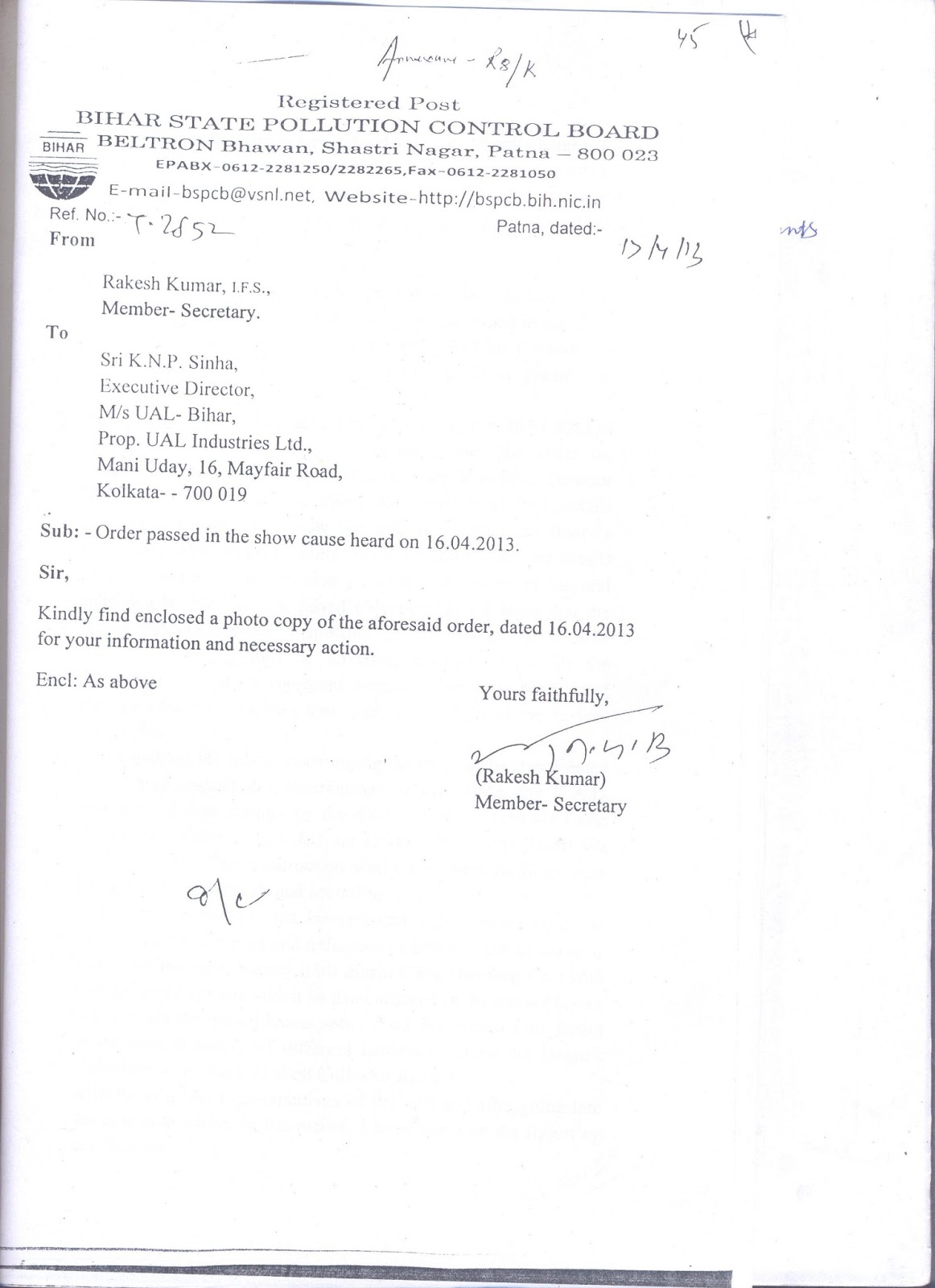 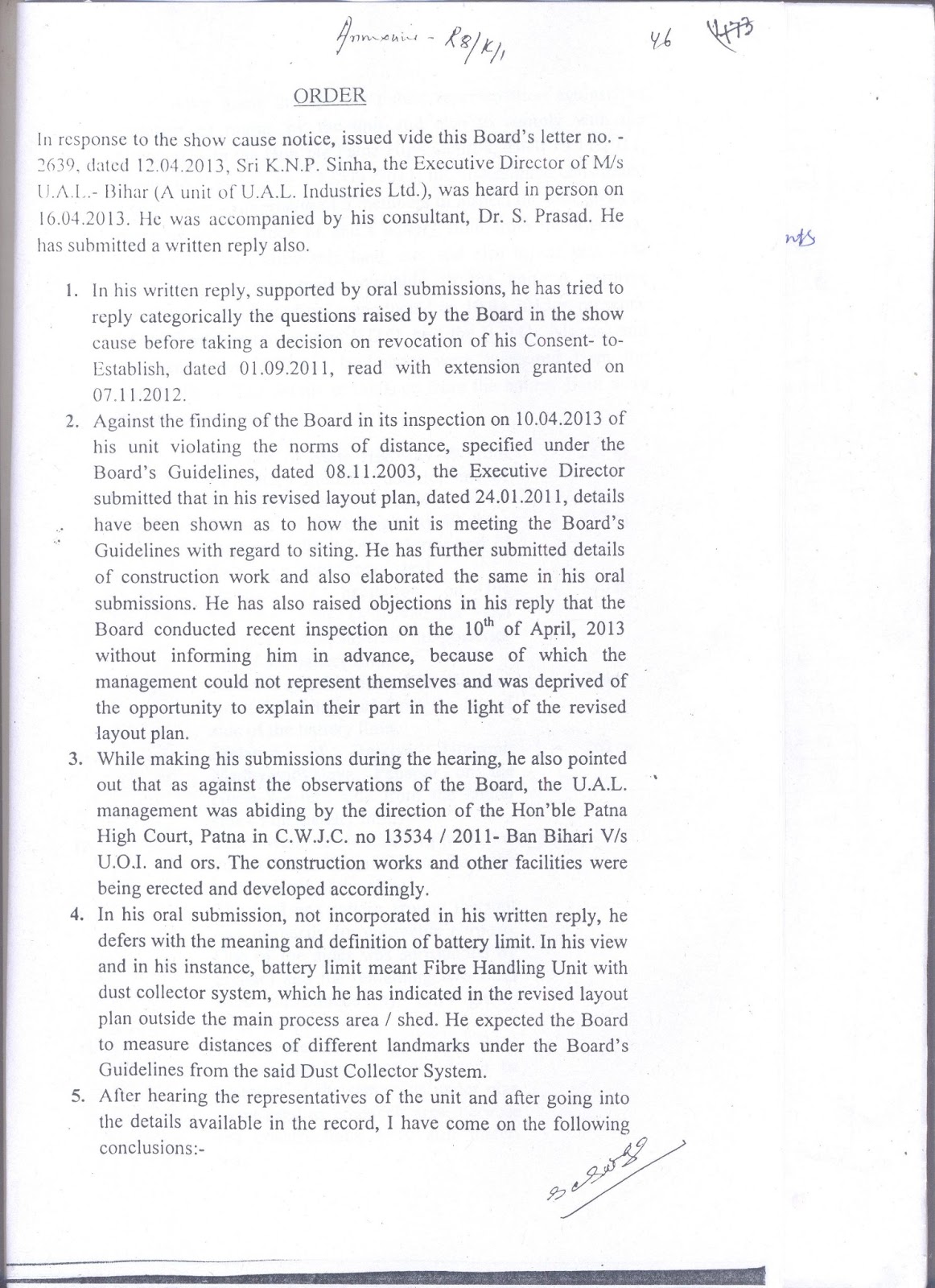 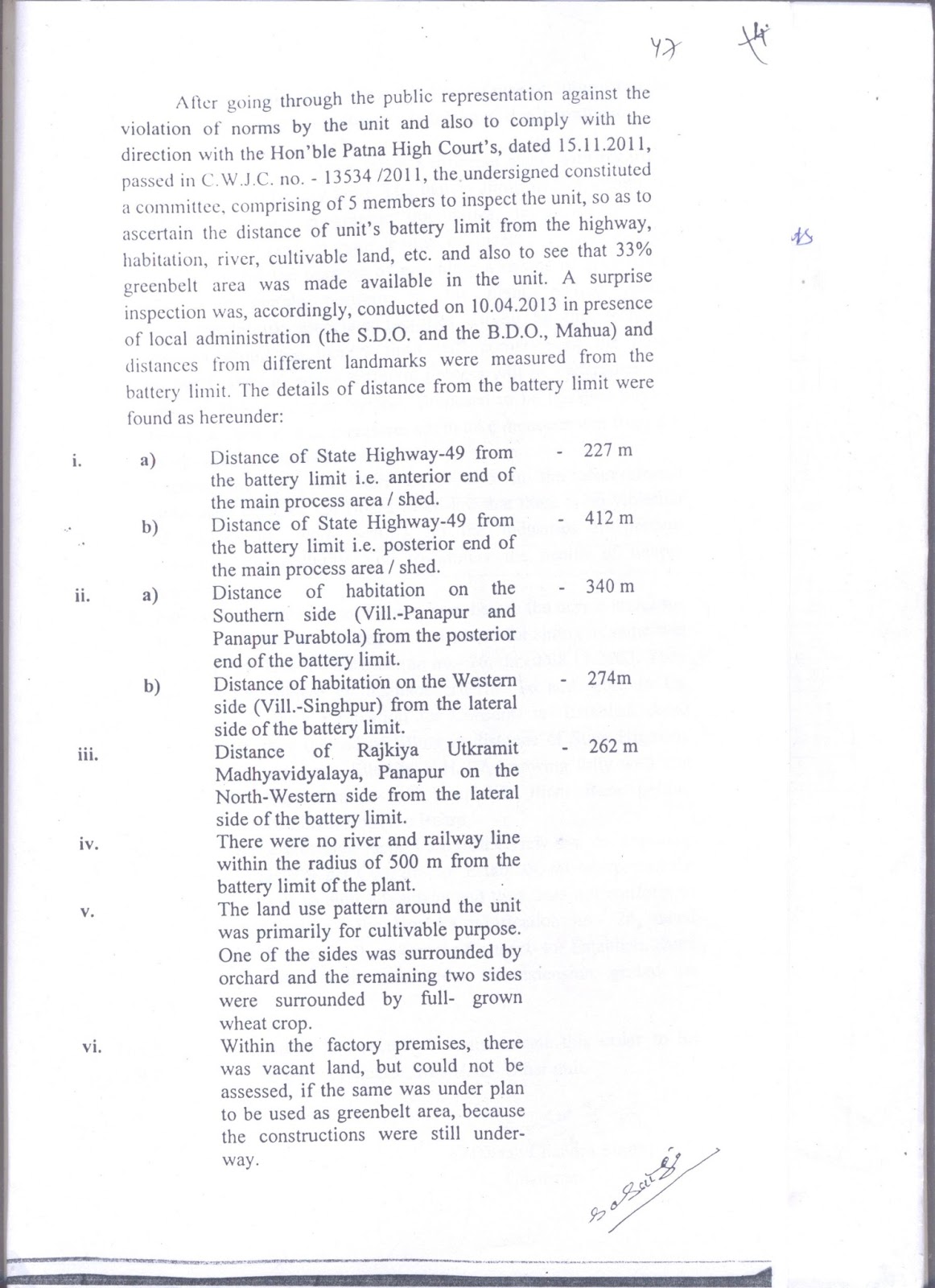 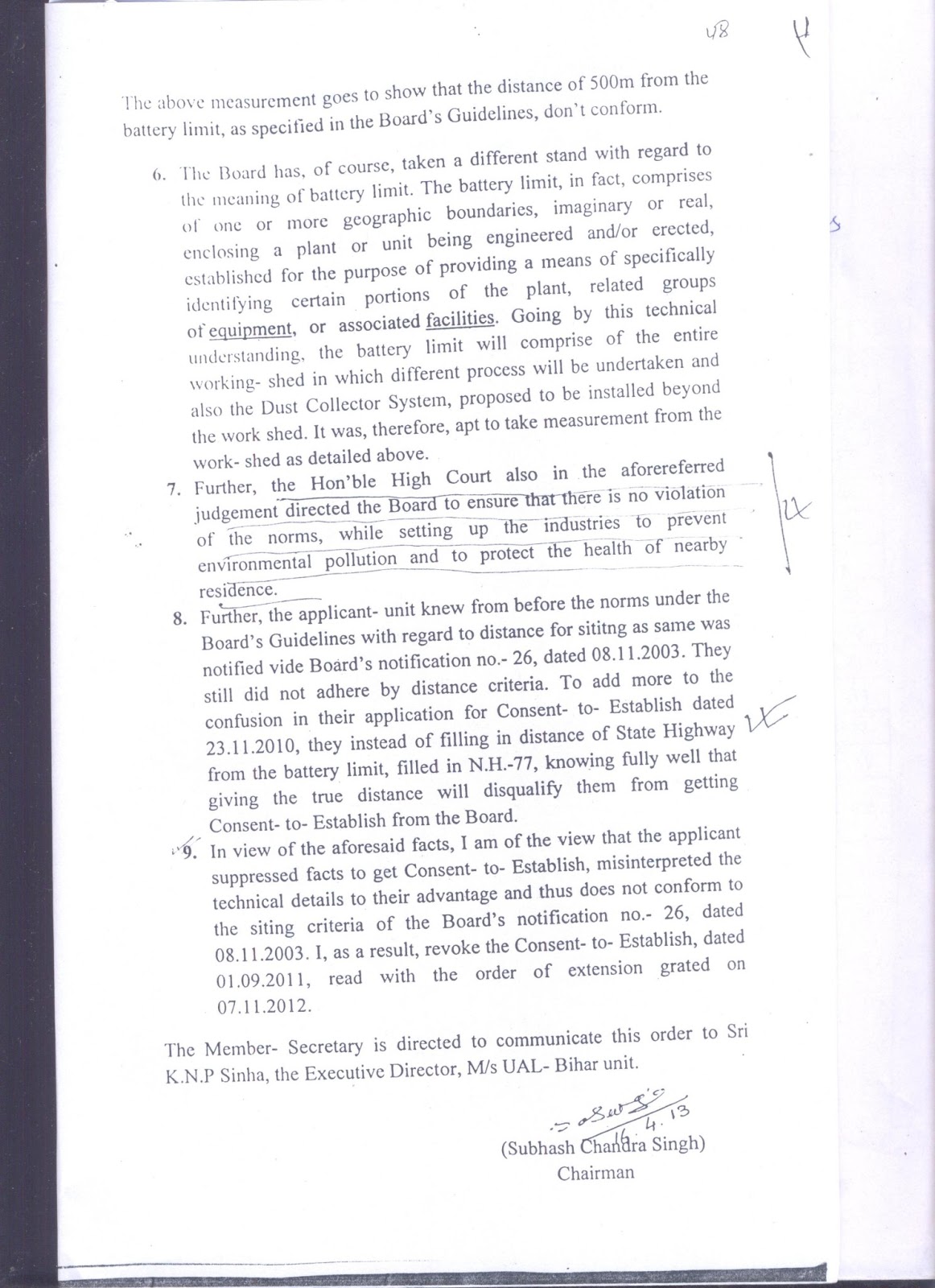 No Objection Certificate of Hazardous Asbestos Plant Cancelled in Bihar

Bhojpur DM undertakes probe of Utkal's Asbestos plant in Giddha, visits factory site to ascertain villagers' grievance  Following bitter resistance of Vaishali villagers to stop cancer causing asbestos factory, Utkal Asbestos company,  ‘No Objection Certificate’ given to company has been cancelled by the Bihar State Pollution Control Board (BSPCB) In response to Bihar Chief Minister’s promise of ‘puncturing’ hazardous asbestos factories in the fertile State. The cancellation order which has been filed in the Patna High Court is enclosed.High Court heard the case Utkal Asbestos Limited (UAL) Industries Ltd. It may be recalled that Justice (Retd) Rekha Kumari, Patna High Court has contended that companies which willfully expose human beings to cancer causing fibers of asbestos must be made criminally liable because right to health is part of right to life in a public lecture on December 24, 2012 at A N Sinha Institute of Social Studies, Patna. Her hand written legal opinion is available with the ToxicsWatch Alliance, which has been campaigning for national ban on lung cancer causing on asbestos products following its ban in over 50 countries.In the meanwhile, Bhojpur District Magistrate is undertaking probe of Utkal's Asbestos plant in Giddha. He led a team of district administration to the hazardous factory site on the complaint of Dharmatma Sharma of Paryawaran Swasthya Suraksha Samiti, Koilwar. This is being done in compliance of orders from the State Governement. DM Bhojpur has announced that he will hold a public hearing on the gate of the factory to hear the gnawing worries of villagers within two months. Few Weeks back a worker was crushed to death in this very factory.     It is noteworthy that Bihar Chief Minister Nitish Kumar met the leaders of ban asbestos movement met the leaders at his residence at 1, Anne Marg in Patna on February 13, 2013. The Chief Minister expressed outrage at the granting of ‘No Objection Certificate’ by Bihar State Pollution Control Board (BSPCB) to hazardous asbestos based factories in fertile agricultural lands. In a remarkable move Bihar Chief Minister had phoned Chairman, BSPCB and fixed an appointment for the villagers of Vaishali for February 14, 2013 and expressed his disapproval for asbestos based factories to him in front of the leaders of the left parties and the villagers’ committee.Struggle of villagers of Vaishali’s Chaksultan Rampur Rajdhari near Panapur in Kanhauli Dhanraj Panchayat in Goraul block against asbestos based factory has reached a decisive phase. Villagers have been protesting against this lung cancer causing hazardous plant under the banner of KBJBJC for more than 2 years. After the villagers Mahadharna of June 14, 2012, the district administration had put a stay on the construction of the factory. When the construction started again on December 16, 2012, the villagers blocked the Mahua-Samastipur road for 9 hours to express their protest against the proposed white asbestos plant of UAL company in their village on June 14.
Cancer causing white asbestos also called chrysotile asbestos is banned in 55 countries. It is noteworthy that "The Government of India is considering the ban on use of chrysotile asbestos in India to protect the workers and the general population against primary and secondary exposure to Chrysotile form of Asbestos." This has been revealed in a concept paper by Union Ministry of Labour revealed during 19-20th September, 2011. The resolutions of WHO and ILO in 2005 and 2006 have called for the elimination of asbestos. In India, mining of asbestos is technically banned but its import from other countries is yet to be banned. Trade in asbestos (dust & fibers) is also banned.The dubious designs of the UAL company against the villagers and protesters to protect its hazardous plant at the cost of villagers’ health was condemned by the speakers who spoke at the demonstration. In a dubious move, the UAL has filed case no. 252/2012, 509/2012 and 510/2012 to silence the voice of public interest persons. This appears to be done to trap villagers into concocted cases as part of company’s design to malign the movement of the KBJBJC. The memorandum sought the withdrawal of three fake cases lodged in Mahua Thana, Vaihsali.Asbestos Virodhi Nagrik Manch, Patna and left and socialist parties participated in the demonstration on January 16, 2012 to express solidarity with the villagers struggle against the asbestos based factory of Utka Asbestos Limited. Now that the construction of asbestos based factory in Vaishali is all set to be permanently stopped, the issue of three asbestos plants in Bhojpur’s Giddha and Bihiya has come to the forefront where protest has been going onfor more than 2 years. Notably, the Giddha plant is situated behind a B Ed College. The villagers are protesting against this plant. In Bihiya, Tamil Nadu based Ramco Industries is operating two asbestos plants amidst protests from villagers although it has permission for only one. Memorandum has been submitted to the District administration and BSPCB in this regard. The memorandum to the Chief Minister had demanded white asbestos based plants should be closed in public interest keeping public health in mind and dismissal of fake case registered by Utkal Management. ToxicsWatch Alliance demands that Chief Minister should establish an Environmental and Occupational Diseases Compensation Fund and urge central government to refrain from approving asbestos based industrial projects. . *For Details*: Gopal Krishna, ToxicsWatch Alliance (TWA), Mb: 9818089660(Delhi), Web:www.toxicswatch.org Ajit Kr Singh, Convener, Khet Bachao Jeevan Bachao Jan Sangharsh Committee(KBJBJC), Vaishali, Mb: 09931669311, E-mail:ajeetsinghpush...@gmail.com Ravindra Prasad Singh, Khet Bachao Jeevan Bachao Jan Sangharsh Committee(KBJBJC), Vaishali, Mb: 8986980751
Share this article :
Labels: Hazardous Industries