Note: Companies Bill, 2012 is supposed to replace the existing Companies Act, 1956. It has been cleared by the Lok Sabha on December 18, 2012. It awaits clearance from the Rajya Sabha.

In 2011, some 238 companies were identified as vanishing companies. A company is deemed to be a
vanishing company, if it is found to have: a) Failed to file returns with Registra r of Companies (ROC) for a period of two years; b) *Failed to file returns with Stock Exchange (SE) for a period of two years (if it continues to be a listed company); c) It is not maintaining its register ed office of the company at the address
notified with the Registrar of Companies/ Stock Exchange; and d) None of its Directors are traceable.
All the conditions mentioned above would have to be satisfied before a listed company is declared as a vanishing company; The conditions mentioned at (a), (c) & (d) would suffice to declare a company as vanishing if such company has been de-listed from the Stock Exchange. 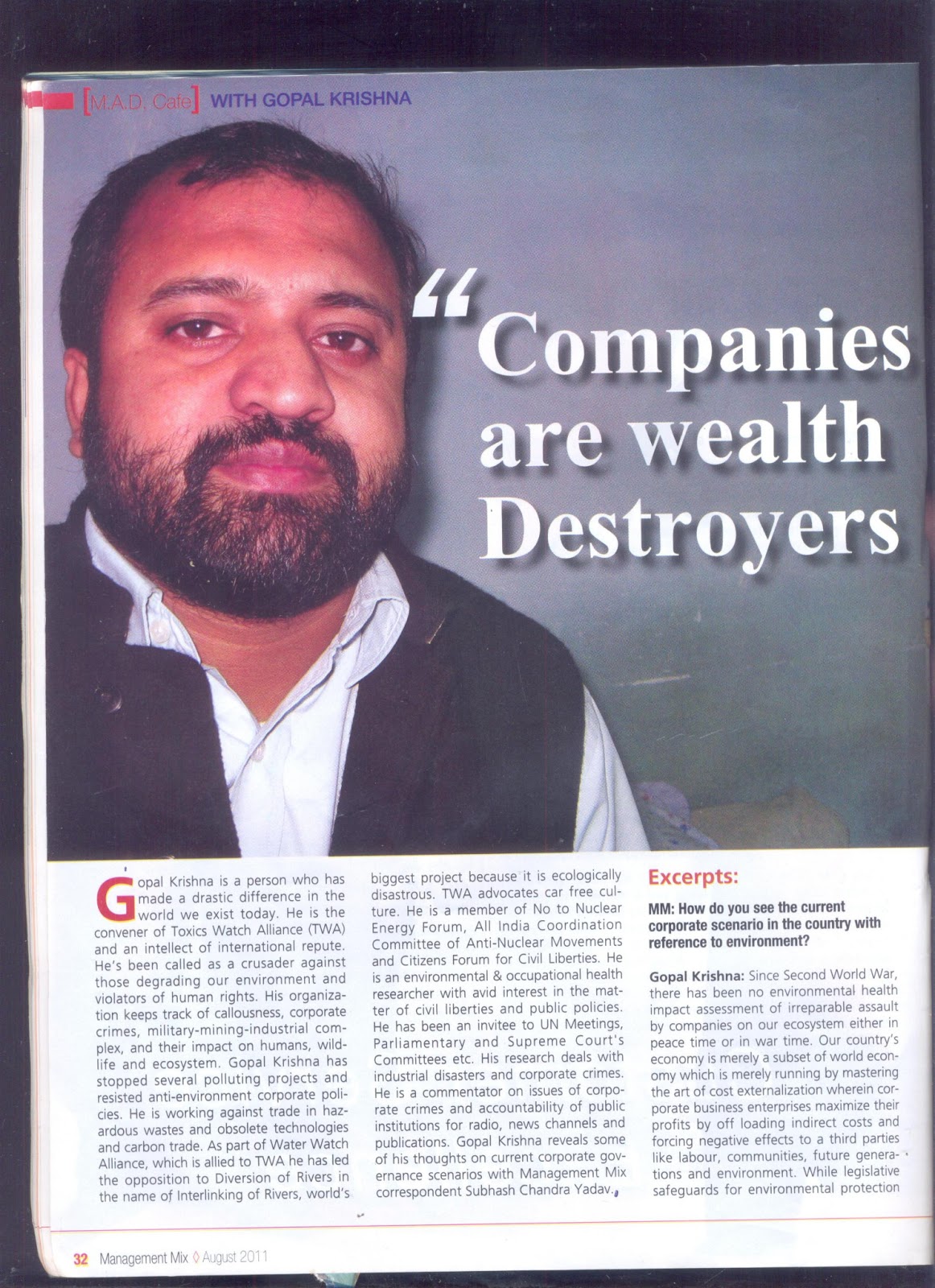 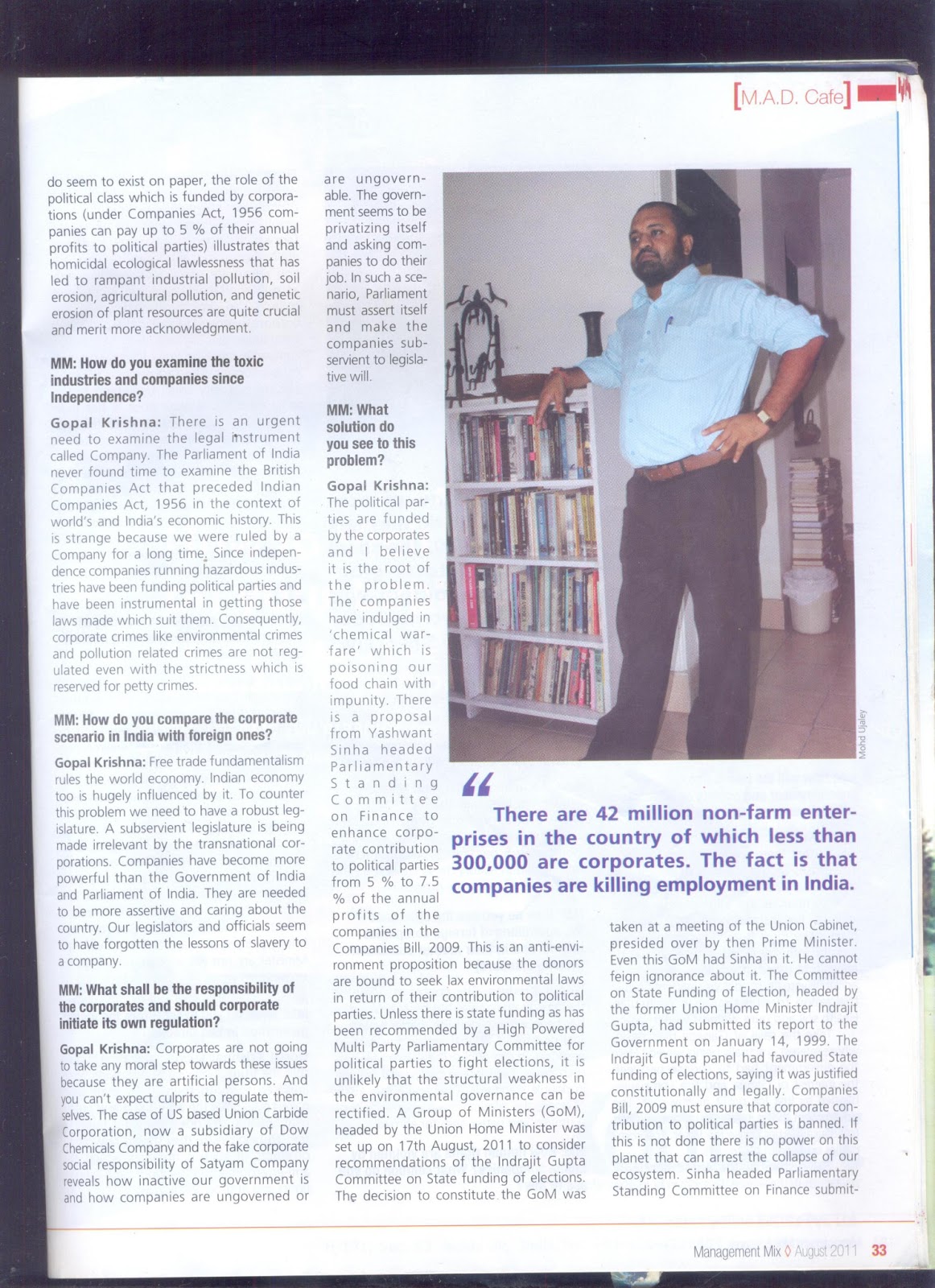 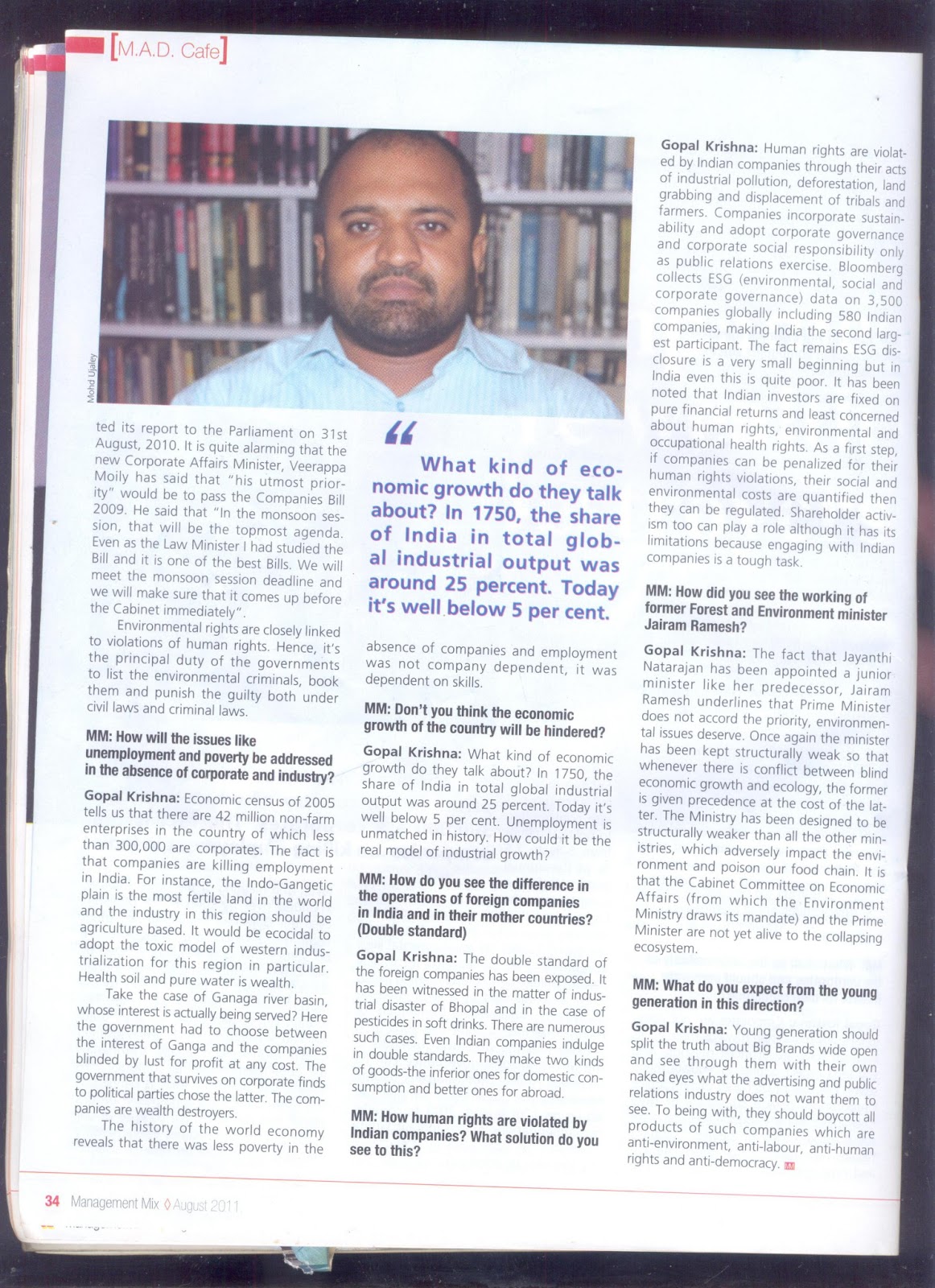 Text of the full interview done in August 2011
Gopal Krishna is a person who has made a drastic difference in the world we exist today. He is the convener of Toxics Watch Alliance (TWA) and an intellect of international repute. He’s been called as a crusader against those degrading our environment and violators of human rights. His organization keeps track of callousness, corporate crimes, military-mining-industrial complex, and their impact on humans, wildlife and ecosystem. Gopal Krishna has stopped several polluting projects and resisted anti-environment corporate policies. He is working against trade in hazardous wastes and obsolete technologies and carbon trade. As part of Water Watch Alliance, which is allied to TWA he has led the opposition to Diversion of Rivers in the name of Interlinking of Rivers, world’s biggest project because it is ecologically disastrous. TWA advocates car free culture. He is a member of No to Nuclear Energy Forum, All India Coordination Committee of Anti-Nuclear Movements and Citizens Forum for Civil Liberties. He is an environmental & occupational health researcher with avid interest in the matter of civil liberties and public policies. He has been an invitee to UN Meetings, Parliamentary and Supreme Court's Committees etc. His research deals with industrial disasters and corporate crimes. He is a commentator on issues of corporate crimes and accountability of public institutions for radio, news channels and publications.  Gopal Krishna reveals some of his thoughts on current corporate governance scenarios with Management Mix correspondent Subhash Chandra Yadav.

MM: How do you see the current corporate scenario in the country with reference to environment?
Gopal Krishna: Since Second World War, there has been no environmental health impact assessment of irreparable assault by companies on our ecosystem either in peace time or in war time. Our country’s economy is merely a subset of world economy which is merely running by mastering the art of cost externalization wherein corporate business enterprises maximize their profits by off loading indirect costs and forcing negative effects to a third parties like labour, communities, future generations and environment.  While legislative safeguards for environmental protection do seem to exist on paper, the role of the political class which is funded by corporations (under Companies Act, 1956 companies can pay up to 5 % of their annual profits to political parties) illustrates that homicidal ecological lawlessness that has led to rampant industrial pollution, soil erosion, agricultural pollution, and genetic erosion of plant resources are quite crucial and merit more acknowledgment.

MM: How do you examine the toxic industries and companies since Independence?
Gopal Krishna:There is an urgent need to examine the legal instrument called Company. The Parliament of India never found time to examine the British Companies Act that preceded Indian Companies Act, 1956 in the context of world’s and India’s economic history. This is strange because we were ruled by a Company for a long time.  Since independence companies running hazardous industries have been funding political parties and have been instrumental in getting those laws made which suit them.  Consequently, corporate crimes like environmental crimes and pollution related crimes are not regulated even with the strictness which is reserved for petty crimes.

MM: How do you compare the corporate scenario in India with foreign ones?
Gopal Krishna: Free trade fundamentalism rules the world economy. Indian economy too is hugely influenced by it although constitutionally, we are a socialist country.  To counter this problem we need to have a robust legislature. A subservient legislature is being made irrelevant by the transnational corporations. These companies have become more powerful than the Government of India and Parliament of India. They are needed to be more assertive and caring about the country. Our legislators and officials seem to have forgotten the lessons of slavery to a company.

MM: What shall be the responsibility of the corporates and should corporate initiate its own regulation?
Gopal Krishna: It is said that laws are the artifacts of corporations. Corporates are not going to take any moral step towards these issues because they are artificial persons.  And you can’t expect culprits to regulate themselves. The case of US based Union Carbide Corporation, now a subsidiary of Dow Chemicals Company and the fake corporate social responsibility of Satyam Company reveals how inactive out government is and how companies are ungoverned or are ungovernable. The government seems to be privatizing itself and asking companies to do their job. In such a scenario, Parliament must assert itself and make the companies subservient to legislative will.

MM: What solution do you see to this problem?
Gopal Krishna: The political parties are funded by the corporates and I believe it is the root of the problem. The companies have indulged in ‘chemical warfare’ which is poisoning our food chain with impunity. There is a proposal from Yashwant Sinha headed Parliamentary Standing Committee on Finance to enhance corporate contribution to political parties from 5 % to 7.5 % of the annual profits of the companies in the Companies Bill, 2009. This is an anti-environment proposition because the donors are bound to seek lax environmental laws in return of their contribution to political parties. Unless there is state funding as has been recommended by a High Powered Multi Party Parliamentary Committee for political parties to fight elections, it is unlikely that the structural weakness in the environmental governance can be rectified.

A Group of Ministers (GoM), headed by the Union Home Minister was set up on 17th August, 2011 to consider recommendations of the Indrajit Gupta Committee on State funding of elections. The decision to constitute the GoM was taken at a meeting of the Union Cabinet, presided over by then Prime Minister. Even this GoM had Sinha in it. He cannot feign ignorance about it. The Committee on State Funding of Election, headed by the former Union Home Minister Indrajit Gupta, had submitted its report to the Government on January 14, 1999.

The Indrajit Gupta panel had favoured State funding of elections, saying it was justified constitutionally and legally. Companies Bill, 2009 must ensure that corporate contribution to political parties is banned. If this is not done there is no power on this planet that can arrest the collapse of our ecosystem. Sinha headed Parliamentary Standing Committee on Finance submitted its report to the Parliament on 31st August, 2010. It is quite alarming that the new Corporate Affairs Minister, Veerappa Moily has said that “his utmost priority” would be to pass the Companies Bill 2009. He said that “In the monsoon session, that will be the top most agenda.

Even as the Law Minister I had studied the Bill and it is one of the best Bills. We will meet the monsoon session deadline and we will make sure that it comes up before the Cabinet immediately”.

If this Bill is passed without banning corporate funding of political parties, it would be one of the saddest days for the Indian Parliament and India’s environment.

Environmental rights are closely linked to violations of human rights. Hence, it’s the principal duty of the governments to list the environmental criminals, book them and punish the guilty both under civil laws and criminal laws.

MM: How will the issues like unemployment and poverty be addressed in the absence of corporate and industry?
Gopalkrishna: Economic census of 2005 tells us that there are 42 million non-farm enterprises in the country of which less than 300,000 are corporates. The fact is that companies are killing employment in India. For instance, the Indo-Gangetic plain is the most fertile land in the world and the industry in this region should be agriculture based. It would be ecocidal to adopt the toxic model of western industrialization for this region in particular. What is being done is the lands are turning arid and water bodies are being polluted by the companies. Health soil and pure water is wealth.

Take the case of Ganaga river basin, whose interest is actually being served? Here the government had to choose between the interest of Ganga and the companies blinded by lust for profit at any cost. The government that survives on corporate finds to political parties chose the latter.  The companies are wealth destroyers.
The history of the world economy reveals that there was less poverty in the absence of companies and employment was not company dependent, it was dependent on skills.

MM: Don’t you think the economic growth of the country will be hindered?
Gopal Krishna: What kind of economic growth do they talk about? In 1750, the share of India in total global industrial output was around 25 percent. Today it’s well below 5 per cent. Unemployment is unmatched in history. How could it be the real model of industrial growth?

MM: How human rights are violated by Indian companies? What solution do you see to this?
Gopal Krishna: Human rights are violated by Indian companies through their acts of industrial pollution, deforestation, land grabbing and displacement of tribals and farmers. Companies incorporate sustainability and adopt corporate governance and corporate social responsibility only as public relations exercise. Bloomberg collects ESG (environmental, social and corporate governance) data on 3,500 companies globally including 580 Indian companies, making India the second largest participant. The fact remains ESG disclosure is a very small beginning but in India even this is quite poor. It has been noted that Indian investors are fixed on pure financial returns and least concerned about human rights, environmental and occupational health rights.  As a first step, if companies can be penalized for their human rights violations, their social and environmental costs are quantified then they can be regulated. Shareholder activism too can play a role although it has its limitations because engaging with Indian companies is a tough task.

MM: How did you see the working of former Forest and Environment minister Jairam Ramesh?
Gopal Krishna: The fact that Jayanthi Natarajan has been appointed a junior minister like her predecessor, Jairam Ramesh underlines that Prime Minister does not accord the priority, environmental issues deserve. Once again the minister has been kept structurally weak so that whenever there is conflict between blind economic growth and ecology, the former is given precedence at the cost of the latter. The Ministry has been designed to be structurally weaker than all the other ministries, which adversely impact the environment and poison our food chain. It is that the Cabinet Committee on Economic Affairs (from which the Environment Ministry draws its mandate) and the Prime Minister are not yet alive to the collapsing ecosystem. Jairam Ramesh is now a member of Cabinet Committee on Economic Affairs. Hopefully, he would be able to do all that he could not do as a junior minister to protect the environment.

MM: What do you expect from the young generation in this direction?
Gopal Krishna: Young generation should split the truth about Big Brands wide open and see through them with their own naked eyes what the advertising and public relations industry does not want them to see.  To begin with, they should boycott all products of such companies which are anti-environment, anti-labour, anti-human rights and anti-democracy.