World Bank and Asian Development Bank documents underline the carcinogenic risks of asbestos fibers
Patna/New Delhi, April 10, 2013: In his reply in the State Assembly, Sushil Kumar Modi, Bihar Minister of Environment & Forests has been misled into saying “Hon’ble Supreme Court while dismissingthe Writ Petition (Civil) No. 260/2004 filed to get asbestos and products made from it, held that there is no available credible study on the basis of which direct relationship of cancer disease with use of asbestos can be proved.” This reply in Hindi is attached along with its English translation.
Contrary to what the Bihar Environment Minister said, Supreme Court in its judgment in the above mentioned case, dated January 21, 2011at paragraph 14 reads as under:
“14. In the matter relating to secondary exposure of workers to asbestos, though the grounds have been taken in the Writ Petition without any factual basis, again in the Rejoinder filed to the counter affidavit of respondent No.37, this issue has been raised by the petitioner in detail. In the earlier judgment of this Court in the case of Consumer Education and Research Centre (supra), hazards arising out of primary use of asbestos were primarily dealt with, but certainly secondary exposure also needs to be examined by the Court. In that judgment, the Court had noticed that it would, thus, be clear that diseases occurred wherever the exposure to the toxic or carcinogenic agent occurs, regardless of the country, type of industry, job title, job assignment or location of exposure. The diseases will follow the trail of the exposure and extend the chain of the carcinogenic risk beyond the work place. In that judgment, the Court had also directed that a review by the Union and the States shall be made after every ten years and also as and when the ILO gives directions in this behalf consistent with its recommendations or conventions. Admittedly, 15 years has expired since the issuance of the directions by this Court. The ILO also made certain specific directions vide its resolution of 2006 adopted in the 95th session of the International Labour Conference. It introduced a ban on all mining, manufacture, recycling and use of all forms of asbestos. As already noticed, serious doubts have been raised as to whether `controlled use' can be effectively implemented even with regard to secondary exposure. These are circumstances which fully require the concerned quarters/authorities in the Government of India as well as the State Governments to examine/review the matter in accordance with law, objectively, to achieve the greater health care of the poor strata of the country who are directly or indirectly engaged in mining or manufacturing activities of asbestos and/or allied products.” 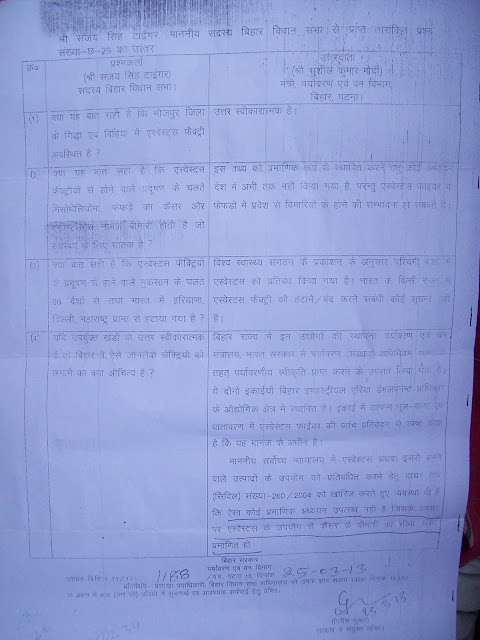 The Supreme Court in its judgment dated January 21, 2011 in Writ Petition (Civil) No.260 of 2004 referred to its directions of January 27, 1995 in the Writ Petition (Civil) No. 206 of 1986 that are required to be strictly adhered to including fresh International Labour Organisation (ILO) resolution on Asbestos dated June 14, 2006.
It is clear that both the Supreme Court and Court have taken note of the resolution of WHO and ILO which seek elimination of all forms of asbestos.
Bihar Environment Minister was asked: Is it true that due to pollution happening due to asbestos factories, diseases like Mesothelioma, Asbestosis, lung cancer occur which is hazardous to health?
He replied, “So far there has been no study in the country to establish this fact in a credible manner.”
Bihar Environment Minister should note that Smt Sushma Swaraj has informed the Parliament, “…the Indian Council of Medical Research (ICMR) is of the view that long term exposure to any type of asbestos can lead to development of asbestosis, lung cancer and Mesothelioma” and referred to the need for complying with “ILO directions” as per Supreme Court order on August 13, 2003.
Bihar Environment Minister should note that Environment Impact Assessment (EIA) reports also categorically admit to the relationship between exposure to asbestos and diseases like mesothelioma, asbestosis and lung cancer.
Union Minister of Health and Family Welfare, Dr. C.P. Thakur informed the Parliament that  “Some of the countries in the world like France, U.K., Sweden, Norway, Denmark, Netherland, Finland, Germany, Italy, Belgium, Austria, Poland and Saudi Arabia have banned the use of Asbestos” on August 22, 2001.
Bihar Environment Minister, a member of Bihar Legislative Council (BLC) feigns ignorance about the views of Chairman, BLC, Dr Thakur and Smt Sushma Swaraj regarding asbestos hazards.
The government agencies like Directorate General, Factory Advice Service and Labour Institutes (DGFASLI) took note of Prevalence of Asbestosis and Related Disorders in a Asbestos Fiber Processing Unit in West Bengal as early as in 1996. Reference: Prevalence of Asbestosis and Related Disorders in a Asbestos Fiber Processing Unit in West Bengal. http://www.dgfasli.nic.in/newsletter/jan_march_96.pdf
It must be noted that Secretary (Labour), Bihar was a member of a 11 member Working Group of a Planning Commission to prepare the Xth Five Year Plan on Occupational Safety and Health at the workplace under the Chairmanship of Vinod  Vaish, Secretary, Ministry of Labour, Government of India vide their order no. M-13015/9/2000-LEM/LP dated 27.04.2001. In its 159 page report dated September 2001, the Working Group noted that “The workers are also exposed to a host of hazardous substances, which have a potential to cause serious occupational diseases such as asbestosis…” It has recorded that various studies conducted by the Central Labour Institute have revealed substantial prevalence of occupational health disorders amongst the workers such as Asbestosis. The prevalence rate for Asbestosis was reported to be 7.25%. It has been acknowledged that “At the same time the number of occupational diseases reported is very meager…This makes it evident that early identification of occupational diseases is required. It has recommended that “To meet these requirements, measures are needed for diagnostic facilities and appropriate training in the field of occupational health. Occupational health hazards and diseases to the workmen employed in asbestos industries are of great concern to the industries, Govt. and the public. The Honorable Supreme Court of India in its judgement dated 27th January, 1995 relating to the Public Interest Litigation No.206 of 1986 had given several directions concerning the protective measures to be taken against the hazards of exposure to asbestos at workplaces such as mining and manufacturing activities. In the light of Supreme Court directives, it is proposed to launch a comprehensive programme for the protection of the health of the workers engaged in hazardous industries with adequate mechanisms for monitoring of work environment and diagnosis and control of disease.”
Union Ministry of Labour has revealed that that the “Government of India is considering the ban on use of chrysotile asbestos in India to protect the workers and the general population against primary and secondary exposure to Chrysotile form of Asbestos" at page no. 28 of its concept paper at the two-day 5th India-EU Joint Seminar on “Occupational Safety and Health” during 19-20 September, 2011.
It is noteworthy that Dow Chemicals Company has set aside $2.2 billion in compensation fund to address future asbestos-related liabilities arising out of acquisition of Union Carbide Corporation and its Indian investments in 1999. Many manufacturers of asbestos-containing products have gone bankrupt in USA as a result of asbestos litigation.
Even World Bank has a policy against asbestos since 1991. "The Bank increasingly prefers to avoid financing asbestos use...Thus, at any mention of asbestos in Bank-assisted projects, the Task Manager needs to exercise special care." (World Bank’s Environmental Assessment Sourcebook, Vol. 3, World Bank Technical Paper #154) The guideline says: “The onus is on proponents to show the unavailability of alternatives.”
A 229 page report of Asian Development Bank (ADB) titled “India: Preparing the Bihar Urban Development Project—Environmental Impact Assessment for Bhagalpur Water Supply”, Project Number: 7106 prepared for Urban Development and Housing Department, Government of Bihar in June 2011 at page no. 94 deals with Asbestos Cement (AC) Pipes. It reads: “An additional, particularly acute health risk presented by this subproject derives from the fact that, the existing water supply system may comprises partially AC pipes, so there is a risk of contact with carcinogenic material if these pipes are uncovered in the course of the work.”
ToxicsWatch Alliance demands that Government of Bihar should also set up a compensation fund to provide compensation to the asbestos victims of past exposure by making asbestos based companies liable for knowingly exposing workers, consumers and citizens to asbestos fibers.
Clearly, there is a compelling logic for Bihar’s Ministry of Environment & Forests to revise its views which are brining disrepute to State especially among world’s scientific and medical community.
For Details: Gopal Krishna, Convener, ToxicsWatch Alliance (TWA),
Web: www.toxicswatch.org, E-mail: gopalkrishna1715@gmail.com, Mb: 9818089660
Ajit Kr Singh, Convener, Khet Bachao Jeevan Bachao Jan Sangharsh Committee (KBJBJC), Vaishali, Mb: 09931669311, E-mail:ajeetsinghpushkar@gmail.com Ravindra Prasad Singh, KBJBJC), Vaishali, Mb: 8986980751

(2)     Is it true that due to pollution happening due to        So far there has been no study in the
asbestos factories diseases like Mesothelioma,          country to establish this fact in a  credible
Asbestosis, lung cancer occur which is hazardous      manner
to health?