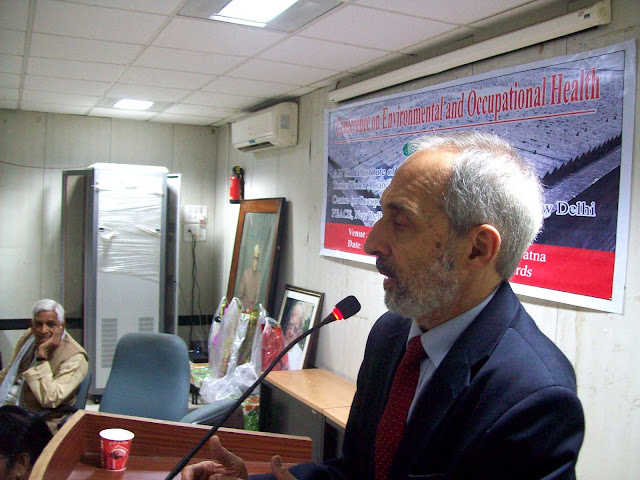 Dr Barry Castleman disclosed why asbestos-related lung cancer, mesothelioma and asbestosis resulting from occupational exposures “can only be prevented by adopting alternatives ofasbestos. It is estimated that several thousands of deaths can be attributed annually to exposure to asbestos in the living environment.” Dr Castleman is a fellow Collegium Ramazzini, USA and author, Medical & Legal Aspects of Asbestos. He said, “Asbestoscompanies indulging in corporate crimes”. 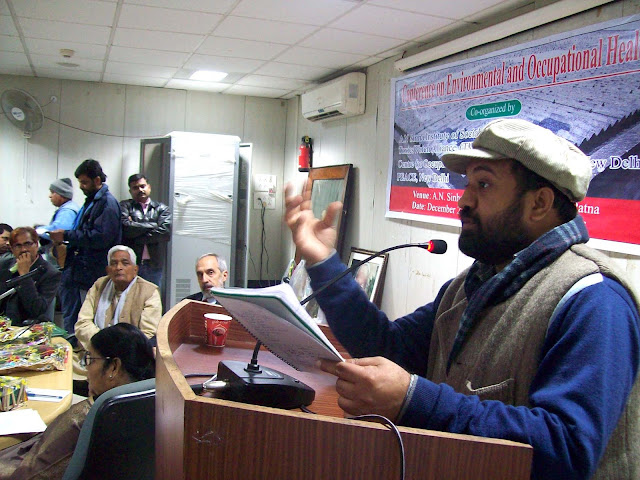 Gopal Krishna of ToxicsWatch Alliance (TWA) making a case for Bihar Government and Central Government to ban asbestos of all kinds and ensure legal and medical remedy for the past, present and future victims of asbestos exposure in the presence of Justice (Retd) Rekha Kumari, Patna High Court, 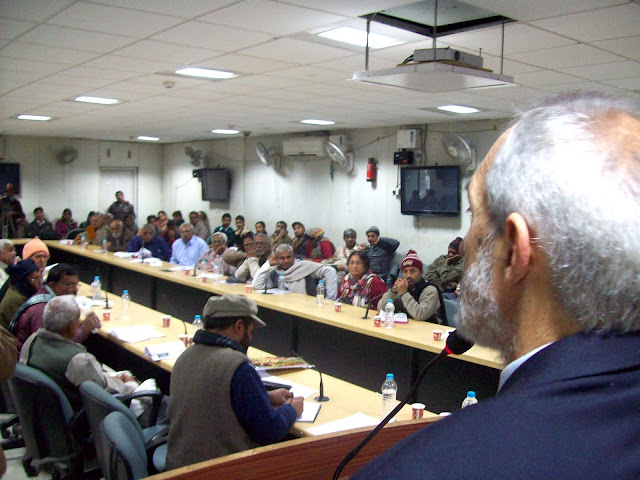 Dr Barry Castleman addressing the conference highlighting the impossibility of safe and controlled use of asbestos. 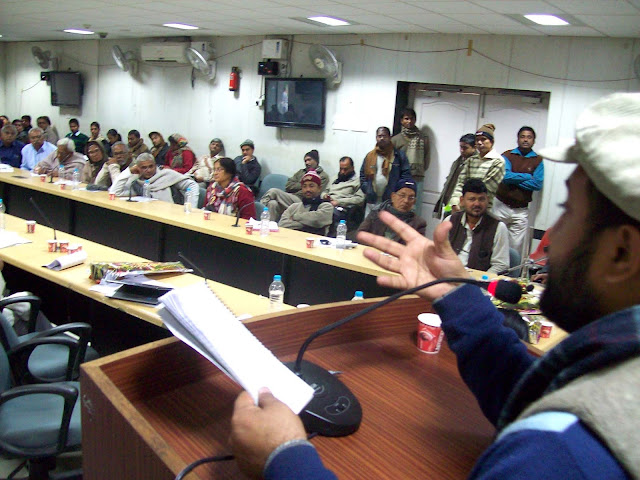 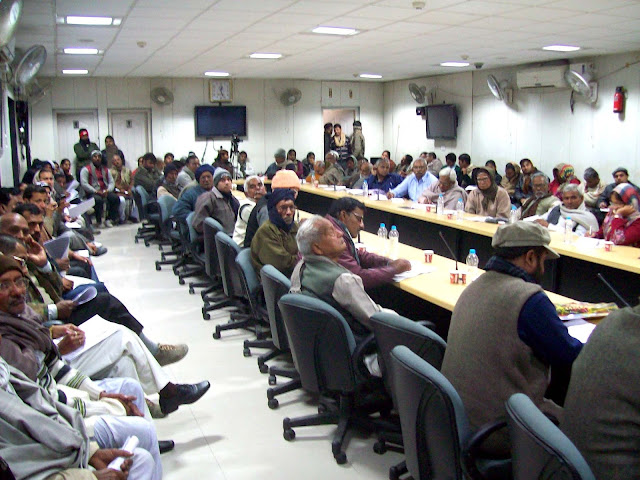 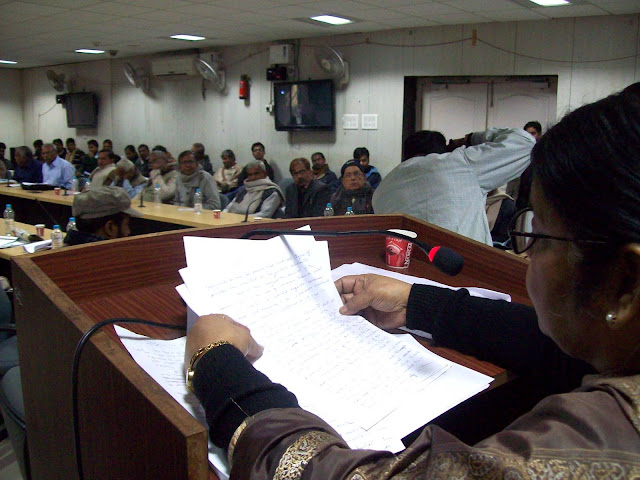 Justice (Retd) Rekha Kumari, Patna High Court contended that companies which willfully expose human beings to cancer causing fibers of asbestos must be made criminally liable because right to health is part of right to life. 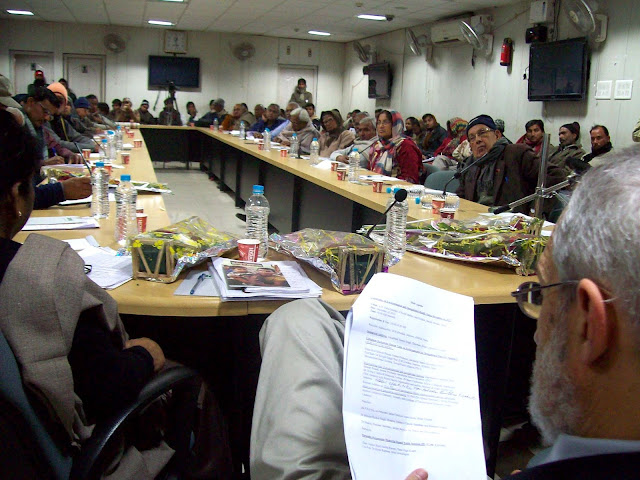 Delegates present at the Conference on Environmental & Occupational Health, Patna 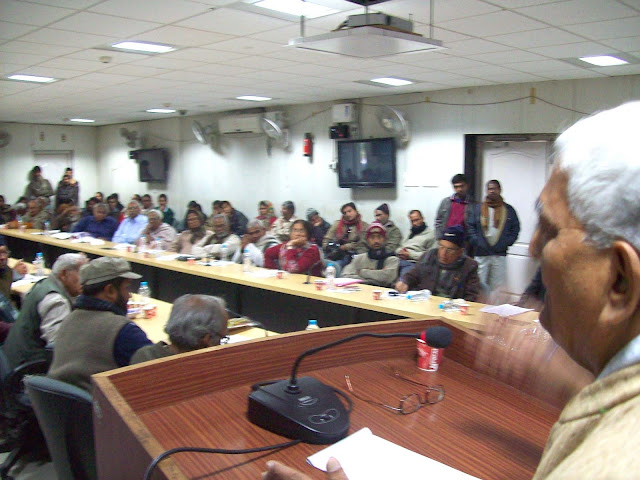 Prof Ishwari Prasad, former Professor, Jawaharlal Nehru University (JNU) argued against the externalization of health costs due to hazardous industries like asbestos industry. We cannot wait for studies and counting of dead bodies for government to act. The global evidence is incontrovertible.

Seeking environmental, occupational health infrastructure and
Prohibition on all forms of asbestos based products

Taking cognizance of the human rights violation involved in exposing people to killer asbestos
fibers and how even if few asbestos fibre reach the right places, it causes irreversible damage -
leading to asbestosis, lung cancer or mesothelioma;

Asserting the need for inclusion of environmental and occupational health study in the medical education;

Appreciating Union Ministry of Labour revelation that the “Government of India is considering the ban on use of chrysotile asbestos in India to protect the workers and the general population against primary and secondary exposure to Chrysotile form of Asbestos" at page no. 28 of its concept paper at the two-day 5th India-EU Joint Seminar on “Occupational Safety and Health” during 19-20 September, 2011.
Recalling the Supreme Court’s order of 1995 reiterated in 2012  seeking the Union and state governments in the Consumer Education and Research Centre (CERC) vs Union of India case to examine/review the matter with regard to asbestos exposure in tune with the resolution of the International Labour Organisation (ILO);

Awaiting the recommendations of Union Labour Ministry’s Advisory Committee to implement Supreme Court order issued 15 years ago since ILO has also made certain specific directions vide its Resolution of 2006 introducing a ban on all mining, manufacture, recycling and use of all forms of asbestos.

Endorsing World Health Organisation’s resolution of 2005 seeking elimination of all forms of asbestos;

Asserting the fact that so far some 55 countries have banned all forms of asbestos, and are
already using alternative building materials;

Underlining that the International Agency for Research on Cancer (IARC) reconfirmed
that all commercial asbestos fibers - including chrysotile, the most commercially used form of
asbestos - cause lung cancer and mesothelioma. In addition, IARC newly confirmed that there is
sufficient evidence that asbestos causes ovarian cancer and reconfirmed asbestos causes laryngeal cancer;

Reminding the Government of India and State Government that there is incontrovertible evidence which creates a compelling logic for making India asbestos free;

Expressing solidarity with struggles ALL ACROSS THE NATION against Asbestos Factories

All public institutions must disclose the data regarding occupational diseases and occupational history, it should be mandatory for all public and private hospitals/ dispensaries and all medical practitioners.

Permanently stop the Asbestos factories at Mahua, Vaishali , Bhojpur and other parts of Bihar

We recommend that the Government should start efforts to decontaminate asbestos laden
buildings including schools, hospitals, railways and others

We urge  the  Governments at all level to adopt policy to not use asbestos containing building materials in Public building and adequately compensate the victims of asbestos-related diseases,
create a database of asbestos exposed people and victims as well as besides providing legal and
possible medical relief and taking preventive measures. We call on the government to create a
mesothelioma registry and a building registry of those facilities which have asbestos.

Adopted at Patna on December 24, 2012 at the Conference on Environmental andOccupational Health which was inaugurated by Awadesh Narain Singh, Chairman, Bihar Legislative
Council.
Share this article :

Wow ! Really ,This is a wonderful post. I enjoyed the information lot. I will bookmark this page. Thanks for sharing this important information. Thanks.