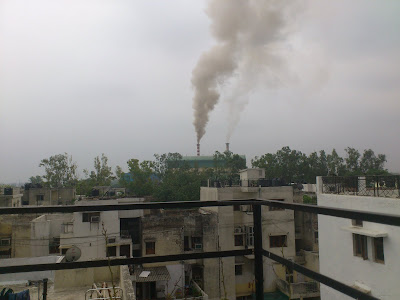 Amidst bitter protest against Okhla Incinerator, construction of incinerator plants at Narela-Bawana & Ghazipur underway
New Delhi: ToxicsWatch Alliance (TWA) gave a presentation to Indian Association for Air Pollution Control (IAAPC) on ‘Landfills in the sky’ outlining the disastrous public health consequences of waste to energy incinerators in Delhi’s Okhla, Narela-Bawana and Gazipur on August 4 at the meeting of their executive/managing committee. The presentation is attached.

Notably, a related matter has been listed for hearing in the Supreme Court on October 1, 2012 in the Writ Petition (Civil) No. 888 of 1996. Delhi High Court is seized with the petition of Sukhdev Vihar residents against the Okhla incinerator plant since 2009. It heard the matter on July 3, 2012. The next hearing is on October 3, 2012.

In its presentation to IAAPC, TWA submitted that the burning of 2050 Metric Ton of municipal waste at Okhla by Jindal Ecopolis company, 4000 Metric Ton project at Narela-Bawana by Ramky company and 1300 Metric Ton project at Ghazipur by GMR company. Delhi generates approximately 22500 Ton of municipal solid waste daily, out of which 7050 Ton is sought to burnt to create landfills for toxic cocktail of contaminants in the sky. All the three projects are using unapproved technologies. The probe of Okhla waste to energy incinerator plant by Central Pollution Control Board (CPCB) revealed that there is Industrial Disaster Management Plan has not been prepared and the company is using a Chinese technology although environmental clearance was taken for Refuse Derived Fuel technology in a clear case of environmental lawlessness in the heart of the national capital with impunity. CPCB report and its critique is attached.

TWA site visited has revealed that residents and villagers are protesting against the proposed Dioxins emitting plant. The plant at Okhla is situated not only in the proximity of New Friends Colony, Maharani Bagh, Sukhdev Vihar and the business district Nehru Place - but also several prominent institutions, including hospitals like Apollo, Escorts and Holy Family. The proposed plant at Narela Bawana is in the vicinity of Sannaut village. Even Gazipur site is surrounded by residential colonies.

In its presentation, TWA submitted that every time something is burnt, it’s a backward journey to the beginning of the linear society (extraction- manufacture-consumption-waste). One quarter of the mass of the waste that is burned is ash.

By municipal/household waste, the most toxic substances are created than any chemical laboratory can make it. These include: polyhalogenated dibenzo para dioxins and furans (PCDDs, PCDFs, PBDDs, PBDFs etc) called "dioxins" for short. There are literally thousands of these substances. Incineration releases many toxic metals like lead, cadmium, mercury, chromium etc go into the air, at best they are captured in the fly ash in the air pollution control devices.

For every four tons of waste burned one gets at least one ton of ash: 90% is called bottom ash (that is the ash collected under the furnace) and 10% is the very toxic fly ash. No one knows as to where do the ash from the waste incinerator that is plaguing the national capital due to financial incentives of Farooq Abdullah’s Union Ministry of New and Renewable Energy (MNRE) gets disposed off. MNRE has a waste to energy policy that distorts waste management by promoting incinerator technologies through subsidy of 1.5 crore/MW of waste based power in violation of the Supreme Court Order of May 15, 2007. MNRE’s driving concern is energy at any human or environmental cost.

TWA underlined the threats from ultrafine particulate matter and nanoparticles which remains beyond regulation which has failed to factor in nanotoxicology. These particles have exquisite biological properties which are very worrying. They are so tiny that they can cross the lung membrane and enter the bloodstream. Once there they can enter every tissue in the body including the brain.

In most countries the particles regulated are 10 microns and above. In some countries they regulate particles at 2.5 microns. But neither standard comes closer to monitoring nanoparticles.

TWA cited a Statement of Evidence -Particulate Emissions and Health from Dr. Vyvyan Howard from Northern Ireland which is the most up to date review of the issue of nanoparticles and incineration available. Before any new incinerator is built in Delhi, or anywhere else for that matter, government officials should force the project proponent director to produce a scientific response to the key questions of nano toxicity posed in this paper.

If they cannot do so, then clearly building such a plant is taking a reckless gamble with the public's health. Such a gamble cannot be justified on either economic or environmental grounds, both local and global.

Pollution is the most recognized and best-studied problem of incineration. Despite intensive scrutiny over many years, however, much remains unknown about releases of pollutants from incinerators. Waste burners produce hundreds of distinct hazardous byproducts, and only a handful of them have been studied thoroughly. Hundreds more may remain unidentified.

Dioxins are the most notorious pollutant associated with incinerators. They cause a wide range of health problems, including cancer, immune system damage, reproductive and developmental problems. Dioxins biomagnify, meaning that they are passed up the food chain from prey to predator, concentrating in meat and dairy products, and, ultimately, in humans.

TWA recalled that Dioxins became famous as the culprit in such public health disasters as Love Canal, Seveso, Times Beach, and Agent Orange, in which populations were exposed to large quantities of dioxins. These exposures resulted from improper waste disposal (Love Canal and Times Beach), industrial malfunction (Seveso), and the spraying of a herbicide (Agent Orange) contaminated with dioxins as a war chemical. The introduction of approximately one gram of dioxins and 50 kilograms of PCBs into animal food supplies in Belgium triggered widespread food recalls that caused some US$3 billion in damage to the Belgian economy. Worldwide, incinerators are the primary source of dioxins.

Other pollutants of concern from incinerators include other (non-dioxin) halogenated hydrocarbons; acid gases that are precursors of acid rain; particulates, which impair lung function; and greenhouse gases. However, characterization of incinerator pollutant releases is still incomplete, and many unidentified compounds are present in air emissions and ashes.

Incinerator operators often claim that air emissions are “under control,” but evidence indicates that this is not the case. First, for many pollutants, such as dioxins, any additional emissions are unacceptable. Second, emissions monitoring is uneven and deeply flawed, so even current emission levels are not truly known. Third, the data that do exist indicate that incinerators are incapable of meeting even the current regulatory standards.

Dioxin causes cancer in laboratory animals, and several studies of humans show an increased incidence of various forms of cancer. It is also toxic to the immune system, and it interferes with normal reproduction and development. Primate studies show an association between dioxin exposure and endometriosis. Dioxin interferes with thyroid hormone levels in infants. These effects may occur at extremely low exposure levels. Large accidental or occupational exposures cause a skin rash (chloracne), weight loss, fatigue, decreased libido, altered glucose metabolism, and neurological damage. Dioxin repeatedly causes cancer in virtually all studies in experimental animals at doses well below those which are otherwise toxic.

When air pollution control equipment does function, it removes pollutants from the air and concentrates them in the fly ash, creating a hazardous waste stream that needs further treatment. Thus, the problem of pollutant releases is not solved; the pollutants are simply moved from one medium (air) to another (solids or water). Incinerator ash is highly hazardous but is often poorly regulated. Even landfill disposal is not safe, as landfills leak; but in some places the ash is left exposed to the elements or even spread in residential or food-producing areas. TWA underlined that it is a fraudulent carbon trade project, how every incinerator based waste to energy plant has failed in its journey from Delhi’s Timarpur to Elikatta Village of Andhra Pradesh and how one Australian company’s six proposals for WTE plant had to be shelved.

These incinerator projects are destroying the livelihood of about 3.5 lakh waste recycling workers and valuable resource material for compost that is required to be treated by composting/anaerobic digestion/vermin composting/other biological processing for stabilization as per Municipal Solid Waste(Management & Handling) Rules framed under Environment Protection Act, 1986. In the CPCB report, Dr A B Akolkar, Director, CPCB emphasized that as per Municipal Solid Waste(Management & Handling) Rules ‘biodegrdable waste’ is to be treated using biological method rather than deriving RDF or by incineration as is being done by Jindal Ecopolis. It demonstrates that the Timarpur-Okhla Waste to Energy Incinerator Plant violates the Rules.

TWA informed IAAPC that it was in March 2009 that Sukhdev Vihar Residents filed the Writ Petition (Civil) which was initially dismissed on 12th August, 2009 because of misrepresentation of facts by A S Chandiok, Additional Solicitor General (ASG). The court later found that it was misled earlier by ASG which had led to it dismissing the petition. On December 18, 2009, ASG sought time to file his reply as Court's order. The Petition was restored and the bench headed by the Chief Justice, Delhi High Court in an order dated 15th January, 2010 The court observed, “that the project in question” and “the location of the pilot project in Delhi was neither recommended by the Expert Committee nor approved by the Supreme Court.” The respondents, the government was "granted one week's more time to file reply as a last chance" by the court in its order dated February 3, 2010. Till date ASG's reply has not been filed.

Delhi High Court order of July 18, 2011 reads: "It is submitted by Mr. Nigam, learned senior counsel for the petitioner that the plant is going to be operated to be soon. Learned counsel has submitted that he has been instructed to state that Delhi Pollution Control Committee has issued the consent to operate. Mr.Waziri, learned standing counsel for GNCTD and DPCC submitted that consent to establish has been given but consent to operate has not yet been given. Needless to emphasize, without obtaining consent for operation, the plant cannot be operationalized." But even as this submission was given by the Delhi Government to the Court, the plant started operating since January 2012 with impunity. Instead on January 24, 2012, the Court observed in its order, "The respondent No.9 arranged for the power point / video demonstration of the plant in question. Learned counsel for the respondent No.9 seeks permission to place the same on record supported by an affidavit and explaining the process." It appears to be a case of justice delayed and justice denied because the project proponents now have created a fait accompli situation for the court.

IAAPC’s Delhi Chapter deliberated on the crisis of environmental toxicity due to these incinerators at its executive/managing committee on August 4, 2012. S K Gupta, Secretary of IAAPC and other members of IAAPC opined that the burning of mixed municipal waste laced with heavy metals is a matter of concern. Its health impact studies ought to be undertaken to ascertain its adverse impact.