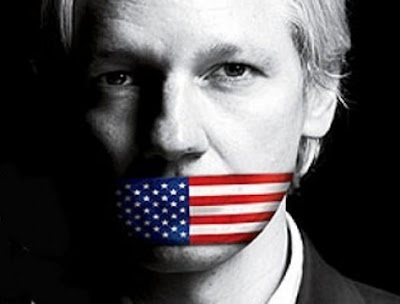 Official Statement by Julian Assange from the Ecuadorian Embassy

I am here because I cannot be closer to you.

Thank you for being here.

Thank you for your resolve and your generosity of spirit.

On Wednesday night after a threat was sent to this embassy and the police descended on the building, you came out in the middle of the night to watch over it and you brought the world’s eyes with you.

Inside the embassy, after dark, I could hear teams of police swarming into the building through the internal fire escape.

But I knew that there would be witnesses.

And that is because of you.

If the UK did not throw away the Vienna Conventions the other night, it is because the world was watching.

And the world was watching because you were watching.

The next time somebody tells you that it is pointless to defend the rights we hold dear, remind them of your vigil in the dark outside the Embassy of Ecuador, and how, in the morning, the sun came up on a different world, and a courageous Latin American nation took a stand for justice.

And so, to those brave people:

I thank President Correa for the courage he has shown in considering and granting me political asylum.

And so I thank the government and the Foreign Minister, Ricardo Patiño, who have upheld the Ecuadorian constitution and its notion of universal rights in their consideration of my case.

And to the Ecuadorian people for supporting and defending their constitution.

And I have a debt of gratitude to the staff of this embassy whose families live in London and who have shown me hospitality and kindness despite the threats that they have received.

This Friday there will be an emergency meeting of the foreign ministers of Latin America in Washington D.C. to address this situation.

And so I am grateful to the people and governments of Argentina, Bolivia, Brazil, Chile, Colombia, El Salvador, Honduras, Jamaica, Mexico, Nicaragua, Peru, Venezuela and to all other Latin American countries who have come to the defence of the right to asylum.

To the people of the United States, the United Kingdom, Sweden and Australia who have supported me in strength while their governments have not. And to those wiser heads in government who are still fighting for justice. Your day will come.

To the staff, supporters and sources of WikiLeaks whose courage, commitment and loyalty have seen no equal.

To my family and to my children who have been denied their father: forgive me. We will be reunited soon.

As WikiLeaks stands under threat, so does the freedom of expression and the health of our societies.

We must use this moment to articulate the choice that is before the government of the United States of America.

Will it return to and reaffirm the values it was founded on?

Or will it lurch off the precipice dragging us all into a dangerous and oppressive world in which journalists fall silent under the fear of prosecution and citizens must whisper in the dark?

I say that it must turn back.

I ask President Obama to do the right thing.

The United States must renounce its witch-hunt against WikiLeaks.

The United States must dissolve its FBI investigation.

The United States must vow that it will not seek to prosecute our staff or our supporters.

The United States must pledge before the world that it will not pursue journalists for shining a light on the secret crimes of the powerful.

There must be no more foolish talk about prosecuting any media organization, be it WikiLeaks or the New York Times.

The US administration’s war on whistle-blowers must end.

Thomas Drake, William Binney, John Kirakou and the other heroic US whistle-blowers must - they must - be pardoned and compensated for the hardships they have endured as servants of the public record.

And the Army Private who remains in a military prison in Fort Leavenworth Kansas, who was found by the UN to have endured months of torturous detention in Quantico Virginia and who has yet - after two years in prison - to see a trial, must be released.

And if Bradley Manning really did as he is accused, he is a hero, an example to us all and one of the world’s foremost political prisoners.

Bradley Manning must be released.

On Wednesday, Bradley Manning spent his 815th day in detention without trial. The legal maximum is 120 days.

On Thursday, my friend, Nabeel Rajab, was sentenced to 3 years for a tweet.

On Friday, a Russian band was sentenced to 2 years in jail for a political performance.

There is unity in the oppression.

There must be absolute unity and determination in the response.

Julain Assange is founder of WikiLeaks