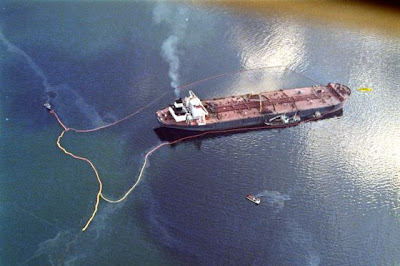 The ship caused a major ecological disaster in Alaska in 1989

The tanker 'Exxon Valdez', after the accident, its cargo of oil poured into the bay waters of Prince William Sound, Alaska (USA) in 1989. / AP

He has made his last journey to be dismantled on the beaches of India. That will be the end of the oil tanker Exxon Valdez, which in 1989 spilled nearly 37,000 tons of crude oil in the coast of Alaska (USA), one of the biggest ecological disasters in history.

After learning that the ship, which has changed its name seven times and is now called Oriental N (Oriental Nicety), went to Indian shores, environmentalist Gopal Krishna asked last May to the Indian Supreme Court to stop him. According to Krishna and other activists, were not fulfilled the conditions of the Basel Convention for the rich countries should not export toxic waste to developing countries. The ship contains hazardous substances, including mercury, arsenic and asbestos, they say.

Since early August, the steel colossus lay on the beach where you will be reduced gradually

The Exxon Valdez remained offshore India awaiting the decision of the Court for over three months with his crew of 15 people on board. At the end of June rose state maritime authorities to inspect the boat. And in late July, the Supreme Court decided to accept that the colossus was scrapped by the hands of workers in Alang coast in Gujarat, western India. Since the beginning of the month the steel colossus lay on the beach where you will be reduced gradually take about four months of work by about 500 people. Even among other giant ships, the Exxon Valdez looks impressive with its 228 meters long and over 34,000 tons.

Although it is out of circulation, the ship continues to be potentially hazardous to the environment and the people who scrapped, according to activists. Krishna, who began the legal battle against its dismantling in India and representative of Toxics Watch Alliance, says the oil still has many toxic, but its entry was permitted by corruption.

Be cut piece by piece on the beach itself, by the method known as beaching, which experts say is the cheapest financially, but also the most costly to the environment and that puts them at increased risk to workers. Working conditions in these cemeteries are terrible, because it works without even gloves, helmets or shoes, and most workers are immigrants living in impoverished situation.

Environmentalists say the oil has many toxic substances still inside

Despite being upset with the Supreme Court decision, the environmentalist Krishna, is optimistic: "This is a losing battle, but maybe we will win the war" sentence. In the court order specifies that in the future, the owners vessels die reach India, will have to demonstrate that they were cleansed of toxic materials.

But for now the Exxon Valdez, which has waved American flags, the Marshall Islands, Panama and Sierra Leone, is already on the Indian coast. Thus ends the life of the boat 23 years ago, ran aground on Bligh Reef in Prince William Bay and spilled over 41 million gallons of oil, polluting around 3,000 km of coastline and killing thousands of animals, including seals , pitchforks and different types of birds. The spill also affected fishermen and therefore the economy of the region.

Sold several times, in 2008, the Exxon Valdez was transformed into a cargo ship and in 2010 suffered another serious accident when colliding with another Chinese freighter.

The ship graveyard where you are now is the most ships scrapped worldwide. Since opening in 1983 have been there about 6,000 ships. The steel giants are dismantled by the bare hands of thousands of men, working in sweatshops. Many die due to accidents and toxic substances. Most of these boats-waste including asbestos, heavy metals and paints-end costs.