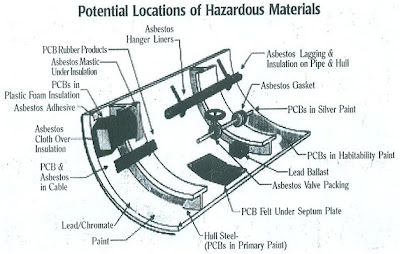 Hazardous Waste Rules need to be revised for compliance with Convention

The implication of this direction would be that all the ships which are have entered or are entering the Indian territorial waters have to show compliance of Basel Convention. In case there is non compliance, all these ships should go back to country of origin.

The Applicant in the case, Gopal Krishna commented, “Exxon Valdez did not follow the Basel Convention and therefore according to the judgment dated 06.07.2012 it should have been sent back to the country of export. The Court ought to have applied Precautionary Principle not for the purpose of dismantling the ship but for sending it back because the principle implies that the pollution of hazardous nature has to be avoided particularly when its impact on environment and human health are not known.” A copy of the Basel Convention and its Technical Guidelines is attached.

In fact the Bench asserted in this order what they have said in their final judgment dated 06.07.2012 namely that all Ships coming for dismantling have to follow Basel Convention and if there is any violation, action should be taken according to the Municipal Laws.

The main concern of the Applicant was that ships like Exxon Valdez are End of Life ships and the entire ship itself is hazardous waste which are regulated under Basel Convention as it is embedded with asbestos waste, cables containing PCT, heavy metals, paint chips etc. the argument was not that the Ship contains any hazardous waste in loose form. None of the above mentioned authorities had given any inventory to the court about hazardous waste contained in the body of the Ship.

The arguments which were advanced by Applicant’s advocate Mr. Sanjay Parikh regarding following Basel Convention namely, that there should be prior decontamination by the country of Export and prior permission by the country of Import before Ship enter the Indian territorial waters. These have been recorded in the judgment.

The term "disposal" is further defined to mean "any operation specified in Annex IV to this Convention" (Article 2, paragraph 4). Annex IV includes final disposal operations and operations which lead to recovery, recycling, reclamation, direct re-use or alternative uses. Under Annex IV, paragraph B., ships destined for ship-breaking will, in fact, fall within the entry: "R4 Recycling/reclamation of metals and metal compounds".

Notably, ships destined for ship-breaking operations are "hazardous wastes" under the Convention.

-and a host of Y19 to Y45 constituents such as Y23 Zinc compounds, Y26 Cadmium; cadmium compounds, Y31 Lead; lead compounds, Y36 Asbestos (dust and fibers).The Parties to the Basel Convention further supplemented Annex I and III by elaborating specific wastes as hazardous wastes and including such wastes in Annex VIII. Annex VIII contains many entries of specific wastes which are contained in ships destined for ship-breaking.

i. The ship-breaking operations in non-OECD countries like India do not constitute environmentally sound management as required by the Convention. Ships destined for ship-breaking contain significant quantities of asbestos, PCBs, hydraulic fluids, paints containing lead and/or other heavy metals, tributyltin or TBT antifouling coatings, contaminated holding tanks, and other substances rendering them hazardous waste and extremely dangerous to human health and the environment when scrapped in the existing ship-breaking yards.

ii. In addition, Article 4, paragraph 3 requires the Parties to "consider that illegal traffic in hazardous wastes or other wastes is criminal."Article 4, paragraph 4 requires that "Each Party shall take appropriate legal, administrative and other measures to implement and enforce the provisions of this Convention, including measures to prevent and punish conduct in contravention of the Convention."Therefore, each Party has a legal obligation to prohibit such ship exports and must do so with respect to all persons ("any natural or legal person" - Article 2, paragraph 14) subject to its jurisdiction, e.g., exporters, importers, brokers, owners, those persons in possession and/or control of the ship, captains, etc.

iii. In order to export a ship for ship-breaking, there is a legal requirement to decontaminate it such that it no longer contains Basel Convention hazardous substances prior to export.

iv. Among other things, what is emphasized in the Convention is prior informed consent and the disposal of waste in an environmentally sound manner. India has signed and ratified the said convention, in the order dated 14.10.2003- (2005)10 SCC 510 it has been observed that the Basel Convention is a part of Article 21 of the Constitution.

“Transboundary movements of hazardous wastes or other wastes can take place only upon prior written notification by the state of export to the competent authorities of the states of import and transit.”

vi. The Basel Convention Technical Guidelines specifically points out: Ballast water which is fresh, brackish or marine water that has intentionally been brought on board a ship in order to adjust the ship’s stability and trim characteristics in accordance with various operating conditions “may contain pollutants, such as residual fuel, cargo hold residues, biocides, oil and grease, petroleum hydrocarbons, and metals (e.g. iron, copper, chromium, nickel, and zinc). Ballast water in cargo tanks (oil) is referred to as dirty ballast water. The transport of large volumes of water containing organisms from shallow, coastal waters across natural oceanic barriers can cause massive invasions of neritic marine organisms. Because ballast water is usually taken from bays and estuaries with water rich in animal and plant life, most ships carry a diverse assemblage of aquatic organisms. Aggregate sediments typically found in ballast tanks will contain living species which reflect the trade history of the vessel.”

It further adds: ‘The arrival condition of the dismantling candidate is most likely that of “in ballast”. The discharge of ballast water/ sediment species into the coastal sea-area may be a potential source for introducing unwanted organisms which threaten the ecological balance in the surrounding seas and thereby represent a direct threat to biodiversity. Ballast water can be the carrier of viruses and bacteria transferred to humans causing epidemics. In order to limit the biological threat represented by the introduction of invasive species via ballast water, the vessel should undergo recommended de-ballasting.

In view of the July 30 and July 6, 2012 judgments of the Court, Union Ministry of Environment & Forests will have to revise its Hazardous Rules to become complaint with the Court’s order and Basel Convention.

The Applicant will approach the relevant Parliamentary Committees to seek their intervention because Court’s order and international law is being violated through subordinate legislations and through creating a fait accompli situation like in the case of end of life ships like Riky, Blue Lady, Platinum II and now Exxon Valdez to facilitate hazardous waste dumping.

A separate application is being filed in the larger matter of hazardous waste management in the country to ensure compliance with Court’s directions of the October 14, 2003 order and the recommendations of the Supreme Court Monitoring Committee on Hazardous Wastes. Bangaldesh Supreme Court order had taken cognisance of the hazardous materials on ship and has reproduced its diagram both are attached.