Coca-Cola Sold in Brazil is Most Contaminated

WASHINGTON - (drinks media wire) - Coca-Cola sold in California now contains little of the cancer-causing chemical 4-methylimidizole (4-MI), but new laboratory tests show alarming levels of the carcinogen in Cokes sold elsewhere around the world. The carcinogen forms when the ammoniated caramel coloring used in colas is industrially produced. Coke began using a less-contaminated caramel coloring earlier this year in California after the state required a cancer-warning notice on soft drinks with excessive levels of 4-MI. CSPI first released test results showing the levels of 4-MI in Coke and Pepsi in March. 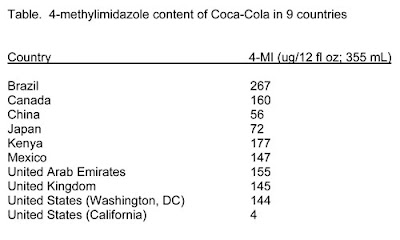 Coca-Cola obtained from Brazil had 267 micrograms (mcg) of the carcinogen per 12 fluid ounces (355 ml). Coca-Cola from Kenya had 177 mcg per 12 ounces. Cokes marketed in Canada, the United Arab Emirates, Mexico, and the United Kingdom had between 144 mcg and 160 mcg per 12 ounces. Coke from China had 56 mcg and in Japan had 72 mcg. Coca-Cola purchased in Washington, DC, had 144 mcg per 12 fluid ounces, while Cokes bought in California contained only 4 mcg.
See the graph below.

To put those levels into context, the state of California requires a cancer-warning label if a food would lead to people consuming 30 mcg or more of 4-MI per day. Thus, people drinking one 12-ounce soda per day would ingest that much if the soda contained 30 mcg or more of 4-MI. The state estimates that that amount of 4-MI would cause cancer in one in 100,000 people over their lifetimes.

The U.S. Food and Drug Administration restricts carcinogenic contaminants in food to lower levels—amounts that would not cause more than one cancer per million people. If the FDA applied its standard, a Coke would have to have under 3 mcg of 4-MI. Coca-Cola marketed in California is close to meeting that standard, but Cokes in most other countries, even allowing for lower consumption in most countries, greatly exceed that standard.

CSPI’s test results will be published shortly in the International Journal of Occupational and Environmental Health (vol. 18, No. 3).

“Fortunately, people in China, Japan, Kenya, and some other countries drink much less soda than we Americans do, so their exposure to this dangerous chemical is proportionately lower,” said CSPI executive director Michael F. Jacobson. “But now that we know it’s possible to almost totally eliminate this carcinogen from colas, there’s no excuse for Coca-Cola and other companies not to do so worldwide, and not just in California.”

CSPI obtained the Coca-Cola from consumer advocates or others in the countries represented in this study. Some of those people are releasing the test results today to media in their counties and bringing the carcinogen to the attention of their respective health ministers.

In February 2011 CSPI first urged the FDA to prohibit ammoniated caramel coloring and to use a more accurate term for the ingredient. In contrast to the caramel one might make at home by melting sugar in a saucepan, the artificial brown coloring in colas and some other products is made by reacting sugars with ammonia (and often sulfites) under high pressure and temperatures. Chemical reactions between the sugar and the ammonia result in the formation of 4-MI, which caused lung, liver, and thyroid cancer or leukemia in laboratory animals in studies conducted by the United States government’s premier testing laboratory. A major manufacturer (D.D. Williamson) of caramel colorings says that it offers a coloring that is totally free of 4-MI, but it is four times more expensive and beverage companies aren’t purchasing it.

Five prominent experts on animal carcinogenesis, including several who worked at the National Toxicology Program, joined CSPI then in calling on the FDA to bar the use of caramel colorings made with an ammonia process. “The American public should not be exposed to any cancer risk whatsoever as a result of consuming such chemicals, especially when they serve a non-essential, cosmetic purpose,” the scientists wrote.

Although the presence of a known chemical carcinogen in such a widely consumed product is troubling, CSPI says that consumers should be more worried about the much greater risk posed by the sugar or high-fructose corn syrup in Coca-Cola and other sugary beverages. Overconsumption of sugary drinks raises one’s risk of weight gain, obesity, diabetes, tooth decay, and other health problems.

The Center for Science in the Public Interest is a nonprofit health advocacy group based in Washington, DC, that focuses on nutrition and food safety policies. CSPI is supported by the 900,000 U.S. and Canadian subscribers to its Nutrition Action Healthletter and by foundation grants.