March To reclaim Water as Commons 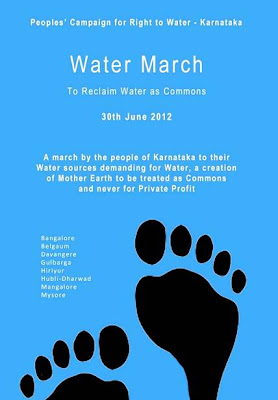 India is fast becoming a desert. The governments own reports detail wide scale destruction of water bodies and aquifers all around the country. Lakes, rivers and ponds are being destroyed with impunity and ground water is being mined on an unprecedented scale. The significance of the data is self-evident. India is facing a future with little or no water. Water along with the air we breathe, and the seas, the forests, the mountains are all creations of nature that we inherit jointly and freely, and hold in trust for future generations are all called ‘Commons’.

Water is the most crucial Commons, one of the very few things on which everyone is dependent - the source of all life. Some see Water as life itself and call it ‘Living Water’. When governments do not adequately protect the Commons on our behalf, they fail us as well as future generations.

In 1930, when the British passed the inhuman salt tax law forcing us to buy salt from their companies by banning our own traditional practices of making salt from our huge coast line, a nation’s imagination was aroused by Gandhi who organised the iconic Salt March as a symbol of resistance against oppression. “Next to air and water, salt is perhaps the greatest necessity of life,” Gandhi said while addressing tens of thousands of people during the march. Even earlier, Dr. Ambedkar stressed the need to understand water from Justice, Sovereignty and Citizenship perspectives during the Chavdar lake struggle demanding for equal access to water by marginalised communities.

While the poor have always been denied access to appropriate quantity of potable water, the desertification of India is an existential issue for the many civilisations that make up this country. Instead of focussing on the root causes of this destruction, the National water policy 2012 is deliberately playing in to the hands of powerful international interests who want to commoditise, privatise and profiteer from water. It denies water the status of a Commons and reduces it to an economic commodity to be auctioned off to the highest bidder. Faced with a National outcry, the water resources minister of the Government of India has gone to the extent of lying to the parliament by quoting utterly failed, distant water privatisation models in Karnataka as grand successes.

Because the state has not let our repeated requests for water justice appeal to its heart, and deeply concerned with the dire water situation and the state’s intent to use it to push for policies and laws that facilitate private profiteering, the Peoples’ campaign for right to water – Karnataka is organising a simultaneous march by informed people in six districts across Karnataka to the nearest river as a direct action to reclaim water as Commons with the understanding that approaching the future of water through the Commons lens offers the best possibility to a sane, sustainable and just future for the conservation, use and management of water in India.