Note: While water supply system must be rectified and improved in a routine manner. Concerns about water quality concerns must be seen in the backdrop of efforts underway to privatise water in the name of public private partnership (PPP). The infrastructure is not being maintained and is allowed to deteriorate to create a rationale for PPP. These surveys merit attention but its a call for improving water supply infrastructure in Delhi's all the 21 water zones. Citizens can see through the designs. Delhi Jal Board (DJB)'s manpower should be increased and contractual jobs must be regularized to ensure improvement and maintenance of infrastructure. Delhi residents have tasted the results of privatization of electricity, come what may they will not allow water to be privatized. What is required is equitable distribution of water and ban on bottled water industry.

A day after a water survey was conducted by North Delhi Municipal Corporation revealed the supply of contaminated water in North Delhi areas, the Delhi Jal Board on Thursday contradicted the report and claimed that water being supplied in the area was fit for drinking.

The agency, which is responsible for supply of drinking water in the Capital, said its process for testing the quality of water is governed by the BIS and they are tested on physico-chemical and bacteriological parametres.

“DJB carries out water sample tests by an independent unit headed by Director, Treatment and Quality Control (DTQC). The percentage of purity ranges between 98 to 99 per cent; well within the WHO guidelines. The report for the month of January to May 2012 clearly indicates that the water supplied by DJB to the consumers is potable and meets BIS standards,” it said through a Press statement. DTQC, on an average, collects 300 to 400 water samples per day from various locations from all parts of the city including from consumers end, it added.

The DJB said its water is also tested through an independent National Scientific agency NEERI (National Environment Engineering Research Institute), an ISO 9001-2008 certified organisation. “With a network of more than 16,000 km of water pipeline, the DJB received on an average of 25 to 30 complaints everyday related to local contamination. The matters are immediately referred to the quality control wing which gets the samples lifted from the affected pockets and remedial actions are carried out further. In cases of contamination, affected pockets are isolated from the rest of the distribution network and supply is restored only after identifying and removing the cause of contamination,” it maintained.

Fifty per cent of drinking water supplied to north Delhi is not fit for consumption and is a carrier of cholera, typhoid and jaundice, surveys conducted by the North Delhi Municipal Corporation have found. On the other hand, people in south Delhi get clean, drinkable water, said a recent survey by the civic body’s south arm and the Delhi Jal Board (DJB).

A report prepared on June 16 added that this led to a corresponding increase in cholera cases. Between May 1 and June 15, the corporation registered 41 cases as against 24 in 2011 and 36 in 2010. 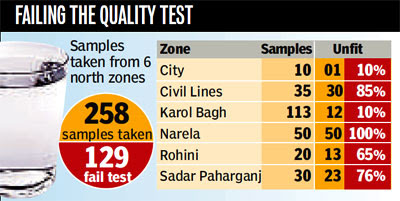 The DJB, however, rubbished the “politically motivated” claim. “The report is misleading because DJB’s own tests show the water meets prescribed standards,” said its spokesperson Sanjam Chima. She added that since the corporation conducted the test without involving the DJB, the source of the water was doubtful.

In May too, the three corporations — east, north and south — had pulled up the DJP, which in turn had insisted its water met WHO standards. The three bodies had collected 116 samples then of which 81 were tagged unfit.

New Delhi: Around a quarter of families living in slums across the national capital are drinking contaminated water, according to a survey released Wednesday.

The survey was conducted ahead of World Water Day Thursday by the NGO “Save the Children” in 60 slum clusters in six districts of Delhi.

The NGO tested different drinking water outlets such as Delhi Jal Board pipelines, water tankers as well as submersible pumps and hand pumps for biological contamination.

The findings show that the quality of water is alarmingly poor in slum clusters across Delhi with around 26.52 percent of families living in Delhi’s slums drinking contaminated water.

“Though tests were confined largely to slums, a few water sources were randomly tested in planned localities as well. It was found that often, the type of habitation is a determinant of water quality. For example, a sample tested in south Delhi’s Alaknanda tested negative,” said the survey.

Water pollution has a direct bearing on the health of people, especially children.

“Children suffering from diarrhoea are more prone to malnutrition and malnourished children are more likely to suffer from diarrhoea. It is a vicious cycle and children often are most vulnerable to it,” said Ishaprasad Bhagwat, National Manager (Health), Save the Children.

If you drink water straight from the tap - don't. Every fifth person in the national capital is not getting purified drinking water, which is what the city's water utility, the Delhi Jal Board (DJB) claims to supply, but a potentially deadly cocktail of disease-carrying germs, a survey by the municipal health department has found.

The findings of the survey, which tested water samples from six hundred locations spread across the Capital, are shocking.

Close to 20 per cent of the samples were found to be unfit for human consumption. And that too, by Indian standards, which are ten times higher than the level considered acceptable in the West.

The survey, conducted by the Health Committee of the Municipal Corporation of Delhi (MCD), found that as many as 111 out of the total of 616 samples taken contained more than ten "colony forming units (CFU)" per 100 ml of Coliform bacteria. 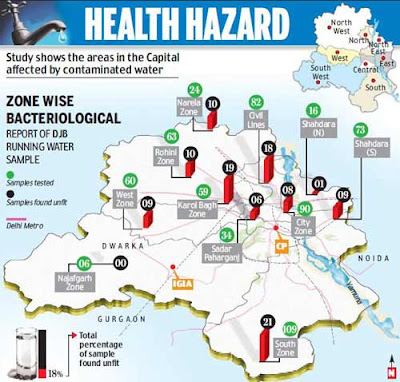 The result is a virtual bio weapon, which can cause gastrointestinal diseases like typhoid, cholera, gastroenteritis, or jaundice.

Indian standards allow up to 10 CFU per 100 ml. The standard prescribed by the New York municipal authority, on the other hand, is 1 CFU/100 ml.

What is worse, posh areas like South Delhi and Karol Bagh are actually the worst hit as far as water contamination is concerned. The report is an eye-opener for Delhiites.

"Residents of the city are drinking water mixed with sewer water due to negligence of the government and the DJB. It is criminal negligence on the part of the authorities concerned," said Dr V.K. Monga, chairman of the MCD's public health committee.

Dr Monga said the committee decided to act after receiving multiple complaints from many areas regarding the quality of water. "People complained that they were getting water which looked as if sewage was mixed with it," said Monga.

After the complaints, a meeting was held at the civic body's health department in the end of December 2010 and a drive to take water samples from across the city was undertaken.

The samples were collected during the months of January and February and tested at the Delhi government's certified health laboratory. The report was submitted last week. The civic body does undertake periodic water testing, but it was for the first time that a drive on such a large scale was carried out to check the contamination in potable water, claimed Dr Monga. "We send the reports to the Delhi government and the DJB. It is upon them to take further action," added Dr Monga.

Predictably, the DJB hotly denied that anything was wrong with the water it supplied.

Ramesh Negi, the CEO of DJB, raised questions about the places from where the samples had been taken. "If the samples have been taken from unauthorised colonies or clusters, there are obvious issues there which need to be addressed. I am still waiting for an official report from the MCD commissioner," he said.

On the other hand, the report claims that the water samples were lifted from those areas where the DJB is the water supplying agency. The DJB is headed by chief minister Sheila Dikshit as chairperson and is the sole water supply utility in the city.

Delhi BJP president Vijender Gupta blamed the city government for this and said that it could not escape responsibility. "The chief minister is directly responsible for supplying poisonous and contaminated water that is spreading diseases among the people. A case should be filed against her for deliberately indulging in a criminal act."

Negi also claimed that the DJB, on its own, was taking over 400 random samples each day from different places in the Capital. "We have our own mechanisms
in place to check that the people get good quality of water. Each year, we have changed over 200 kilometre of new pipeline. All the mechanisms are in place; let us receive their exact report before giving a reaction," Negi said.

But the situation could actually be worse. Had the samples been taken during peak summer or the rainy season, the findings could have been worse, Dr Monga admitted.

DJB officials said that pipes supplying water in many areas of the city were old. At many places, they also passed by drains. In such a condition, these pipes carrying potable water develop micro-cracks.

The chances of waste water from the drains getting mixed with potable water can't be ruled out at some places, said an officer requesting anonymity.

Manoj Mishra of water NGO Yamuna Jiye Abhiyan said, "It is unfortunate that polluted water is being supplied in the city. It is mainly due to old infrastructure which needs over-hauling."

hello krishna,
great work you have done here.. we live in north Delhi, Rohini sec 21 and since previous 5 days we are getting extremely dirty and toxic water supply.. my hands started itching , inflammation and swelling occured when i just washed my hands with the water that was already filled in my tank which was almost hundred litres and had got contaminated with about one litre of dirty water which entered my water tank when we tried to switch on the motor to see whether water supply is there or not and stopped immediately as we saw foul smelling filthy water coming out of it.. so the contamination was about 1:100 and still it is giving me and my 4 year old baby allergic reactions, nausea, stomach pain ,itching etc.
its been 5 days and we are forced to live with that..
please suggest how may i attract attention of our so called responsible authorities towards this...