skip to main | skip to sidebar
Home » » Dead US vessel, a test case for India’s lax environmental and labour laws

Dead US vessel, a test case for India’s lax environmental and labour laws

Exxon Valdez raises toxic fears as it heads to graveyard 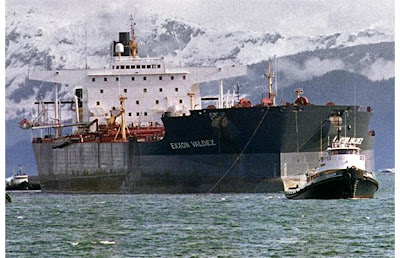 The Exxon Valdez, here seen in Alaska in 1989, has been renamed and is now floating off the coast of India, where it is destined to be broken apart.
Photograph by: CHRIS WILKINS , AFP
ALANG, India — For the ship formerly known as the Exxon Valdez, even sailing quietly into the sunset is proving difficult.

Now called the Oriental Nicety, it’s floating off India in a kind of high-seas limbo as a court decides whether the vessel that dumped 11 million gallons of crude oil into Alaska’s unspoiled Prince William Sound in 1989 can be hacked apart in this forlorn graveyard for once-mighty ships.

Local environmentalists have petitioned the High Court here in the western state of Gujarat to block its entry pending an onboard inspection for toxic chemicals, including mercury, arsenic and asbestos.

Environmentalists acknowledge it’s probably no more toxic than so many other ships recycled at Alang, a city whose coastline was once edged with forest and is now lined with about 175 ramshackle yards pulling vessels apart. But they say the standoff focuses attention on India’s lax environmental, labor and safety standards governing the billion-dollar ship-breaking industry.

“The ex-Exxon Valdez is a test case for the robustness of India’s regulatory framework,” activist Gopal Krishna of ToxicsWatch Alliance wrote in a court filing.

In an industry that benefits from cheap labor, “they want to drop the problem on the poor people of India,” said Jim Puckett, Seattle-based head of the Basel Action Network activist group.

Dharamveer Sharma, 45, landed here from Bihar state. As he cut apart flammable oil cylinders with oxyacetylene torches at a yard, he said he lives in constant fear.

“But I need the money,” he said. “One day I’ll quit and go back home and the memories of this place will haunt me.”

The scene on Alang’s six-mile-long beach seems the stuff of nightmares. Because of a 38-foot tidal variation, vessels meeting their end can sail straight onto its sand, no need for expensive docks. About 35,000 migrant workers, human vultures of a sort, then hack at carcasses that soon resemble half-eaten whales.

What’s not easily sold off is chopped up for scrap metal in this world of Victorian squalor. In a lot beside an asbestos treatment center, a worker sat in the dirt bashing at ship instruments, toxic smoke from burning transistors curling around him, surrounded by piles of wire and glass.

The Oriental Nicety’s most recent owner, Alang-based scrap company Priya Blue, says it is confident of a favorable ruling soon on the ship’s fate. If not, or if the legal limbo drags on too long, it may divert the ship to Bangladesh or Pakistan. Both neighboring countries have similar laws against importing toxic material, although ships are often brought in illegally.

“We’ll fight it if we learn it’s happening,” said Muhammad Ali Shahin, an activist with the Bangladeshi environmental group Platform on Shipbreaking.

A partner at Priya Blue stood up for the infamous vessel. “We are 110 percent sure the ship is safe,” Sanjay P. Mehta said. An injured person who heals is considered healthy, he said. “It’s the same with the Exxon Valdez. The spill happened a long time back. It’s not hazardous.”

A 2006 study commissioned by India’s Supreme Court found 16 percent of ships broken apart here had asbestos traces. “I can’t say we haven’t had (tuberculosis) or deaths, just not an epidemic,” said B.N. Singh, a ship safety officer and union official, who says at least the fibers remain wet in the surf. “Whether workers survive or die in their village, no one knows.”

Alang’s yards have had a record year, scrapping more than 400 ships in 2011-12, an end-of-life business that often flourishes when the economy slumps.

Rehani bid for the Oriental Nicety not knowing its history but lost out to Priya Blue, which reportedly paid $16 million — a loss that was a lucky break for Global Marketing, given the legal standoff.

The yards at Alang, the world’s largest ship-breaking operation, have broken apart more than 5,900 ships since they started in 1983 by handling Soviet navy vessels. At any given time, more than 100 ships are waiting offshore or are beached in various stages of disassembly.

The yards work through worldwide agents that buy dying ships and sail them to Alang, where they’re stripped of everything, their hulls then cut apart with welding torches and sold off — a process sometimes called “razor-blading,” from the days when shavers made use of the recycled metal.

A yard might pay $1.5 million for a 5,000-ton ship and take in $2.25 million selling the bits three months later. India gets 8 percent of its steel from recycled ships; its jugaad culture of reusing almost everything wrings out more profit than in other countries.

With each ship arrival, workers perform a puja, or blessing, splitting a coconut for the deities, especially elephant god Ganesha, said to protect those facing dangerous tasks.

Two years ago, six people were killed when an oil cylinder caught fire. It was “like they were burned alive in a tandoori oven,” said Arvind Kumar Tripathi, a safety officer at Alang’s Nagarsheth Ship Breakers.

Since 1983, 372 people have died, according to the Gujarat Maritime Board, although labor and human rights groups say it’s closer to 50 a year.

“They treat us like dogs and throw us away like dogs,” Singh said.
© Copyright (c) The Calgary Herald