This is with reference to The Washington Post news report, “The many lives of the Exxon Valdez” (March 29, 2012) that relates to a hazardous end-of-life vessel Oriental Nicety (formerly Exxon Valdez, Exxon Mediterranean, Sea River Mediterranean, S/R Mediterranean, Mediterranean, and Dong Fang Ocean) has been purchased by Best Oasis, a subsidiary of Priya Blue Industries based in Alang, Gujarat. This purchase is in violation of the Supreme Court’s order of October 14, 2003 and UN’s Basel Convention on Transboundary Movement of Hazardous Wastes and Their Disposal to which India is a party. This is a second such ship originally from USA that is outwitting Indian laws since 2009. The picture of the ship and its profile is attached. 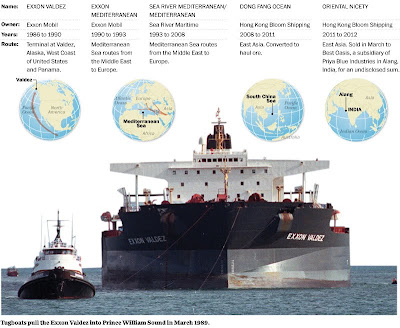 I submit that USA’s regulations and European Union regulations prohibit the entry of such vessels. The collusion among maritime officials appears to have facilitated its entry into the Indian waters violating apex court’s order and the precedent set by Le Clemenceau. Such criminal acts of omission and commission merit a high level probe to ascertain the dubious circumstances in which this has happened.

I am an applicant in the Supreme Court in the hazardous wastes/shipbreaking case. The case came up for hearing on March 28, 2012. The next date of hearing is on April 18, 2012. The application for dead and hazardous US ship Platinum II which entered Indian waters in 2009 on fake documents forms part of this case. In an Office Memorandum No.29-3/2009-HSMD, Government of India, Ministry of Environment & Forests, (HSM Division) dated 9th May, 2011 relating to implementation of Supreme Court directions in respect of ship breaking activities, it has been admitted that the issue regarding the submission of fake certificates by the ship owners/agents remains unresolved. I apprehend that ex-Exxon Valdez may also have fake documents.

I submit that Oriental Nicety (formerly Exxon Valdez, Exxon Mediterranean, Sea River Mediterranean, S/R Mediterranean, Mediterranean, and Dong Fang Ocean) was purchased in March 2012 by a US based company Global Marketing Systems (GMS), which is one of the biggest, cash buyers for dead ships. It has been sold to Best Oasis for about $16 million.

This 301 meters long tanker is 50 meters wide, 26 meters depth, weighing 30,000 tons empty and powered by a 23.60 MW diesel engine. US based National Steel and Shipbuilding Company built this tanker for Exxon Mobil Corporation, a US multinational oil and gas corporation and a direct descendant of John D. Rockefeller's Standard Oil Company. It was built in San Diego, California in 1986.

I submit that GMS was involved in the purchase of controversial European ship SS Blue Lady (ex-SS Norway, SS France) as well. It was allowed beaching on fake humanitarian grounds. It may be recalled that violations of all the legal provisions including Supreme Court’s order was condoned on purported technical ground.

This company was also involved in the Blue Lady case and the dead hazardous US ship Platinum II (ex-MV Oceanic, SS Independence). It was indicted by US Environmental Protection Agency and its latter ship was denied beaching permission by Union Ministry of Environment & Forests but the ministry’s intent was outwitted as the dead ship remained in Indian waters and was illegally scrapped at Gopnath anchorage point in Bhavnagar Gujarat.

I submit that in the past 23 years, Oriental Nicety (formerly Exxon Valdez, Exxon Mediterranean, Sea River Mediterranean, S/R Mediterranean, Mediterranean, and Dong Fang Ocean) has been renamed several times. As per The Washington Post news report, it has worked in at least three areas of the world since it ran aground on Bligh Reef in Alaska's Prince William Sound in March 1989. The 30,000-ton tanker ruptured eight of its 11 oil-storage tanks and spilled nearly 11 million gallons of crude oil into the ecologically rich area. Exxon Mobil spent $30 million to repair the single-hulled ship and moved it to its Mediterranean routes after the US banned the ship from Alaskan waters and a law was passed requiring double hulls on oil tankers.

I submit that European Union regulations too have prevented vessels with single-hull designs such as the Valdez from entering European ports. In 2002, this ship was again removed from service. In 2005, it began operating under the Marshall Islands flag of convenience.

I submit that this oil tanker had spilled hundreds of thousands of barrels of crude oil in Alaska, causing USA’s second largest oil spill. It was listed as the 54th largest spill in history. It is estimated to have caused $15 billion in damages. It caused one of the worst environmental disasters in history.

I submit that in 2008, this ship was sold to a Hong Kong-based shipping company named Hong Kong Bloom Shipping Ltd under Panama registry. In 2008, this oil tanker was converted into an ore carrier.

I submit that its original owner, Exxon Mobil faced litigation from 38,000 litigants. It had pay punitive damages as per US Supreme Court’s order which capped the damages to US$507.5 million in June, 2008. In August, 2008, Exxon Mobil agreed to pay 75% of the US$507.5 million damages ruling to settle the 1989 Exxon Valdez oil spill off Alaska. In June 2009, a federal ruling ordered Exxon to pay an additional US$480 million in interest on their delayed punitive damage awards. It may be noted that as of 2010 there are approximately 98 cubic metres of Valdez crude oil still in Alaska's sand and soil. It is relevant to note that the vessel collided with the Malta-flagged cargo ship, Aali on November 29, 2010 and had to be towed to Longyan Port in Shandong. In such a backdrop, it is essential that Ministry of Shipping coordinate with other agencies to comprehend the antecedents of this hazardous and dead ship.

I submit that a letter of Shri Rajgopal Sharma, Advisor, Indian Embassy, Brussels dated December 20, 2011 has revealed that most of the 200 dead and hazardous ships that are currently at Alang beach are in illegal traffic. This applies to ex-Exon Valzez as well. The letter was based on Shri Sharma’s conversation with Shri Julio Garcia Burgues, Head of the Waste Management Unit, European Commission – DG Environment.

I submit that it is a fact that ships become obsolete after 25 years and most of them are routinely being transferred to Indian waters because of weak shipping, occupational and environmental health and regulations.

I submit that in India, progressive steps like the ones taken in the matter of Sachana shipbreaking plots in Jamnagar district, Gujarat by its closure as per the order of Gujarat government are quite relevant to any probe in the case of ex-Exxon Valdez. Gujarat Maritime Board (GMB) should be asked to urgently submit a report on how was the hazardous ex-Exon Valdez allowed in Indian waters.

I wish to draw your attention towards the order dated November 22, 2011 from the Office of Chief Forest Conservator which reads: “The ship-breaking is termed illegal because this breaking activity is going on in the water of Marine National Park. Unless and until, Government of India gives permission, such activity cannot be carried out in the Marine National Park area because Marine National park Jamnagar is a important sanctuary where marine life of excellent quality live”. The order wants “to cancel the plots allotted of Sachana ship braking yard. These plots are in the land of Forest/Marine Sanctuary”.

The order further reads, “Because of ship-breaking, harmful objects like arsenic, mercury, asbestos, oil, etc could harm marine life in the long time. This leads to complex problems for protecting and conserving the Marine National Park and Marine sanctuary.” These observations are quite relevant for the ship-breaking operations on Alang beach, Bhavnagar as well.

In view of the above and in view of preventive steps taken in USA and Europe, I submit that ex-Exxon Valdez is a test case for the robustness of India’s regulatory framework Your ministry must ensure maritime security and environmental security of the country which has been compromised as per your admission in the Parliament. The steps must include ways to pierce through the corporate veils of shipping companies.

Therefore, a probe ought to be ordered to get to the bottom of illegal traffic of this dead ship and steps be urgently initiated to stop its scrapping on Alang beach besides investigating the possibility of fake documents which came to light in the earlier case of Platinum II, a US ship.