skip to main | skip to sidebar
Home » » Cursed by Resource 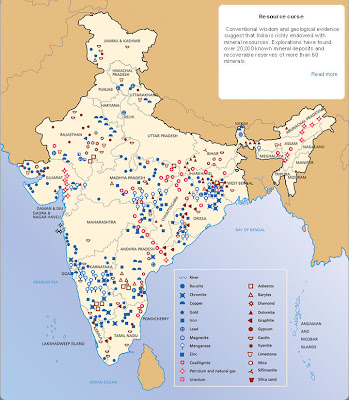 Sharing the Wealth of Minerals

Conventional wisdom and geological evidence suggest that India is richly endowed with mineral resources. Explorations have found over 20,000 known mineral deposits and recoverable reserves of more than 60 minerals.

If India’s forests, mineral-bearing areas, regions of tribal habitation and watersheds are all mapped together (navigate from the menu, above), a startling fact emerges – the country’s major mineral reserves lie under its richest forests and in the watersheds of its key rivers. These lands are also the homes of India’s poorest people, its tribals.

The mining industry has been hard-selling dreams – of development, employment and growth. But, things appear to be different. Mining is linked with poverty, poor development outcomes and low economic performance. Of the 50 major mining districts, 60% figure among the 150 most backward districts of the country.

Mining-dependant states such as Jharkhand, Chhattisgarh and Orissa, demonstrate low per capita incomes as compared to states which do not depend completely on their mineral wealth (examples include Tamil Nadu, Maharashtra and Gujarat). Mineral-dependent states also have higher levels of poverty, lower growth rates and higher levels of mortality, malnutrition and morbidity.

Employment
Mining means progress: so believe the Indian government and industry. Mining would bring jobs, and jobs would usher in prosperity.

However, mining offers fewer jobs now, with small-scale and public sector mining, both mass employers, systematically being replaced with large-scale, privately-owned, mechanised mines. This has led to a massive dip in employment.

The formal mining industry in India employs just 5.6 lakh people and this number is coming down. Between 1991 and 2004, the number of people employed in mining came down by 30%, but the value of mineral production went up four times.

Average forest cover of the 50 major mineral producing districts is 28 per cent. The national average of forest cover in each state is 20.6%.

Tribals live in almost half of the 50 mineral-producing districts

Naxalism-affected area has now spread to 40% of the mineral-rich districts in the top six mineral-producing states.

In 2006 - 1.84 billion tonnes of waste was generated from mining of major minerals

80% of total waste generated is from coal mining. 3-4 tonnes of wastes is generated for every tonne of coal extracted.

80% of total mining accidents are from coal mines.

In focus: The mining industry
Globally, the mining industry is in boom time. World prices of minerals, ores and metals have soared to record levels, a trend that began in 2002 with unprecedented demand from China. In 2006 alone, global prices of all minerals skyrocketed up 48%.

Indian mining is characterised by a large number of small mines, dominated by the public sector, which accounts for 75% of the total value of mineral production. Mining policy is pushing the industry to move toward privately owned, large-scale, mechanised mines. Foreign direct investors and multinational mining companies are being welcomed.

After services and manufacturing, the mineral sector in India is fast emerging as the next boom sector, with the burgeoning Chinese demand driving up prices. In India, the value of mineral production has more than tripled since the sector was ‘liberalised’, from about Rs 25,000 crore in 1993-94 to more than Rs 84,000 crore in 2005-06, an astounding growth rate of 10.7%. Production of coal, lignite, natural gas, bauxite, chromite, iron ore and limestone has been ramped up.

However, mining’s contribution to the nation’s GDP is stagnating at a mere 2.2-2.5% for more than a decade now. The sector contributes very little to the exchequer through royalties and taxes -- minerals are cheap, and royalties low. Also, royalties are rarely used for the benefit of the mined regions.

India produced 90 minerals in 2005-06, valued at an estimated Rs 84,211 crore. Fuel minerals – coal, lignite, crude petroleum & natural gas – constitute about 73% of the total value of minerals produced in the country. However, the contribution of fuel minerals is steadily dipping over the years.

Metallic minerals are the next biggest contributors to the total value of minerals, and are the fastest growing segment of the mineral industry in India, with a compounded annual growth rate of 30%, among the highest in the world. Iron ore alone contributes three-fourth of the total value.

Minor minerals, mainly sand, gravel, brick, earth and stone, are also important contributors (about 10% of the value of minerals produced in the country, although data is difficult to come by).

Non-metallic minerals are minor players in the Indian minerals sector in terms of value, though they are big both in terms of area under mining and volume of minerals produced; their contribution to the value of total minerals produced in the country has remained at about 3.3 to 3.4% in the last few years. Limestone constitutes about two-thirds of the total value.