We Are 99%, will no longer tolerate greed & corruption of the 1% 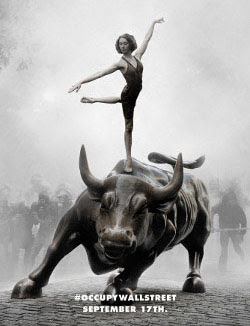 Occupy Wall Street movement for democracy has begun in USA on September 17 with an encampment in the financial district of of New York City, today is the 10th day of the movement.

Its mission is to see 20,000 people to flood into lower Manhattan, set up beds, kitchens, peaceful barricades and occupy Wall Street for a few months in keeping with the efforts of brothers and sisters in Egypt, Greece, Spain, and Iceland, it plans to use the revolutionary Arab Spring tactic of mass occupation to restore democracy in the USA. It claims to be a leaderless resistance movement with people of many colors, genders and political persuasions.

The one thing we all have in common is that "We Are The 99% that will no longer tolerate the greed and corruption of the 1%." The original call for this occupation was published by Adbusters in July; since then, many individuals across the country have stepped up to organize this event, such as the people of the NYC General Assembly and US Day of Rage. There will be similar occupations in the near future such as October 2011 in Freedom Plaza, Washington D.C.
Share this article :