Waste to Energy Project Not So Green 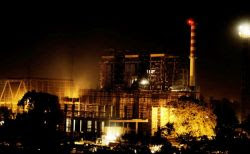 The new waste burner dominates South Delhi.
By Ranjit Devraj
A waste-to-energy (WtE) project in the heart of the Indian capital and run by a powerful industrial family is testing the enforceability of the country’s environmental and zoning laws.

The WtE project, being promoted by Jindal Ecopolis—owned by the Jindal family that is close to the ruling Congress party—will, when fully operational, burn 4,000 tonnes a day of refuse derived fuel (RDF) made from municipal waste, to produce 20 megawatts of electricity.

Like many dirty industries rapidly coming up across the Indian landscape, Jindal’s WtE project may have gone unremarked, except that it is located in the Okhla area of South Delhi, reckoned as among the most affluent of India’s 604 districts and populated by people acutely aware of their rights.

Environmentalists say the plant has violated zoning regulations, the Delhi Master Plan, rulings by the Supreme Court and rules laid down by the Ministry of Environment and Forests (MoEF) and the Central Pollution Control Board (CPCB), a statutory body.