Subject: Public Hearing of the Renewal of the UCIL Bhatin Uranium Mines Lease held on 26.5.2011

The State Pollution Control Board has declared that the public hearing held today on 26.5.2011 for renewal of the UCIL Bhatin Uranium Mines Lease has been a “success” and the villagers affected by the project have given the green signal to the project, thereby giving the project life for another 29 years. 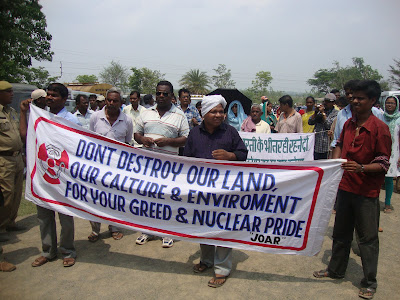 This is far from the truth. As in the past the UCIL once again in collusion with the State Pollution Control Board, the local administration and police and paramilitary forces has managed to get away from its liabilities as a public corporation as smoothly as can be. The public hearing has been declared to be a success without taking on record any dissenting opinion on the EIA/EMP Report, any discussion on the environmental and health impacts of uranium mining. 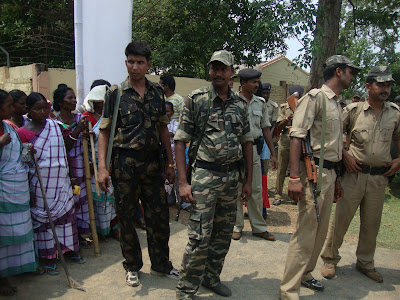 The UCIL has indulged in gross malpractice and has taken advantage of the poverty of the people and their dependency on the company for livelihood, and has mobilized villagers most of whom are illegal contract workers to support their mining projects. The UCIL has distributed washing machines, sewing machines, sarees to allure the villagers, and manipulate the public hearing.

The UCIL ever since its inception has indulged in propaganda that people, organizations and movements that raise the issues of radiation, environment and health concerns are not concered with the peoples needs of livelihood. Hence the UCIL is responsible for not allowing any public debate on environmental and health concerns that arise out of uranium mining. The UCIL a day before the public hearing once again attempted to defame earlier studies made which establish the adverse impacts of uranium minig on health and environment. All efforts made to raise public consciousness and create a debate have been obstructed. JOAR made efforts to create awareness through pasting posters in public places, and distributing books, the UCIL management stooped low enough to declare to give monetary reward to those who tore down the posters. 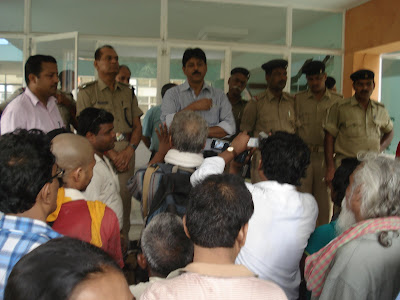 Once again the UCIL shamelessly used the poor villagers who are dependent on mines for livelihood as their defence against those who are opposed to the mining project, and are well aware of the falsities of EIA/EMP report. Several persons paid by the company to obstruct the hearing cordoned off the premises of the public hearing and several people were not allowed to enter in particular those who sought to question the EIA/EMP report. 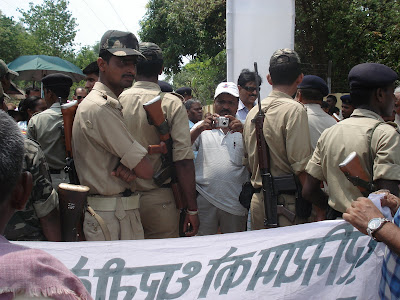 The police and the local administration blatantly refused to intervene and maintain a congenial environment for the public hearing. The police and the local administration resorted to making callous remarks such as “we cannot do anything, the people of the village don’t want you to go inside”. This is absolutely shocking. Even several media persons were prevented from entering the premises, this is the first instance of hte media being denied access. Journalists from the Hindu, Dopwn to Earth, Statesman, even the local media were not allowed. . Drunk men were not allowing vehicles to get to the spot of the public hearing. Hence it is absolutely clear that the public hearing was a complete farce and the role of the State Pollution Control Board, local police and administration is highly questionable. An immediate inquiry must be conducted on these complaints, and the various public authorities must be held responsible for the abdication of their responsibility and the illegal collusion with the UCIL. The public hearing held must be cancelled and a fresh public hearing be organized. 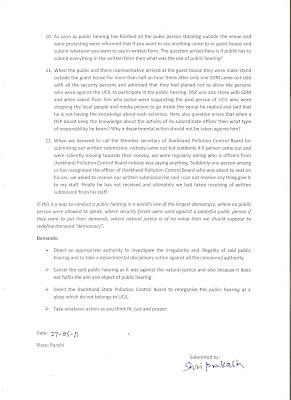 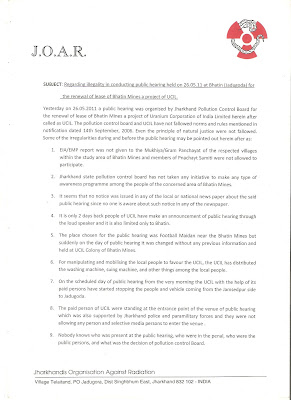 Further the State Pollution Control Board, and the local administration did not fulfill any of its duties of circulating the draft EIA report/summary report, the report was not even given to the panchayat mukhiya. The villagers were not even informed of the date of the hearing. The newspaper report stated that the public hearing would be held in the Bhatin football ground, however it was finally held at the Bhatin UCIL Colony. It can be guaranteed that no person in any of the villages affected by the mining project is aware of what the EIA report states. Ironically the SDM, who was on the panel that chaired the public hearing has stated on record before media persons that he himself has not read the EIA report.

The so called success of today's public hearing and the manipulated public support is likely to be used by the government as an example to site before the people of Meghalaya, Karnataka, and other parts of the country where uranium mining projects are pending. This is an attempt to silence peoples movements, and question their credibility. We therefore demand an end to this farce and we demand a fare and impartial public hearing.