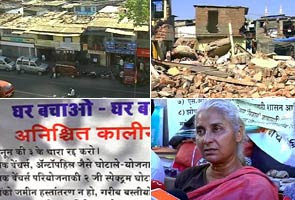 On 20th May, Medha Patkar and nearly 50 people from other bastis of Mumbai were on their way to the Golibar area. They had letter written to Maharashtra CM Prithviraj Chavan (given below) pointing out constant violation of the laws and open support to the Shivalik Ventures. Medha Patkar and others have started INDEFINITE HUNGER STRIKE.

I was in Mumbai for giving testimony to People's Tribunal on Nuclear Energy. I met the villagers from Jaitapur who were angry with the Prithviraj Chavan's callous regard towards the potential catastrophe from the proposed nuclear power plant despite Fukushima nuclear disaster.

I met Medha Patkar and her comrades in Golibar, Mumbai on the second day of her fast. The slum dwellers Devan Nair, Bharti Mishara, Noor Jahan, Lala Jaklu Kale, Gurprit Singh were also on fast.

I got to know that there was a police lathi charge on 19th May by Maharashtra Police to protect the interest of the real-estate agents. Sunita Gurav suffered a grave head injury and Sharadabai Vasta, 80 years old mentally ill lady was ruthlessly dragged out of her house. These slum dwellers and their colonies have settled here for last 70-100 years and are not encroachment slums. It is evident that section 3 (K) of the Maharashtra Slum Areas Act, 1971allows 'developers' (builders) to bypass the 70 per cent consent norm in the initial stages of development. Under the law for any government to develop a slum, it must take the consent from its dwellers. 3K rule in slum act bars the privilege. In Maharashtra, it is a long back rule which is not used till recently is utilized to provide builders slum area to 'develop'. This rule empowers government to give right to 'develop' the slum area on first come first basis to any developer and for this it has authority to give instructions to Slum Rehabilitation Authority (SRA). The government can also direct the SRA to hand over the slum land for redevelopment to a builder without inviting tenders under the 3 K clause.

It is noteworthy that using this 3 K clause, Maharashtra government has gifted more than 500 acre of slum land to 6 'Developers' in last 2 years. Golibar residents have revealed the dubious nature of the 3 K Clause. Instead of protecting them, state govt has been making efforts to evict them. It has emerged that Slum Rehabilitation Scheme is being used for land grabbing by builders/'developers'. There is a compelling logic for scrapping of 3 K clause. Prithviraj Chavan's insensitivity and callousness has compelled the slum dwellers and Medha Patkar to undertake painful route of indefinite hunger strike. Does Prithviraj Chavan and his party president Sonia Gandhi realize the meaning of being hungry for 8 days? Have Chavan or Sonia Gandhi ever been on fast for a public cause?

It is clear by now that Shivalik Ventures, the builder has changed its name many times (e.g. SVI Realties, Shivalik Ventures, Shi. Ventures Private Ltd., Lifestyle Realty) and has committed serious criminal offences. The letter of the Directorate of Income Tax also exposes that UNITECH has made 50% of the investment. It was done from the collection of advances through Neera Radia. There is a case for Joint Parliamentary Committee making inquiry into the 2 G spectrum scam to examine the role of Shivalik Ventures as well.