Angry Rally Against Incinerator based Waste to Energy Projects 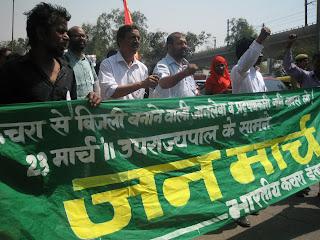 Angry Rally Against Incinerator based Waste to Energy Projects
Such Hazardous Technologies, a Threat to Livelihood & Health
Nuclear Energy Cheaper Than Waste to Energy says, USEPA
Mere shifting of location of the hazardous technology based plant not enough, such technologies should be abandoned
New Delhi, 23 March, 2011: On the 23rd of March 2011 waste pickers marched from Delhi's Kudeshiya Park (near ISBT) to Lt. Governor Office to demand the immediate stoppage of the waste-to-energy plants in Delhi at Okhla- Timarpur (16 MW) and Gazipur (10 MW). Notably, a US Environmental Protection Agency (USEPA) report available on its website observes that the energy generated from municipal waste is costlier than nuclear energy.
The rally was planned today to celebrate the martyardom of Shahid Bhagat Singh, the tallest revolutionary freedom fighter of the country.
Environmental and labour groups have been protesting against these plants since March 2005 and have been joined in by the affected local residents. The plants which got environmental clearance during the tenure of A Raja as Environment Minister are highly suspect and deserve to be reviewed and cancelled.
The proposed polluting technology to deal with the waste from South Delhi, North West Delhi and East Delhi is fraught with disastrous public health consequences for which two companies namely, Timarpur-Okhla Waste Management Company (TOWMCL) and the Unique Waste Processing Company (subsidiary of IL&FS Infrastructure Development Corporation Limited) have been set up. The Timarpur-Okhla carbon credit project was registered on 10th November, 2007 with a claim to reduce greenhouse gases to the tune of 262,791 metric tonnes CO2 equivalent per annum. Unique Waste Processing Company, a subsidiary of Infrastructure Leasing and Financial Services (IL&FS) and Andhra Pradesh Technology Development Centre (APTDC) has incorporated Timarpur-Okhla Waste Management Company for developing the project for processing municipal waste and also to produce electricity at two locations namely Timarpur and Okhla, at the site at Okhla that is adjacent to defunct Okhla Sewage Treatment Plant (STP).
TOWMCL is working with New Delhi Municipal Council (NDMC) and MCD. The Timarpur and Okhla plant will together be processing 650 tonnes per day of MSW at Timarpur site and 1300 tonnes per day of MSW at Okhla and claims to generate 16 MW of electricity. The Gazipur plant will process 1300 tonnes per day of MSW and claims to generate 10 MW of electricity.
It is scientifically established that the plants will emit hazardous pollutants, such as dioxins, which will eventually enter the food chain. Government cannot be allowed to experiment with Delhi’s health. These incinerators are coming up in clear violation of Supreme Court rulings on such plants. “In 2007 the Supreme Court allowed five pilot plants on an experimental basis and that too based only on biological treatment rather than incineration.”

The Supreme Court’s ruling is supported by the White Paper produced by the Ministry of Environment and Forests, stating, “The government claims that this plant will generate electricity, but it will only generate dioxins and other toxic emissions.” Comtroller Auditor General of India (CAG) and Delhi High Court have rebuked the concerned ministries for treating Delhi citizens as guinea pig for experimental technologies that have been tried and have failed.

In such a backdrop, Waste pickers have marched along with Residents, Citizens, Civil society groups, Human rights associations, Environmentalists, Students, Social Activists, NGOs, Trade Unions demanding stoppage of toxic waste to energy plants in Okhla, Timarpur and Gazipur.THEIR DEMANDS ARE AS UNDER 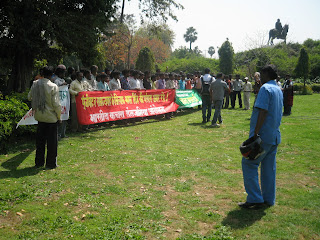 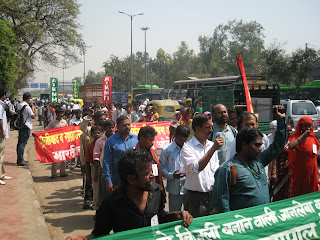 A delgation of wastepickers went to meet the Lt Governor who had deputed Ms Padmini Singhla, Additional Secretary to LG for recieving the petition from the waste pickers. She heard the gnawing concerns of a Dioxins emitting technology and informed the delegation comprising of TOXICSWATCH ALLIANCE, All India Kabadi Mazdoor Mahasangh and other partcipating organisations that Mr Sanjiv Mittal, OSD to LG will look into the matter and apprise the LG. It has reliably been learnt that Prime Minister has asked the LG to look into the matter and Union Environment Minister has asked Delhi Chief Minister to attend to the concerns of the residents against the toxic plants.
For any enquiries call: Shashi Bhushan Pandit, Secretary, All India Kabadi Mazdoor Mahasangh (AIKMM), Mb: 9968413109, Gopal Krishna, Convener, TOXICSWATCH ALLIANCE, Mb: 9818089660, E-mail: krishna2777@gmail.com, Asha Arora, Member, OKHLA ANTI-INCINERATOR CAMPAIGN COMMITTEE, Mb: 9711408421, E-mail: okhlakaghosla@gmail.com, Anant Trivedi, Resident, Eshwar Nagar, Mb: 9868502292, Arif Khan, Resident, Hazi Colony, Mb: 9891519844,
Web:http://toxicswatch.blogspot.com/2011/01/toxic-municipal-waste-to-energy-wte.html
http://www.facebook.com/#!/pages/Okhla-ka-Ghosla/112310532173391
Share this article :