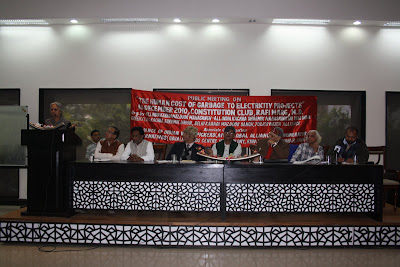 Condemning the apparent shift and U turn in the statement of Jairam Ramesh, Union Minister for Environment and Forests (MoEF), Government of India at Cancun, Mexcio in the 16th Conference of Parties to the United Nations Framework Convention on Climate Change (UNFCCC), a public meeting the Constitution Club, New Delhi rejected false solutions like carbon trade for the climate crisis. 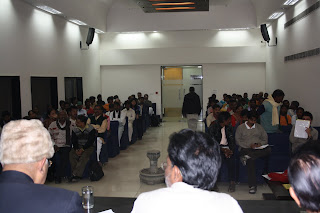 At the public meeting on the “Carbon Trade Fraud and Human Cost of the Garbage to Electricity Projects” D Raja, Member of Parliament, Communist Party of India criticized the government for saying “All countries must make binding commitments in appropriate legal form.” Speaker after speaker at the meeting expressed its outrage at the Minister’s statement.

Most recently, it has reliably been learnt that Asian Development Bank (ADB)'s Asian Pacific Carbon Fund (APCF) has dropped the Timarpur-Okhla incineration based waste to energy plant out of its portfolio. But the construction of the plant is still underway. Sadly, now given the fact that Delhi High Court that heard the matter on 15 September, 2010 has posted the matter for hearing on 15 January 2011, we request the Parliamentary Committee to intervene urgently to protect the residents of Delhi from highly polluting plants.

There is massive opposition to the Timarpur-Okhla Waste to Energy project that has met with protest rally from the residents of Gaffar Manzil, Sukhdev Vihar and Hazi Colony together. Over thousands of people have walked through the colonies in a procession to stage their protest. 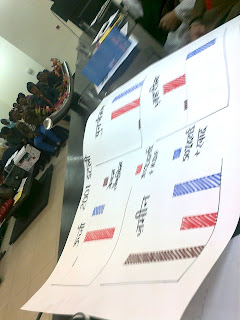 Waste incineration systems (including waste pelletisation, pyrolysis and gasification systems) produce pollutants, which are detrimental to health & environment. It is expensive and does not eliminate or adequately control the toxic emissions from today's chemically complex municipal discards. Even new incinerators release toxic metals, dioxins, and acid gases. Far from eliminating the need for a landfill, waste incinerator systems produce toxic ash and other residues. Such projects disperse incinerator ash throughout the environment and subsequently enter our food chain.

Gopal Krishna of Toxics Watch Alliance exposed the nature of carbon trade and how it is a fake solution for the climate crisis. These waste to energy projects are being promoted in manifest violation of international environmental norms. Incineration of waste violates Kyoto Protocol because as per the Protocol waste incineration is a greenhouse gas emitter. The sad plight at waste to energy site in Gandhamguda village in Ranga Reddy district of Andhra Pradesh (wrongly mentioned as Hyderabad project) which had the same technology was mentioned. While the RDF incinerator was in operation, the village was covered by a heavy shroud of dark smoke. Originally a pelletisation plant with a furnace, After the plant came up, local doctors started detecting case of problems not found before— skin rashes, asthma, respiratory problems and some cases of stillborns.

Shashi Bhushan Pandit of All India Kabadi Mazdoor Mahasangh said, Waste to energy plants costs cities and municipalities more and provides fewer jobs than comprehensive recycling and composting. It prohibits the development of local recycling-based businesses. We demand closure of this combustion based project for a just transition from burning waste to building a better, cleaner future for the residents of Delhi.

Notably, while 'whether or not energy from mixed municipal waste (with hazardous characteristics) is a driving concern' remains in dispute, the Prime Minister’s National Action Plan on Climate Change (NAPCC) categorically refers to Biomethanation technology, a biological treatment method for waste to energy instead of the Refuse Derived Fuel (RDF) process which is a incineration technology and is a tried, tested, failed and Dioxins emitting technology.

Even Municipal Corporation of Delhi (MCD)’s own Feasibility Study and Master Plan for Optimal Waste Treatment and Disposal for the Entire State of Delhi of March 2004 says, “Incineration of RDF is considered waste incineration.” (Page 25, Appendix D, Technology Catalogue). It also says the costs of RDF are often high for societies with low calorific value because energy is used to dry the waste before it becomes feasible to burn it.

In fact the Master Plan Report (2020) of Municipal Corporation of Delhi (MCD) itself says, “RDF is often an option when emission standards are lax and RDF is burned in conventional boilers with no special precautions for emissions.” One is surprised that despite this observation the report then goes on to suggest RDF. In fact the MCD report itself says that RDF is another form of incineration.

The proposed polluting technology to deal with the waste from South Delhi, North West Delhi and East Delhi is fraught with disastrous public health consequences for which two companies namely, Timarpur-Okhla Waste Management Company (TOWMCL) and the Unique Waste Processing Company (subsidiary of IL&FS Infrastructure Development Corporation Limited have been set up. The Timarpur-Okhla carbon credit project was registered on 10th November, 2007 with a claim to reduce greenhouse gases to the tune of 262,791 metric tonnes CO2 equivalent per annum. Unique Waste Processing Company, a subsidiary of Infrastructure Leasing and Financial Services (IL&FS) and Andhra Pradesh Technology Development Centre (APTDC) has incorporated Timarpur-Okhla Waste Management Company for developing the project for processing municipal waste and also to produce electricity at two locations namely Timarpur and Okhla, at the site at Okhla that is adjacent to defunct Okhla Sewage Treatment Plant (STP). TOWMCL is working with New Delhi Municipal Council (NDMC) and MCD. The Timarpur and Okhla plant will together be processing 650 tonnes per day of MSW at Timarpur site and 1300 tonnes per day of MSW at Okhla and claims to generate 16 MW of electricity.

Prof S S Khanna, former Senior Advisor, Planning Commission said, hazardous technologies should not be adopted there are biological methods to deal with waste management through material recovery and by recycling. The Inter-Ministerial Task Force on Integrated Plant Nutrient Management did not encourage WTE policy and has recommended setting up of 1000 compost plants all over the country.

Dunu Roy of Hazards Centre, The incentives and subsidies should be offered in areas of `cold' technologies alone, which are suited to our country economically, socially and also to our wastes.”

Devendra Baral of Bal Vikas Dhara said, “because of corporatisation of waste, some 2 lakh waste pickers arte losing their livelihood. Government should change its anti-poor policy”.

In the context of misguided waste incineration plants aimed at earning carbon credits as a solution for climate crisis, B. Sengupta former Member Secretary, Central Pollution Control Board referred to the order of Supreme Court which had sought closure and shift of all such polluting plants from the residential areas. Mr. Anil Mishra from Residential welfare Association, Sukhdev Vihar blamed the policy of the central and Delhi government. 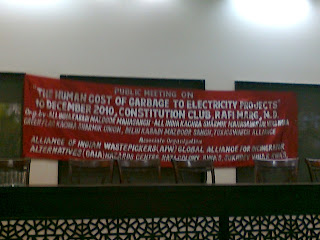 There was a resolution adopted by the participants stating:

1. That the fake public hearing and fake environmental clearance to these waste to energy project of Okhla was given when A Raja was the Union Minister for Environment & Forests, the same should be cancelled immediately

2. Central government and State Government must take cognizance of the threat to waste pickers’ livelihood. Therefore, municipal waste should not be handed over to companies.

3. That the proposed waste to energy plants in Timarpur, Sukhdev Vihar (Okhla) and Gazipur must be stopped with immediate effect and high cost routes for waste management must be avoided and instead only appropriate methods such as small-scale bio-methanation, composting and proper recycling be propagated.