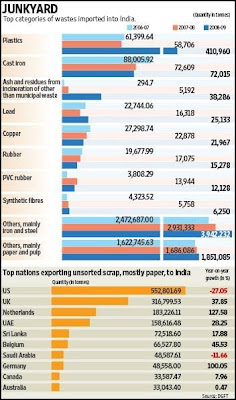 India’s waste imports are booming in the shadow of lax controls and feeble security, with ports poorly equipped to handle the amount of scrap that comes flooding in on container ships. But inspection may get tighter, thanks to a US law requiring the scanning of all cargo bound for that country

New Delhi/Bangalore: In 2008-09, India imported 104,742 tonnes of “unsorted waste and scrap” under the “unspecified” country category, according to the Directorate General of Foreign Trade (DGFT). Which is another way of saying nobody really knows where the material came from or its exact contents.

The lack of accurate data on India’s import of waste and scrap betrays the lax monitoring of what passes through our border checkpoints. From iron and steel scrap, PVC waste, PET bottle scrap, incinerated municipal ash to waste pharmaceuticals, data show that India imports all kinds of waste from almost everywhere around the world. Even while experts and officials scurry to find the source of radioactive Cobalt 60 that turned up in a Delhi junkyard recently, DGFT classification indicates that there could be hundreds of tonnes of unsorted and uncategorized scrap and waste in the country.

A commerce ministry official, who did not want to be identified, said that imports from unspecified countries could mean that either importers did not provide the information, the forms were mutilated or that imports from a few small countries were clubbed together. The official did not explain what unsorted waste and scrap could constitute.

Tracking or monitoring what enters through ports is equally nebulous, mainly due to lack of hardware, resources and pressure to clear consignments.

None of the 12 Centrally owned ports, with the exception of Jawaharlal Nehru (JN) port, near Mumbai, have scanners capable of detecting arms, ammunition and radioactive substances in containerized cargo imported into India.

These 12 ports account for three-fourths of India’s external trade shipped by sea. Some 95% of India’s overseas trade by volume and 70% by value move by sea.
“There are no facilities at government-owned ports for screening radioactive materials coming into the country in steel containers carrying cargo,” said G.D. Lohani, additional commissioner of customs (imports) at Nhava Sheva near Mumbai that has jurisdiction over containers imported through JN port.

Selective scanning
This, India’s busiest container port, is currently the only one in the country that has installed scanners to screen containers. It has two of them—one mobile scanner operating at the port and the other installed at a container freight station owned by the state-run Central Warehousing Corp. Ltd, some 4km from the port—both operated by the customs department.

“Even with these two scanners, it is not possible to screen all import containers landing at JN port. Scanning is done only selectively,” said Rajan Chaudhary, additional commissioner of customs, looking after imports at Nhava Sheva. For instance, containers originating from Pakistan are examined “one hundred per cent” on arrival.

Only 10% of containers imported through JN port are scanned, chosen at random by the electronic data interchange (EDI) system at the port, a JN port official said.
Export containers are not scanned at all but goods are subjected to inspection and examination by customs and excise officials before they are loaded, the port official said, requesting anonymity because he’s not authorized to speak to the media.

“Proposals are being worked out to install more scanners at JN port as well as other ports. But this equipment is very expensive,” said Chaudhary.

Increased threat perceptions from terrorists have prompted the Union government to speed up efforts to acquire gamma ray scanners that are capable of detecting arms and radioactive substances in containerized cargo, according to a Union shipping ministry official.

The customs department has also sought government approval to install at least two scanners (one mobile and one fixed) each at Chennai, Tuticorin, Cochin, Kandla, Kolkata, Paradip, New Mangalore, Mormugao, Visakhapatnam, Mundra, Pipavav and Mumbai ports. Each such scanner costs between Rs25 crore and Rs50 crore, depending upon specifications.

Separately, India will have to spend a few thousand crores of rupees to buy and install equipment that scans cargo containers bound for the US from its ports, to comply with a new law in that country that will come into force in 2012.
Without such investments and a change in inspection regimes, Indian ports risk being on the list of those excluded from shipping containers to the US under the Law on Maritime Cargo Scanning Requirements called the Greenlane Maritime Security Act that was signed into law in August 2007.

The US department of homeland security (DHS) has decided to postpone by two years the deadline to scan all US-bound container vessels at foreign ports, as stipulated under the 2007 law.

A DHS official cited non-availability of technology and software that can automatically detect suspicious anomalies in containers, logistical challenges and a shortage of DHS manpower to view images as key reasons for the extensions.
US homeland security secretary Janet Napolitano admitted to Congress recently that the 2012 deadline for all US-bound boxes to be scanned probably cannot be met.
Container terminal operators say that scanning each and every container will hit productivity and lead to delays in clearing cargo.

“But if it is for the safety of citizens and security of the country, we will have to enforce the government’s directive on this,” said Senthil Kumar, terminal manager at the container terminal run by a consortium of ABG Infralogistics Ltd and Singapore’s PSA International Pte Ltd at Kandla in Gujarat.

He, however, said it was the responsibility of the government-owned ports and the customs department to install the scanning equipment.

According to Kumar, scanning import containers as soon as they land would be difficult. “But if the government tells us to receive the containers, store and scan them before delivering to customers, it is fine for us,” he said.

In such a case, there will only be a delay in delivery to customers, but vessel productivity will not be hampered. “The objective of a container terminal is to ensure faster turnaround of vessels,” Kumar said.

Sanitizing cargo
Imports also have to be certified by a third party agency (known as a pre-shipment inspection or PSI certificate), which has to ensure that consignments are free of any type of arms, ammunition, mines, shells, cartridges or radioactive contamination.
There are about 90 international agencies, listed with DGFT, that have been given the authority to examine and certify the cargo that is being imported into India. An importer requires a certificate from any one of them for cargo that’s being imported.

In the rare instances that anomalies are detected in cargo coming into India, these agencies can have their licence cancelled. After a spate of accidents involving scrap metal containing explosives in 2005, DGFT delisted eight such agencies.
Worldwide Logistic, Survey and Inspection Group (WLSI) was one of the companies whose PSI certificates were temporarily derecognized by DGFT for issuing “false certificates” and for the recovery of ammunition from imported metal scrap that they had certified.

For reasons that are unclear, DGFT only derecognized the certificates issued by the US branch of the company (the company also has branches in India, the UK and Australia).

Dinesh Aneja, one of the two “principals of the company”, says DGFT decision in the case is still pending. “They only found a few items that looked like cylinders in the cargo we had certified,” he said.

DGFT has allowed the company to resume operations on the condition that the cargo they certify “will be rechecked on landing in India”, he said.
In the meantime, the company, which according to their website is incorporated in the US, has shut its office there, and now issues certificates from its Australia office.

DGFT has now notified that, from 30 March, shredded metal scrap (exempt earlier) will also need to get this certificate because of the increasing amount of contaminated metal scrap entering the country.

Ranveer Jaidka, who runs a plant that manufactures alloy steel ingots from metal scrap in Mandi Gobindgarh, Punjab, says even in cases of contaminated scrap or accidents due to explosive material, importers hardly have any recourse.

“We usually buy imported scrap through brokers and traders, who deal directly with the exporters in other countries and it is wholly their responsibility, not ours. It is not possible or feasible for us to track them down or take them to court. At max, we can complain,” said Jaidka.

Asit Ranjan Mishra in New Delhi contributed to this story.

Based in India, Udehra Mechanical Works is a prominent manufacturer and suppliers of huge variety of high tensile industrial fasteners like nuts and bolts which are supplied to our reputed clients.

Eros trading has spent significant time in plastics and material in worldwide business sector. We likewise manage materials squanders, for example, manufactured clothes, cotton clothes, shoddy and synthetic fiber. We are concentrating on how best to diminish, reuse and reuse plastics, house hold waste and Industrial waste of environment. We focus on making the world awesome by just recycling your waste to better product and making world healthy to live in.
We can make shipments anyplace around the world and are committed for quality product in best price. Our organization is situated in INDIA and we likewise supply plastic scraps. We cover scrap materials chiefly LDPE , HDPE , PVC , PP , ABS , PBT , and so forth.

Thanks for this post is very informative and interesting.all the points are very useful. Simple but very effective writing. Thanks for sharing such a nice post.