Kyoto Protocol Does Not End in 2012

"We are not talking about the successor of Kyoto Protocol" 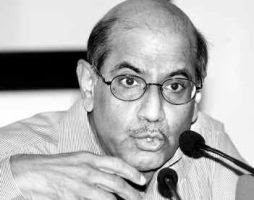 Annex-1 countries like US, EU and others are ignoring the equity issues in order to protect their lifestyles' said the Prime Minister's Special Envoy on Climate Change Shyam Saran gave a briefing to the Indian NGOs present in Bangkok climate talks.

Amid efforts by developed nations and their powerful corporate media to muddy waters with an ulterior motive of diverting attention, Saran reiterated the obvious aspects of Kyoto Protocol like how it is not the Protocol but the first commitment period under the Protocol that ends in 2012.

Ad Hoc Working Group on Further Commitments for Annex I Parties under the Kyoto Protocol (AWG-KP) is meant to undertake the task of post 2012. Second commitment period starts in 2013.

Ad Hoc Working Group on Long-term Cooperative Action under the Convention (AWG-LCA) is meant for those who are not parties to the Protocol like US wherein they are required to make commitments comparable to the ones in the Protocol.

The Protocol is a legal document an dit remains a legal instrument until is abrogated or modified.

He underlined that 'The industrialised countries keep talking about how the large populations in India and China are using up the world's resources. I remember once when it happened, an African delegate got up and quoted from a World Bank report to show that an American or a European child uses 30 times as much natural resources as a child from Africa'.

The most important issue is that in the negotiations whether or not the developed countries are able to come up with very clear and significant target for reduction of their emissions, on which all parties so far have not been able to get to an agreement.

On the issue of financing, he said. "If developing countries are expected to take on additional responsibilities beyond what we are already doing, then unless there is a clarity about the amount of finances which will be available, unless there is a clarity about technology transferred, it will be very difficult for them to really take forward their own climate adaption plans."

Talking about the steps India has made recently to tackle the climate issue, he said, "what we have agreed is that whatever we are going to be doing domestically, whatever targets we are going to put on ourselves, we can report to UNFCCC...that is a positive step forward we have made."

With missions that cover both the aspect of mitigation as well as the aspect of adaptation, "what we have said is that in each of these missions, whenever possible, we will set domestic targets that we would want to achieve by certain dates. that is part of the planning process."

As far as our voluntary actions are concerned, and whatever we are able to do within the limitation of our resources, we will be very happy to report to the international community as is required under the UNFCCC.

"We, no matter India, China or any other developing countries, have made it very clear that the main responsibility for the emissions is that of the developed countries, because they have historical responsibility. The climate change is not taking place because of the current emissions, but because of the accumulated greenhouse gas emissions during many years of industrial activities in the developed countries, who have, in the UNFCCC, acknowledged their responsibilities. The first unusual business is they (developed countries) must take the lead in reducing their emissions. This does not mean that developing countries, just like India and China, don't have their own responsibilities. Of course we have, but that's because we are the ones that will be most affected by climate change. So we are quite clear about our responsibility to pursue sustainable development. China is doing that; India is doing that," Saran said. Adding that "We are already spending a very large part of our national resources for adapting to climate change, for which we are not responsible."
Share this article :