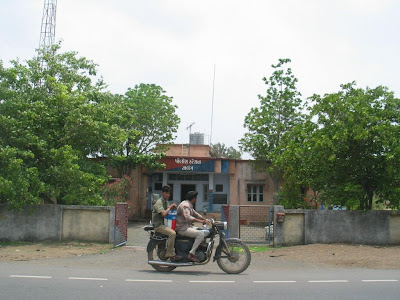 Six labourers were burnt alive in an engine room at Alang ship breaking yard today morning.(Alang Police Station in picture) An incident of fire happened on plot no. 24 in the morning at Alang. Earlier, International Maritime Organisation led delegation has certified Alang beach as a safe place for hazardous industrial activity like ship dismantling. 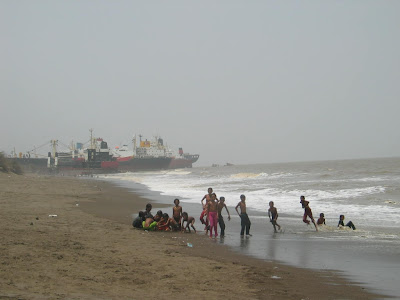 After fire brigade rushed to the place and did its job, six bodies of laborers were found inside the engine room. The body of one worker could not be identified, the other five were identified as Dinesh, Dipak, Sanjay, Munna and Tulsi.

It is being said that the incident took place when some workers of Alang Auto & General Engineering Co. (P) Ltd were cutting down the engine portion of ship ‘M S Jesica’ in the world’s largest ship scrapping yard. The fire officials took almost three hours to douse the blaze. The exact cause of fire is yet to be ascertained.

The company is owned by Udai Agarwal and Abhinav Kumar

Such things happen in a routine manner. Environment Secretary headed Supreme Court-appointed committee in its report has revealed that the fatal accident rate in Alang is in the range of 2 per 1000 as opposed to 0.34 per 1000 in the mining industry (which is considered worst in the industrial sector).

Two fatal accidents have been reported from the world’s largest ship-breaking yard in May and June 2009. The earlier accident that occurred on the 1st June, 2009 on Plot 15 of the ship-breaking yard involved a labourer identified as Ayodhyasingh Rajput. Such fatal accident occurred at Plot 24 D in May, 2009 as well. Similar accidents were reported in earlier months and years as well.

The industrial activity must be taken off the Alang beach to protect these dying workers and the coastal environment. The currently practiced “beaching method” whereby obsolete ships are run aground on ocean beaches for cutting and breaking apart in the intertidal zone can never be accomplished in a manner which is environmentally sound or protective of human health. Careful analysis of the intrinsic characteristics of beaching operations are conclusive that no amount of prescriptive improvements or protections can remedy the four fatal characteristics of intertidal beaching operations:

1. First there is the impossibility of containing pollutants on a tidal beach where hulls of ships are often breached accidentally or by cutting, or toxic paints erode or are abraded sending persistent organic pollutants, heavy metals and oils onto the beach and into the seawater;

2. Second, due to a shifting and soft wet tidal sand surface, there is the impossibility of rapidly bringing emergency response equipment, including fire-fighting equipment and vehicles, ambulances and cranes along side the ship, to assist or remove persons hurt inside the hull;

3. Third, the impossibility of allowing cranes to work alongside to lift heavy cut sections of a ship and thereby preventing heavy cut sections from being subject to gravity, shifting or falling directly into workers or into the marine environment; and

4. Finally, there is the absolute incompatibility of conducting hazardous waste management operations (which is what they are as long as ships contain hazardous wastes, in the ecologically delicate and vital coastal zone.

These fatal flaws of the beaching method inevitably will result in causing avoidable death and pollution. Please take immediate note of the grave situation in Alang and save the workers and the beach.

MINISTRY OF ENVIRONMENT & FORESTS, GOVERNMENT OF INDIA LAPSING OF THE COASTAL MANAGEMENT ZONE (CMZ) NOTIFICATION, 2008 New Delhi, 22nd July, 2009
1. For the purpose of conserving the coastal environment the Ministry
had issued the Coastal Regulation Zone (CRZ) Notification, 1991 to regulate various
activities in CRZ areas. The Notification has undergone 25 amendments during its
implementation since 1991 to 2009.
2. In order to examine the issues of coastal zones in a holistic manner
the Ministry constituted an Expert Committee under the Chairmanship of Prof. M. S.
Swaminathan in June, 2004. The Committee submitted its Report in 2005. Based on the recommendations of the Committee, the Ministry issued a draft Coastal Management Zone (CMZ) Notification on 1.5.2008 and an amendment to it on 9.5.2008 inviting public suggestions and objections in accordance with Environment (Protection) Act, 1986.
3. Based on the requests made by the State Governments, the draft CMZ Notification was re-notified on 22.7.2008 extending the time period for receiving suggestions and objections.
4. The Ministry received large number of suggestions and objections to
the draft CMZ Notification. In order to examine these suggestions and objections
and to formulate the Coastal Zone Management approach for the country, the Ministry
constituted a four-Member Expert Committee under the Chairmanship of Prof. M. S. Swaminathan on 15.6.2009. The Expert Committee submitted its Report on 16.6.2009 and the Ministry accepted the Report. The Expert Committee in its recommendations has urged that the CMZ Notification, 2008 be allowed to lapse on 22.7.2009. The Expert Committee also suggested that the Ministry may take action to strengthen and implement the existing CRZ Notification, 1991 more rigorously. The detailed line of action in this regard is being chalked out.
5. As per the Environment (Protection) Act, 1986 a draft notification lapses if not
finalized within a period of 365 days from date of issue of the notification.
6. Therefore, and in accordance with the recommendation of the Expert Committee, the draft CMZ Notification stands lapsed as on 22.7.2009. Further, there is no plan to re-notify the CMZ notification.
7. It may be noted that the CRZ Notification, 1991 as amended, continued to be
force and implemented8. The Minister for Environment and Forests has already decided to have necessary
consultations with various stakeholders including fisherfolk and civil society to
seek their comments for strengthening the CRZ Notification, 1991. A detailed plan
for the consultation is being prepared. In the meantime, the existing CRZ Notification, 1991 continues to be in force in its existing form.
Share this article :