skip to main | skip to sidebar
Home » » Finally, Le Clemenceau to be dismantled in UK

Finally, Le Clemenceau to be dismantled in UK 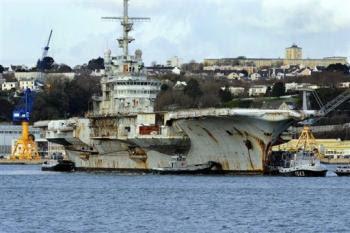 The asbestos-tainted French warship Le Clemenceau is on its last voyage towards a British "ghost fleet" shipyard, where it is to be broken up. It has been towed around the globe in the search for a place to dispose of its toxic hull. Its dismantling will be the biggest ship recycling project ever undertaken in Europe.
The ship has faced protests from environmental groups like Ban Asbestos Networks all over the world from France, India to UK. In 2006, it was stopped from Indian waters when it was heading towards Alang shipbreaking yard owing to occupational and environmental hazards posed to the workers and communities.

It is now known simply as "Hull Q790. Eight small tugs are involved to take it out of a military harbour in the northwestern French port of Brest. It has been hooked up to an English tug, the Anglian Earl, which is towing it to a dry-dock recycling facility at the mouth of the River Tees.

The ship is named after Georges Clemenceau, France's World War I Prime Minister. It saw action in the Lebanese civil war of the 1980s and the 1991 Gulf war too.

A French court has rejected an attempt by a UK environmental group to block the vessel's transfer to England, clearing the way for it to leave.

Environmental groups seem relieved with the fact that the toxic ship is being recycled in UK rather than exported to a country with less stringent safety and pollution rules.

The recycling company Able UK operates a10-hectare dry dock which can accommodate ships up to 366 metres long. Hartlepool-based Able UK will dismantle the 32,700-tonne Clemenceau. alongside existing contracts to scrap four former US naval vessels - dubbed ghost ships - which arrived on Teesside in 2004.
The dismantling work on the Q790 and other vessels is scheduled to begin after Easter.

The ship was launched in 1957, it sailed more than a million nautical miles before being decommissioned in 1997.
Share this article :

nice article upon pollution issue..... i had found more information about basic of pollution issue but this is not sufficient. If you know more please explain.