skip to main | skip to sidebar
Home » » Addicted to Plastic 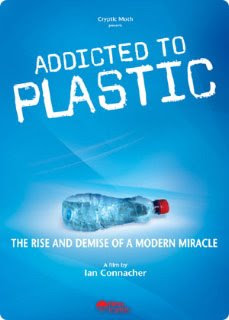 As a species we are starting to choke on our plastic consumption. Sure, people might be reducing their plastic bags and trying to minimize their use of plastic packaging, but plastic remains a lethal substance that permeates every aspect of our North American lives. But where does it all go after we are done with it? Some ends up in landfills, but the rest ends up in the oceans. In fact, marine experts report more than 80% of the plastic found in the oceans actually originates from a land based source. We caught up with filmmaker Ian Connacher to talk about his hot new film, Addicted to Plastic, and find out what happens to plastic after we are finished with it.
Why did you make Addicted to Plastic?
In 2005, I spent a month sailing out to the middle of the Pacific Ocean with Captain Charles Moore of the Algalita Marine Research Foundation. We went out to sample for plastic in an area roughly the size of Western Europe, called the Eastern Garbage Patch. And it wasn't pretty. I personally scooped up fishing nets, bottles, buckets, a fluorescent light tube, a paint roller etc. These larger plastic pieces collect lots of marine life - like barnacles and crabs - which can be transported to foreign waters causing biotic mixing.

Every piece of plastic that's ever been made, except a small amount that's been incinerated, still exists.
—Ian Connacher
What's worse, sunlight and waves break up plastic into smaller and smaller pieces that begin to resemble food for marine organisms. I also learned how plastics repel water but also absorb nasty oils like pesticides and herbicides that flow downstream from farms. In other words, all these little bits become poison pills, available to the whole food chain. I produced a short film entitled, "Alphabet Soup," which showed how plastic travels out to remote parts of the ocean and become adopted into the food chain. It wasn't a pretty story. I wanted to know what could be done to fix this mess. So I quit my job and began to travel around the world in search for solutions. This became Addicted To Plastic.

How long did the film take to make?

Including my trip to the garbage patch, it took approximately 3 years.
Was it a difficult film to make?
Yes. We ended up shooting over 400 hours of footage, which is partly why editing took almost an entire year.
The truth is, only about 5% of all plastic actually gets recycled.
—Ian Connacher
Does the general public know enough about the problems with plastic?
Absolutely not. Most people (at least in North America) think that what they put into the recycle bin actually gets recycled. The truth is, only about 5% of all plastic actually gets recycled. The plastic that is recycled is often plastic bottles turned into plastic chairs or plastic lumber. This, in my opinion, is not recycling. It's downcycling - turning one product into an inferior product. Downcycling doesn't stop new plastic from being made. What's more, there is a disconnect between manufacturers of plastic items and the end-users. With glass, we only have green, clear and brown. With plastic, it's limitless. That means one plastic bottle could have different colors on it as well as different types of plastic (the cap, the wrapper). All these varieties make recycling extremely difficult.

In Europe, governments regulate products based on the precautionary principle, which means a manufacturer must prove their product is safe before it can be put on the market. In North America, private research groups have to prove that a product is toxic before it can be pulled from the shelves. I still don't understand why there are toxic materials on the market when alternatives already exist.

How bad is the plastic problem?

Every piece of plastic that's ever been made, except a small amount that's been incinerated, still exists. That means our landfills, beaches and oceans are overflowing with plastic waste from the last 100 years. North America also ships a lot of our plastic waste to China and India, where the task of recycling is placed on the backs of poor families in appalling conditions. In Delhi, for example, I witnessed families living on top of a landfill, manually collecting scraps of plastic bags and forks and packaging for literally a dollar a day. Toxic ingredients in plastic are also being linked to everything from learning disabilities, heart disease, obesity and cancer.
Is it possible we are ingesting plastic through the fish we eat?
Yes. I personally witnessed the dissection of a Fulmar bird in Holland. The stomach contained two grams of various types of plastic including bags, Styrofoam, hard plastic chunks and nurdles - pre-production plastic pellets. In the Pacific Ocean, Captain Moore conducted trawls for small fragments of plastic in the water and compared the weight of the plastic in the samples to the weight of plankton. Some of his trawls showed as much as 20 times more plastic than naturally-occurring food. Filter feeders like jellyfish, do not discriminate between plastic and plankton.
Why do we use so much plastic?

Plastic is cheap, durable, non-conductive and can be molded into any shape. It makes our food safer, our cars lighter and more efficient and makes modern medicine possible. My film is not out to vilify plastic but, rather, show just how much we are misusing this very valuable material. Packaging, in particular, is getting out of control and much of it is driven by convenience.
Do you use plastic?
Of course. I couldn't make the film without plastic (videotape, cables, my camera etc). But, again, I don't think the material is to blame. I think it is our misuse of the material as consumers, the ineffective recycling policies and lack of producer responsibility.
There is no such thing as disposability.
—Ian Connacher
Can people live a plastic free life?
No. And I don't think that's the point. I think we definitely need to be more conscious consumers but we also need producer responsibility and government protections when it comes to producing alternatives or improving recycling.
What will people take away from seeing your film?
I hope they will take away a better understanding of all the issues surrounding plastic - how there is no such thing as disposability, the disconnect between manufacturers and recyclers, how individuals and companies are making a difference by developing alternatives, and how we can move forward responsibly. I wish I could have put more solutions into the film but I felt that viewers needed to understand just how bad plastic pollution has become and that up to now, it's been invisible.
What can the average person do to help the planet become more plastic free?
Buy a reusable coffee mug. Bring a knapsack to the supermarket. Buy products with minimal packaging. Investigate bioplastic products. Avoid toxic plastics like PVC or polycarbonate. Petition government for better recycling laws. Improve your company's plastic footprint. Pass the information on to younger generations. Remember that when you throw something away, there is no away.
How can people see your film?

You can go to crypticmoth.com for a list of film festivals where Addicted To Plastic will be shown as well as broadcast dates in various countries. If you're an educator or an institution, the film is also available for purchase on the website.
Are you a green guy?
I think I'm a green guy but by no means am I perfect. I've owned a hybrid car, I eat organic, I try to buy local as much as possible, and I make environmental documentaries.