skip to main | skip to sidebar
Home » » Waste-Pickers of Delhi

The original Delhi recyclers have turned garbage into cash for decades. Now, a carbon-credit-generating incinerator may put them out of business. 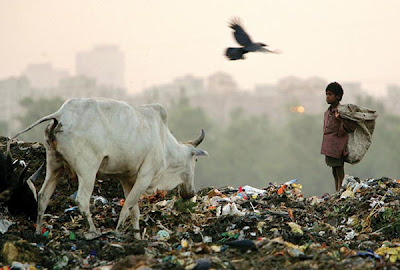 India's waste-pickers—often women and children—join free-ranging cows and other less sacred animals in a daily forage through the garbage of the streets. They've been recycling trash for decades, since long before recycling became fashionable in the West, and in Delhi, a 13-million-person metropolis, the waste-pickers number in the tens of thousands. For slum-dwellers, such recycling of plastic, paper, and metals—anything that can be turned into cash—is often the only source of income.

Bharati Chaturvedi, the director and cofounder of Chintan, a small Indian NGO that provides education to waste-pickers, claims that more than 1 percent of Delhi's population sifts through garbage, recycling as much as 59 percent of the city's waste. "These waste-pickers are providing a public service—for free," she says.

That may soon change. A new waste incinerator that turns trash into electricity is slated to be built in Timarpur, a suburb of Delhi. Because it will reduce the amount of methane off-gassed by landfills, it will generate carbon credits under the Kyoto Protocol. But the incinerator will also emit cancer-causing dioxins, mercury, heavy metals, and fly ash. Are the carbon credits available under Kyoto's Clean Development Mechanism worth putting thousands of impoverished waste-pickers out of business?

Kyoto's CDM was originally established to help finance clean energy projects in the developing world. Under the CDM, carbon credits generated in a poor country can be sold to a rich country, allowing that rich country to count the "emissions reductions" achieved in the poor country toward their own domestic carbon emissions targets. However, the CDM is rapidly becoming a subsidy for some of the dirtier industries—making coal-fired power plants slightly more fuel efficient, for example, or capturing waste heat from steel plants—and some brokers are growing rich on the schemes. The World Bank has handled many of these deals, charging a 13 percent commission on all of the carbon trades it brokers.

The Timarpur incinerator may be the first in a series of incinerators globally to benefit from the burgeoning global carbon market, despite India's informal and effective recycling industry and generally hostile posture toward incinerators. "We had managed to stop half a dozen of these dubious projects in the past," says Gopal Krishna, a public health researcher at Jawaharlal Nehru University in New Delhi. "But this time around, in the name of carbon credits, fraudulent claims are being made with impunity."

In Timarpur's case, the argument goes as follows: Incinerators will generate energy from waste; that waste used as fuel displaces fossil fuel use; thus all of the CO2 emissions that would have been generated had the energy come from fossil fuels should now qualify for carbon credit. To make the offer even more lucrative, incinerator companies can claim they are capturing and burning the methane that would have been released from rotting garbage. Because methane is a greenhouse gas 24 times more potent than CO2, the logic goes, in burning it, this incinerator avoids the release of tons of potent methane gas, releasing its far weaker cousin, CO2. A previous proposal to build a waste incinerator in Delhi in the early 1990s died a quiet death. The reason: "Delhi's garbage doesn't have enough burnable matter," says Neil Tangri of the Global Alliance for Incinerator Alternatives. "It tends to be too wet, containing too much ash and sand and noncombustible inert materials." In other words, it doesn't contain much combustible material like plastic and paper—thanks in large part to the diligent waste-pickers.

A white paper produced by India's Ministry of Environment and Forests in 1997 concluded that incineration in the Delhi region was "not feasible" and that composting was the preferred route.

Such projects are a far cry from the "clean development" the CDM was intended to subsidize. However, there are more concerns: how to dispose of fly ash, the remains of incinerated waste. "I've been all over India," says Patricia Costner, science adviser to the Global Alliance for Incinerator Alternatives (GAIA) and to the International POPS Elimination Network. "I know what happens to incinerator ash. Most of it ends up by the side of the road. There are no engineered landfills in India. Fly ash and bottom ash is required to be managed very carefully in most countries, but in India, they simply do not have the infrastructure to do that."

The improper disposal of incinerator waste presents a new problem for Delhi's poorest residents. "When waste-pickers are denied access to the waste stream, they go through the ash, looking for metal, the only substance to survive incineration intact," says Neil Tangri, waste and climate change campaign director for GAIA. "I've seen people thigh-deep picking through incinerator ash for metals. You're using the human body as a toxic absorber—you're basically spoon-feeding it to these people."

According to Tangri, the waste-pickers are now being harassed and denied access to the dry, high-calorie items the incinerator will devour. "They are effectively denying a livelihood to the poorest of the poor in setting up this incinerator," says Chaturvedi. "To take that miserable existence away, it's criminal. And now we're seeing skyrocketing food prices. What will these people do? Huge local skills in recycling are now being wiped out, skills essential for a sustainable society."

Wysham is a fellow at the Institute for Policy Studies in Washington, DC, and cohost of Earthbeat Radio.