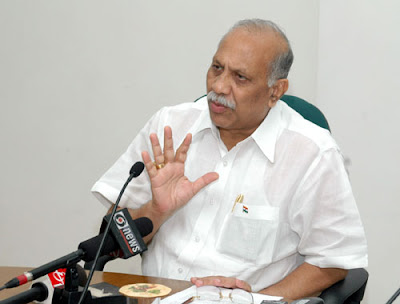 Note:
Similar plants are proposed in Patna,Gurgaon, Navi Mumbai, Bangalore and Pune. Some 31 such plants are proposed all over the country as misplaced carbon credit projects.Such proposals expose the truth about carbon trade. (In the picture: Vilas Muttemwar, Union Minister for New and Renewable Energy responsible for promoting the toxic technology)..

04/8/2008 New Delhi: Land handover ceremony for the incineration based waste to energy (WTE) project that proposed in the residential area of Okhla (Sukhdev Vihar) was cancelled today amid bitter and almost violent protest from the residents. As a consequence, the scheduled transfer of land from NDMC to Jindal Urban Infrastructure Ltd for the proposed plant did not happen.

Residents including men, women and children turned up in huge number at the proposed plant site to express their anguish and against the company and Delhi government for ignoring grave public health concerns emanating from the toxic plant that would have inter-generational health impacts.

Jindal Urban Infrastructure Ltd has won the Rs.200-crore contract for setting up this plant. It has secured a contract from New Delhi Waste Processing Company Limited, a joint venture between the Delhi Government and Infrastructure Leasing and Financial Services Ltd. (IL&FS), to develop the 16 MW waste-based power plant in the city. The Union Ministry of New and Renewable Energy has a policy and a Master Plan to give subsidy to promote such projects. The raw material would be supplied to the company by the New Delhi Municipal Council (NDMC) and the Municipal Corporation of Delhi.

Earlier, a team led by Rajendra Kumar, Secretary (Power) and Dr Ajay K Singh, Additional Secretary (Power), Delhi Government visited the site of the proposed waste-to-energy project at Okhla Sanitary Landfill site to look into the complaints of the residents of Sukhdev Vihar and Haji Colony on 19 July 2008. Residents were extremely angry and upset about the ill-conceived planning by the government authorities. They also showed him the water tank, which is located merely 100 meters away from the proposed site. The authorities did not know this earlier. They also fear that the proposed plant will be using large quantity of municipal solid waste containing plastic material, and would surely affect the health of the 200000 residents living close to the proposed site. Political leaders from the area categorically stated that they would not allow setting up such a hazardous pant that too in the residential area. Besides, the proposed plant is in violation of Supreme Court's order that has permitted only Biomethanation -a biological treatment technology. This matter came up for hearing hearing in the apex court on 28th July, 2008.

Residents in Sukhdev Vihar and Hazi Colony are rightly alarmed at the prospect of this incinerator plant from coming up in their city. Dioxins travel long distances in the atmosphere and is found on plants, in water, soil, grazing animals and humans.

The plant is located inside dozens of densely populated residential colonies. When the policy of the government is to shift or relocate all existing industries whatsoever from the residential areas, Why double standards? This is surely going to have serious health hazards for all the residents for all times to come. More than 1000 people turned up to oppose the project.

The proposed Refuse Derived Fuel (RDF) combustion technology that is to be used in the plant for electricity generation has failed in Timarpur, Delhi in 1990. Similar plants have failed in Andhra Pradesh too. Delhi Waste Master Plan rfers to it as a polluting technology that is adopted in countries whose environmental standards are lax.

The use of RDF implies burning of mixed waste including plastics and paper, to gain calorific value (up to 3000 kcal) of what is otherwise a low energy mix. (500 kcal). As per the Municipal Waste Handling and Management Rules, the combustion of PVC plastics is banned. In the making of RDF, we see no practical possibility of PVC plastics being segregated (from other plastics) in the waste stream since there is no labeling of such plastics as PVC or non-PVC, nor are PVC plastics picked out separately by waste pickers. In fact they pick out all plastics.

Combustion or incineration of waste is one of the key sources of dioxins worldwide. It is highly dangerous from a public health perspective. Dioxin particles are stored in fatty tissue and will accumulate to create "buildup" when low-level exposure is continual. It was used as a chemical weapon in the US-Vietnam war.

Dioxin is a human carcinogen. Non-Hodgkin_ s lymphoma and cancers of the liver, lung, stomach, soft and connective tissue have been associated with dioxin.

Even at very low exposure, at levels of parts per trillion, dioxin causes immune system damage, hormone disruption, and reproductive and development effects. Some newer emission control devices have been effective in decreasing recorded dioxin air emissions from incinerators, but there is no safe level additional exposure to dioxins. This is because the average daily dioxin intake for is already 200 times higher than what the US Environment Protection Agency (USEPA) defines as a safe dose for adults.

Those most at risk of receiving the highest concentrations are babies. Studies also show elevated levels of dioxin in the blood of people living near municipal solid waste incinerators when compared to the general population. Similar projects are proposed in Timarpur and Ghazipur in Delhi.

Such projects are against the cardinal principles of sane waste management-Reduce, Reuse and Recycle. There is no alternative to a Zero Waste Initiative that includes-waste minimization, waste segregation at source and biological treatment method.