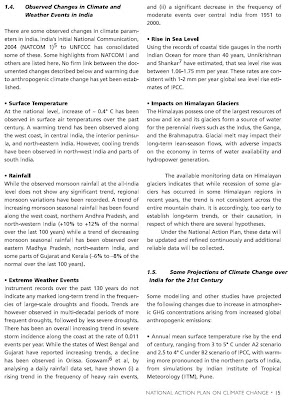 Quite like the Chinese National Action Plan on Climate Change, Indian plan too ignores corporate acts of omission and commission and society’s role in responding to it. Both are visionless documents. The Indian plan was drafted by 22-experts who are part of the Prime Minister’s committee on the country’s national action plan for dealing with adverse impact of climate change.

While pious declarations may have some merit, it is the commensurate action that exposes the current efforts that are supposedly undertaken for mitigating climate change.

Such an action from India as elsewhere includes giving host country approval for 969 carbon trade projects as of June 2008 that includes 18 municipal solid waste projects. Out of the 969 projects, the UN’s Executive Board of Clean Development Mechanism (CDM) has registered 340 projects. Rajesh Kumar Sethi, an Indian official, currently heads it.

India accounts for about 32% of the world total of 1081 projects registered with the Board. About 493 million certified emission reductions (CERs) are expected to be generated until 2012 if all these host-country approved projects in India go on stream. As of June 2008, 152.4 million CERs had been issued to projects worldwide, of which India accounted for 28.16%.

Is this carbon trade mitigating climate change? Are these projects altering carbon intensive consumption, production and life style pattern? Has society been involved in it? Till date no action plan on climate has looked at the stratification within the society and how corporations have seceded from the society even as their pollution remains externalized.

There is a need to be rigorous when one talks about human intervention as cause for adverse climate change. Both the Inter-Governmental Panel on Climate Change (IPCC) survey reports and National Action Plan on Climate Change (NAPCC) lack that rigor by failing to differentiate the carbon footprint of the various income classes in the countries. The average CO2 emissions of an individual from the highest income group of above Rs 30,000 (1494 KG) is 4.5 times that of one from the lowest income group of below Rs 3000 per month (335 Kg). 14% of the Indian population, which earns more than Rs. 8,000 / per month, contributes to 24% of the country’s CO2 emissions.

Actual data on India’s greenhouse emissions is yet to be compiled, the present data goes back to 1994. In 1994, per capita emission were just 0.87 tonne per person per year which according to an estimate has increased to 1.1 tonnes per person which still very ‘low’ compared to developed countries. The US emits roughly 20 tonnes green house gas compared to 4 tonnes by China. What is missed most of the time is that "per capita" and "averages" do not tell the whole truth.But both the Indian and the Chinese action use "per capita" emission and consumption to pontificate their policy prescriptions. Not surprisingly, such flawed diagnosis of the crisis fails to conceive any remedy to the disease caused by industrial pollution since 1750.

Lack of efficient public transport systems adds to the carbon intensity of the lifestyles of income groups who can afford private transport. Ironically, it is this very income group that is theorizing and setting the tone for action on climate crisis as has been the case in water crisis and other matters.

Thus, the present narrative on dangerous interference with the composition of the atmosphere does not address the issue of climate justice head on both nationally as well as globally. In fact it is a classic case of tragedy of commons.

The eight priority National Missions listed in the National Action Plan include:

The action plan described climate change effects and outlines policies and measures China will adopt, said a statement from the State Council without describing specific policies and measures. Also in the plan, China clarified its basic stance on global warming and called for international cooperation. A statement from the government noted that China would adhere to the principle of "common but differentiated responsibilities" in the UN Framework Convention on Climate Change.

Here are excerpts from the 62-page action plan details the policies and measures China will take to mitigate and adapt itself to climate change.

1. Observations and Trend of Climate Change in China
The Third Assessment Report of the Intergovernmental Panel on Climate Change (IPCC) has clearly indicated that most of the global warming observed over the past 50 years was likely induced by the increase in concentrations of greenhouse gases (GHGs), such as carbon dioxide (CO2), methane (CH4), and nitrous oxide (N2O), due to human activities. In the context of global warming, climate in China has experienced noticeable changes over the past 100 years as well. The major observed evidence of climate change in China includes the following:
─ Temperature. Annual average air temperature has increased by C during the past 100 years, which was slightly larger than the0.5~0.8 average global temperature rise. Most of the temperature rise was observed over the last 50 years. The regional distribution of the temperature changes shows that the warming trend was more significant in western, eastern and northern China than in the south of the Yangtze River. The seasonal distribution of the temperature changes shows that the most significant temperature increase occurred in winter, and 20 consecutive warm winters were observed nationwide from 1986 to 2005;
─ Precipitation. In the past 100 years, there was no obvious trend of change in annual precipitation in China, but there exists considerable variation among regions. The annual precipitation decreased gradually since 1950s with an average rate of 2.9 mm/10a, although it increased slightly during the period of 1991 ~ 2000. The regional distribution of precipitation shows that the decrease in annual precipitation was significant in most of northern China, eastern part of the northwest, and northeastern China, averaging 20~40 mm/10a, with decrease in northern China being most severe; while precipitation significantly increased in southern China and southwestern China, averaging 20~60 mm/10a;
─ Extreme climate/weather events. The frequency and intensity of extreme climate/weather events throughout China have experienced obvious changes during the last 50 years. Drought in northern and northeastern China, and flood in the middle and lower reaches of the Yangtze River and southeastern China have become more severe. The annual precipitation in most years since 1990 has been larger than normal, with the precipitation pattern being a dipole, corresponding to frequent disasters in the North and flood in the South;
─ Sea level. The rate of sea level rise along China’s coasts during the past 50 years was 2.5 mm/a, slightly higher than the global average;
─ Glaciers. The mountain glaciers in China have retreated, and the trend is accelerating.
The trend of climate warming in China will further intensify in the future. The projections by Chinese scientists indicate that:
─ The nationwide annual mean air temperature would increase by 1.3~2.1C in 2020 and 2.3~3.3C in 2050 as compared with that in 2000. The warming magnitude would increase from south to north in China, particularly in northwestern and northeastern China where significant temperature rise is projected. It is estimated that by 2030, the annual temperature would likely increase by 1.9~2.3C in northwestern China, 1.6~2.0C in southwestern China, and 2.2~2.6C in the Qinghai-Tibetan Plateau;
─ Precipitation in China would possibly increase during the next 50 years, with a projected nationwide increase of 2~3 percent by 2020 and 5~7 percent by 2050. The most significant increase might be experienced in southeastern coastal regions;
─ The possibility of more frequent occurrence of extreme weather/climate events would increase in China, which will have immense impacts on the socio-economic development and people’s living;
─ The arid area in China would probably become larger and the risk of desertification might increase;
─ The sea level along China’s coasts would continue to rise;
─ The glaciers in the Qinghai-Tibetan Plateau and the Tianshan Mountains would retreat at an accelerated rate, and some smaller glaciers would disappear.
Share this article :