Some 24 members of the Like Minded Developing Countries (LMDC) and 55 countries of the African Group (AG) comprising 54℅+17℅=71 ℅ of world population have been excluded from unjust 26th Conference of Parties (COP26) of United Nations Framework Convention on Climate Change (UNFCCC). This situation creates a compelling logic for adoption of the third commitment period under the Kyoto Protocol for post 2020 period because the 37 countries failed to comply with it with impunity.

The COP 26 negotiators suffers from poverty of imagination under the influence of corporations which have made nation states subservient to their naked lust for profit at any cost. These 37 countries played a notorious role in killing the Kyoto Protocol and replacing it with a non-binding treaty.

Let us recall how at COP 21 in Paris, on 12 December 2015, the Parties to the UNFCCC reached a voluntary agreement (Paris Agreement) to combat climate crisis. The Paris Agreement was framed pursuant to Washington Declaration that envisaged extinction of common but differentiated responsibilities (CBDR) principle. Developing countries were made to agree to undermining of CBDR principle using donor' influence over them.

The key polluters paid lip service instead of actions and investments needed for a sustainable low carbon future. The trend of insincerity continues to envelope COP26. The key polluters would like people to forget that they failed to meet the targets for the first commitment period of the Kyoto Protocol (2008-2012) that required them to reduce emissions of the six main greenhouse gases, namely, Carbon dioxide (CO2); Methane (CH4); Nitrous oxide (N2O); Hydrofluorocarbons (HFCs); Perfluorocarbons (PFCs); and Sulphur hexafluoride (SF6).

Under the Protocol, limit was imposed on the maximum amount of emissions (measured as the equivalent in carbon dioxide) that a Party may emit over a commitment period in order to comply with its emissions target, country’s assigned amount. The individual targets for 36 countries included in Annex B to the Kyoto Protocol for the first commitment period and their emissions targets included EU, US, Canada, Japan, Croatia, New Zealand, Russian Federation, Ukraine, Australia. US did not to ratify the Kyoto Protocol. In December 2011, Canada withdrew from the Kyoto Protocol effective from December 2012.

The Protocol had extended the 1992 UNFCCC that commits state parties to reduce greenhouse gas emissions, based on the scientific consensus that (part one) global warming is occurring and (part two) that human-made CO2 emissions are driving it. The Protocol was adopted in Kyoto, Japan, in December 1997. It had entered into force in February 2005.

As a consequence of the insincerity of the key polluters, the 36 countries global emissions increased by 32% from 1990 to 2010.

In a stark demonstration of the dishonesty and insincerity of the 37 highly polluting countries, the Doha Amendment to Kyoto Protocol for the second commitment period entered into force only 31 December 2020 on the expiry of second commitment period, making all talk of combating climate crisis by these 37 countries even under Paris Agreement totally untrustworthy.

In a clear illustration of how international law is just a declaration of pious intentions, Paris Agreement entered into force in November 2016 within 6 months of its adoption, prior to the entry of force of the second commitment to the Kyoto Protocol, a classic case of putting the cart before the horse. In effect, it is crystal clear that Washington Declaration was aimed at killing the Kyoto Protocol. There was no need for non-binding Paris Agreement, there was a requirement 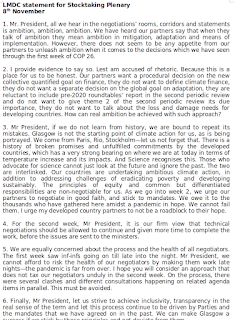 for adopting third commitment period of Kyoto Protocol for 37 countries.

It is high time for the G-79 (LDMC + AG) and G-77 (134 counties) to unsign the Paris Agreement, and demand amendment of the Kyoto Protocol for the third commitment period.

The Paris Agreement suffers from poverty of ambition to combat climate crisis. It must be realised that Paris Agreement cannot keep global temperature rise below 2° C above pre-industrial levels. It suffers from poverty of competence to pursue efforts to limit the temperature increase even further to 1.5° C. It will never make finance flows consistent with a low GHG emissions and climate-resilient pathway. Unless the entire focus is brought on the “nationally determined contributions” (NDCs) of the 37 countries in pursuance the spirit of the Kyoto Protocol, there cannot be climate justice.

It may be recalled that the Conference of the Parties serving as the meeting of the Parties to the Paris Agreement (CMA) that met for the first time along with COP 22 of UNFCCC in Marrakesh in November 2016 was as uninspiring as the COP21. It revealed that jargons like 'climate neutrality' are inconsequential.

The Paris Agreement is an exercise in linguistic sleight of hand with regard to binding commitments vis-a-vis economy-wide reduction targets.

It is increasingly evident that market-based approaches involving carbon pricing, monetisation and claims of transferal of mitigation outcomes are simply an exercise in fishing in the troubled waters.

The Warsaw International Mechanism, on a cooperative and facilitative basis with respect to loss and damage associated with the adverse effects of climate crisis is an exercise in verbal gymnastics.

The Financial Mechanisms like the Green Climate Fund (GCF) do not serve the cause of combating climate crisis and international cooperation on climate-safe technology development and transfer.

The Paris Agreement's transparency and accounting system must be seen in the context of right to anonymity extracted by the transnational investors.

No effort at combating "dangerous interference in the atmosphere", the polite word for war on mother earth can succeed unless these efforts are conducted along side the efforts of the UN's Open-ended intergovernmental working group on transnational corporations and other business enterprises with respect to human rights.

It may be recollected that at its 26th session, on 26 June 2014, the Human Rights Council adopted resolution 26/9 by which it decided “to establish an open-ended intergovernmental working group on transnational corporations and other business enterprises with respect to human rights, whose mandate shall be to elaborate an international legally binding instrument to regulate, in international human rights law, the activities of transnational corporations and other business enterprises.”

In such a backdrop, G-79 and G-77 countries must act prior to the “global stocktake” and put in place the  framework for the third commitment period to the Kyoto Protocol. These countries must combine their efforts with work underway for a binding treaty for regulating TNCs and other business enterprises for making them subservient to interest of climate and communities. There can be no climate solution without regulation of TNCs who have hijacked national governments in general and in the 37 countries in particular.

The proposed third commitment period of Kyoto Protocol under UNFCCC must factor in the role of weapon manufacturers including nuclear weapon owners who are the biggest polluters, they constitute an unacknowledged cause of climate crisis.

It has come to light that Pentagon budget makes USA, a bigger polluter than 140 countries combined. US military is the largest emitter of green house fases. It may be recalled that it was US government managed to incorporate fake climate solution-carbon trade in the Kyoto Protocol. The dilution of Protocol was conceded by EU and others to keep USA as a party to the Protocol. USA became a party to the Protocol but subsequent to the dilution it unsigned the treaty. By doing so it boycotted both the first and the second commitment period to the Kyoto Protocol. LDMC and AG must reject fake solutions to the crisis. The EU should recall and re-adopt it's original position against carbon trade.

In order to combat climate crisis, to begin with weapon owners and the 37 countries must be made to ratify the UN treaty on prohibition of nuclear weapons which came into force from January 2021.

The author is a law and public policy researcher has been tracking and critiquing climate negotiations since 1999.